It has been 30 years since the United States of America sealed itself off from the rest of the world. complaining of unfair tariffs and weak trade agreements. Actual physical barriers and electronic defenses which prevented any plane or drone from entering American air space were activated almost overnight. Additionally, no electronic signal could be broadcast out, or in. It was truly one nation indivisible.

For the span of a generation life went on, with most nations falling under the control of two great empires; the Alliance Euro-Afrique and the Pan-Asia Prosperity Zone. Then came the plague called Sky, which threatened to destroy what remained of humanity.

Hope came in the form of a broadcast from inside the USA. A Dr. Samuel Elgin confirmed that they had continued to watch the outside world and had grown worried about the Sky plague. Thankfully, they had developed a cure and were willing to share it with both empires.

An envoy party was formed, made up of diplomats from each empire, a single journalist, a pilot, an expert on American culture, a medical doctor and expert on the Sky plague and the one soldier who came closer than anyone to sneaking into America after the walls went up. Thus begins the story of the first expedition into a changed America… 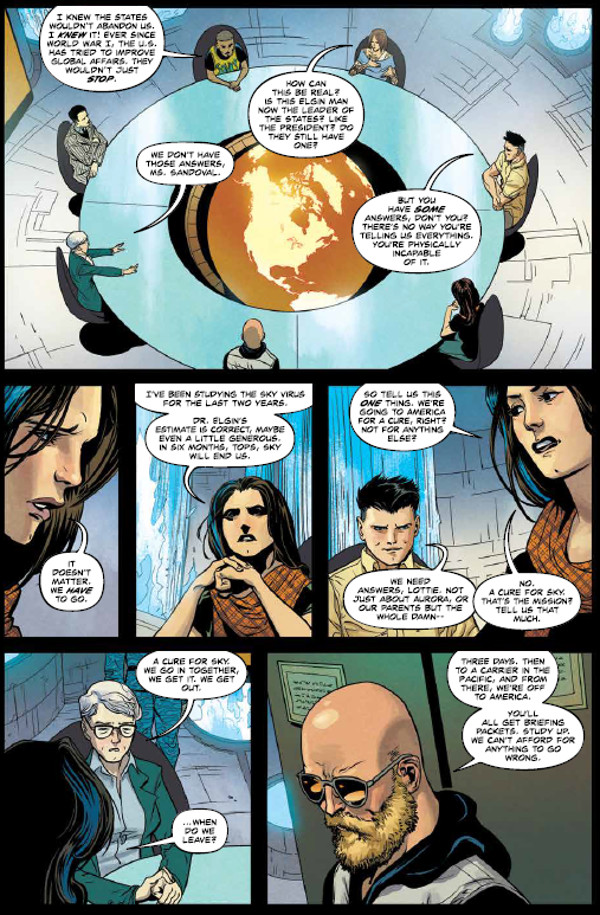 There are times I find it more difficult to review a book I love than one I consider mediocre or outright awful. I fear that I gush over the good points to an embarrassing degree, making hyperbolic statements and losing any mask of impartiality I might claim as a cultured critic. I find myself in such a situation considering Undiscovered Country #1 and how to discuss it without sounding like a screaming fanboy.

Quite honestly, this should be an easy book to review, produced as it is by a team of all-star creators at the top of their game, who shouldn’t need any introduction. Scott Snyder and Charles Soule? Both fine writers on their own and absolutely exquisite working together. Giuseppe Camuncoli and Daniele Orlandini? A dream team from Star Wars: Darth Vader, together again. 2019 Eisner Award-winning colorist Matt Wilson? Amazing. Throw in lettering by Crank! and I could call it a day just listing who is involved in this production and naming every amazing book they worked on before. But that would be too easy.

It spoils little to reveal that there are complications in coming to America, and our protagonists soon find themselves contending with surviving the usual post-apocalyptic perils. While the basic trappings will be familiar to genre enthusiasts (i.e. mutant animals and bands of raiders alongside curiously advanced technology) the world built by Soule and Snyder is far more unique than first appearances would suggest. The artwork matches the story blow for blow, and proves its power on every page.

I will allow myself one bold prediction; Undiscovered Country will be the next Saga. Not just because it is a great work of imagination (although it is that) but because it will be the independent title everyone goes gaga over and wonders “Why didn’t I pick that one up when it first came out?” Don’t let that happen to you. Pick up Undiscovered Country as soon as possible. Do it for America.