(NOTE: This review is of the now-infamous original release of CATS, rather than the patched version that was hurriedly sent to theaters on the morning of December 22, 2019.)

I had not planned to review Cats: The Movie. Indeed, I hadn’t planned to see it. Like many writers with a theatrical background, I detest the original musical Cats for everything it represents; the triumph of spectacle over substance.

Do not misunderstand me. The musical Cats, done properly, offers some fantastic visuals. The costumes and make-up were phenomenal for their time and set a new standard for West End and Broadway productions. That being said, while the show has style, it lacks a story. The entire show is just an excuse to have young, fit dancers to crawling around on all fours in fur-suits. Honestly, I’d suspect Andrew Lloyd Weber of being a closet furry but that would imply that he was at all restrained in hiding his fetishes after he turned his erotic Thomas The Tank Engine fan fiction into Starlight Express. 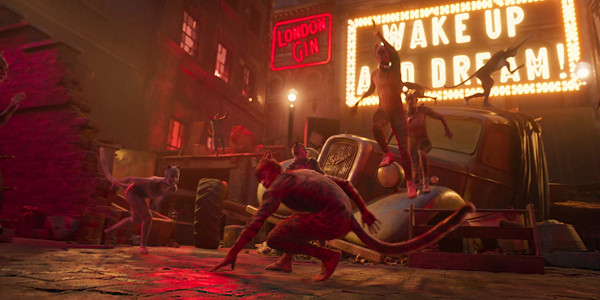 The plot of Cats, such as it is, centers upon a house cat named Victoria (Francesca Hayward), who has just been abandoned on the streets of London by her owner. She is found by The Jellicles – a tribe of cats who come together once a year for The Jellicle Ball. It is there that one Jellicle Cat is chosen to ascend to the Heaviside Layer, where they will be reborn into a new Jellicle Life and get to be the Jellicle Cat they always dreamed of being. 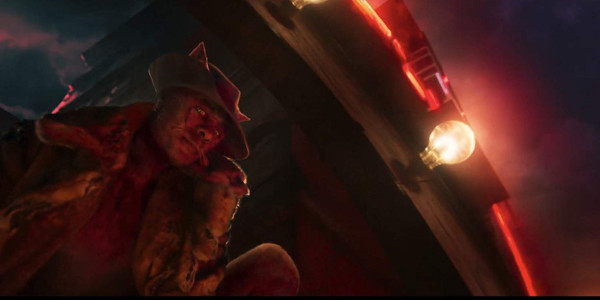 The film ads a new Jellicle wrinkle, with Macavity kidnapping his fellow Jellicle contenders after they perform and spiriting them away to a barge, where they are held by his accomplice, the pirate cat Growltiger (Ray Winstone). (In the original show Growltiger was a role once performed by Gus, The Theatre Cat (Ian McKellen), who had a separate song about his greatest role.)

With all of the other Jellicle contenders trapped on a barge, Macavity hopes to win by default after making his grand entrance, as his praises are sung by the cat Bombalurina (Taylor Swift). Naturally, the plan fails, forcing him to kidnap Old Deuteronomy, at which point the original Jellicle plot of the Jellicle stage show reasserts itself. 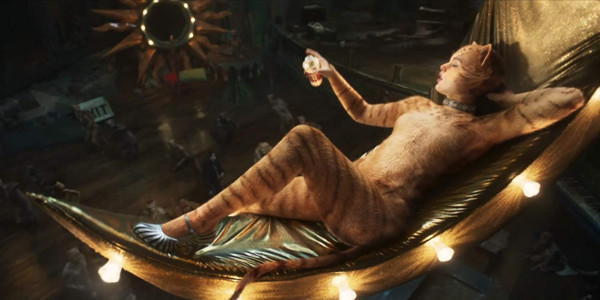 If it seems like I am spoiling the plot for you, dear reader, don’t worry. I describe all this only because the vast majority of you will likely be lost five minutes into the film because so little is explained. I suppose in that respect the show does capture the attitude of the common cat, who feels no need to explain itself. But I am here to discuss the film and not outline the flaws of the stage show beyond the degree to which they influence the movie. So how does Cats: The Movie stand as its own beast? Quite poorly, I’m afraid.

As I said before, the primary appeal of Cats lay in the spectacle of its production; the rich costumes and make-up, the physicality of the dance, the poetry of T.S. Elliot set to music. The music is there, as is the physicality. But that final element – the costumes and make-up – is where Cats falls and fails to land on its feet. Rather than make the actors perform in heavy make-up and costumes over the span of a lengthy film shoot, the producers elected to do everything with CGI, placing the faces of the singers on the bodies of dancers and then adding fur suits onto the dancers digitally to create the cats. The end result is off-putting to say the least. 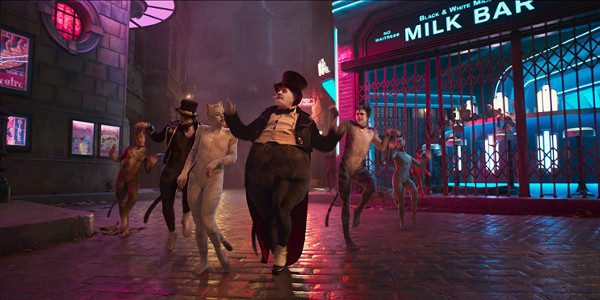 Ironically the same focus on spectacle which redeemed Cats the stage show is what sinks the film, with the digital costumes proving utterly inept at conveying the characters who are the core of the show. There are moments where the CGI used to render the actor’s faces is on par with the The Annoying Orange. At other times, the cats dancing in the background appear as though the “realistic” beings from The Polar Express are performing a skit at a furry con. At all times the characters have human hands without claws or pads and oddly smooth faces without a hint of hair. Forget about your uncanny valleys; Cats The Movie digs a Grand Canyon into its sandbox that still isn’t big enough to bury this load of a film.

To the credit of the actors, most of them do try to work with the material they have and manage to convey the essential humanity of the cats, despite the CGI working against them. Ian McKellen is an effectively melancholy Gus, singing of his glory days on the stage even as he laments that he, like the theatre “is certainly not what it was.” And while theatre purists have taken Taylor Swift to task for daring to write an original song for the movie’s soundtrack, Swift’s jazzy take on “Macavity” is one of the most lively moments of the movie, whatever else may be said about her work. 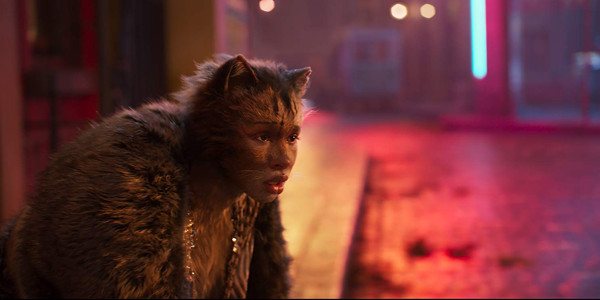 By contrast, Dame Judi Dench does little but offer her presence, languidly lounging and appearing as though she were mentally calculating just how much money this farce is adding to her grandchildren’s college fund as the film progresses. And then we have those actors who are trying too hard. Jennifer Hudson’s primary accomplishment as Grizabella is finding a way to take the three-minute song “Memory” and stretch it out to six minutes. Rebel Wilson and James Corden are also on hand to ham it up and show that even in this enlightened age of political correctness you can still get away with making fun of fat people. Or fat cats, as it were.

I find myself baffled as to who the intended audience for this movie was. Fans of the original musical will be horrified by the changes. Theatre geeks who loathed the original will find none of their complaints addressed. Even those trash cinema aficionados like myself who think nothing of paying good money to see films like Birdemic at the late night double feature picture show will have little reason to try and riff this turkey, now that Universal Pictures has reportedly spent another $100 million in two days to edit the film’s atrocious CGI into something watchable. I doubt they’ll be successful, but I feel no need to pay another $8.00 to find out for sure.

I do wonder, however, at the larger implications of new CGI being released for a movie on its opening weekend. I’ve already seen some of my fellow gamers joking on Twitter about how we many soon see movies follow video games in releasing downloadable content that alters the original work. Personally, I’m holding out for the day where modders can alter movies to insert actors into films they didn’t originally star in. Perhaps in a year those who dislike Taylor Swift can see Cats with Emma Stone as Bombalurina?

Ironically had Universal Studios left well enough alone this might have become the new Rocky Horror Picture Show that some critics compared it to and ultimately broken even as a cult film. It’s a flawed comparison, however, as for all of its flaws Rocky Horror had heart and guts. Cats, on the other hand, is made up of the assorted meat byproducts that are used to make the really cheap brand of pet food. It’s bad, but it is not bad enough to be the stuff of legend.