Stream This? is a feature devoted to exploring and reviewing some of the lesser known and often-times weirder films that can be found on various streaming services. Today, Roy Buckingham examines the 2019 horror film Verotika. 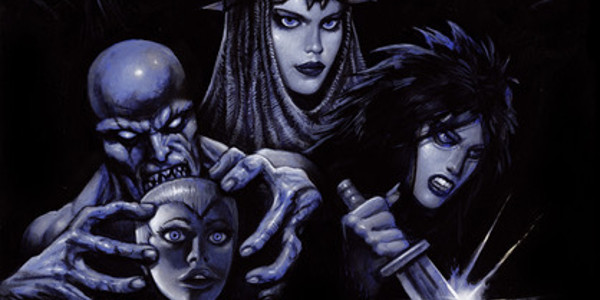 Glenn Danzig is best known for being part of the band The Misfits and recording a song where he shouts the word “Mother” a lot. What many do not know is that Danzing is also the creator of an erotic horror comic book company known as Verotik. Apparently upset with the fact that not many know this and intending to capitalize on all the other comic book movies that are making big bucks these days, Danzing made a horror anthology film based around the comics produced by said comic book company. The result is the horror anthology Verotika; a film that is the cinematic answer to the question “Is is possible in this day and age to make a worse movie than ‘‘Manos” The Hands of Fate?”

Shot with what appears to be a budget comparable to the notorious 90’s Sega CD video game Night Trap, Verotika is an erotic horror anthology so obscure that it does not have a Wikipedia page, despite being almost a year old. We are introduced at the beginning to Kayden Kross as Morella; a typical horror hostess who refers to us as her nasties. Kross tries her best to be Elvira but comes off as a college-prep girl who just discovered Hot Topic and now thinks she’s suddenly Goth. She then guides us into three disjointed and misguided stories, which are full of more plot holes and undeveloped subplots than anything Tommy Wiseau ever produced.

First, we get “The Albino Spider of Dajette.” Yes, that’s the title. Here we meet Dajette; a French girl who speaks exactly like the French girl from the popular YouTube series The Most Popular Girls in School. We are introduced to her in an awkward sex scene that shows us that Danzig is either a virgin or a lousy lay in bed. In either case, an albino spider watches her have sex with some random French guy, only to witness this sensual scene interrupted when we discover Dajette has eyes where her nipples should be.

Why? We never find out. It’s the “I definitely have breast cancer” moment of the film. After that, Dajette’s tears fall onto the albino spider, turning him into an eight-armed manifestation of anger who will kill when Dajette sleeps, until she gives her body to him. That’s it. That’s the whole story.

Our next segment is called “Change of Face.” It features a female serial killer running around cutting the faces of women and make them into flesh masks to to cover her face. Why? So she can strip as a masked stripper at a club named Pussy Arts. Seriously. This stripper goes all Ed Gein on other women just to cover her face up with a mask when she strips, despite wearing the faces of other women to cover her own disfigured face. I assure you it makes just as much sense watching this play out as it did to just read that last sentence.

Finally, we get “Drukija: Contessa of Blood.” This final story is a modern-day variation on the legend of Elizabeth Bathory; allegedly the most prolific female murderer ever, who was said to bathe in the blood of virgins. This segment focuses upon the Contessa as she randomly kidnaps Playboy models and slits their throats to bathe in their blood, while her female assistant jumps around in glee watching. That is the entire story. There is no conflict or resolution. Just blood-covered boobies

I am sure upon reading this review my fellow connoisseurs of trash cinema will want to run to this film like flies on poop. This is a definite caveat emptor situation, folks. It is what made me run to the film as well, after hearing it being described as The Room-level horrible.

The difference is that while The Room is bad, it is also fun to watch. Verotika is painful to endure. I dare say this is most painful film I have seen in my entire life. (And you know coming from me that is saying a lot!) If you want to rent this film and watch it online, know that you may want to put your expectations somewhere down around From Justin To Kelly when it comes to how bad this film is. Just a warning.

Self admitted horror nerd and homosexual. Keeper of too much useless trivia when it comes to cult cinema and films no one should even be watching in the first place. For some damn reason, actually watched From Justin To Kelly on purpose. View all posts by Roy E Buckingham