Stream This? is a feature devoted to exploring and reviewing some of the lesser known and often-times weirder films that can be found on various streaming services. Today, Matt Morrison examines the 1988 post-apocalyptic film The Sisterhood.

Finding myself thinking about the end of the world and in need of a good laugh, I decided to scour Amazon Prime in search of a good, cheesy post-apocalyptic movie in the same spirit as She. What I found instead was The Sisterhood – a movie with a surprisingly feminist story under its Vallejoesque cover art.

The year is 2021 and society has collapsed in the wake of nuclear war. The wasteland has been taken over by brutal warlords building armies made up of fighting men and women are nothing but property under the new order. The one exception to this is The Sisterhood – a legendary nomadic society of warrior women it is said also possess magical powers, who fight to reestablish the way of things before the war when both sexes were equal. Well, slightly more equal, to be honest, but still better off than they are now. 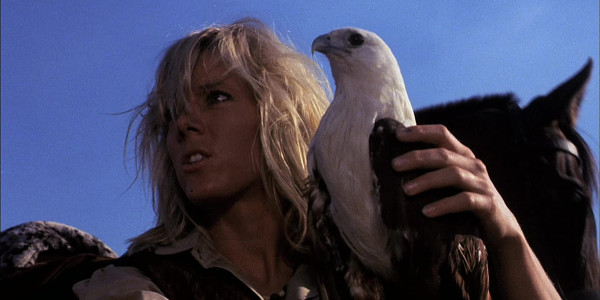 We are introduced to The Sisterhood through the eyes of two characters – Marya (Lynn-Holly Johnson) and Mikal (Chuck Wagner). Marya is a young woman who has developed the power to talk to the falcon she’s raised since it was a chick, much to the annoyance of the men in her hold, who have little use for teenage girls who think they are witches. Mikal is a soldier-of-fortune who was fine with his life of looting, pillaging and raping until he found himself in the employ of a warlord who had no problem with butchering children.

Mikal and Marya are drawn together by destiny after Mikal kills Marya’s younger brother in the heat of battle, not realizing the enemy attacking him was a prepubescent boy. With her home fortress destroyed, Marya swears revenge, follows Mikal, gets menaced by the thugs who exist only to menace young women in a story like this (usually with some line about “liking a girl with spirit”) and falls under the protection of two members of The Sisterhood who just happen to be in the same bar; the telekinetic Alee (Rebecca Holden) and Vera (Barbara Patrick) who has a healing touch. 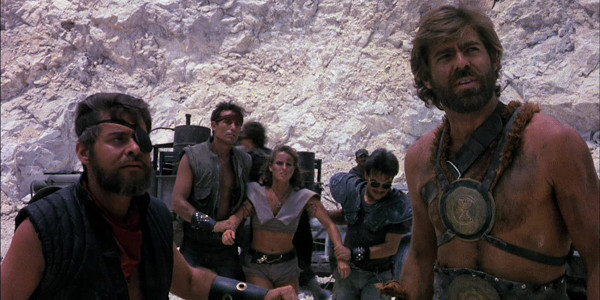 This, in turn, gets Mikal’s interest, as he has a personal grudge against the Sisterhood, who recruited his older sister when he was a boy, leaving him to the not so tender mercy of the wasteland. This leads Mikal and his gang to kidnap Vera and hook up with another gang of raiders that are heading for the safety of the fortress of another warlord, who was somehow able to capture over a dozen of The Sisterhood. The rest of the movie round-robins between the two groups ambushing each other, until Vera, Alee and Marya attack the fortress using the guns and tank they conveniently stumbled across in a pre-war bunker. They do this despite the Sisterhood taking a vow to use only their powers and bows and swords in self-defense against their would-be oppressors.

Why? It never really gets explained, much like the mythology behind the Immortals in Highlander. Why are only women manifesting superpowers after the apocalypse?  Who is the Reverend Mother who leads the Sisterhood? Your guess is as good as mine. 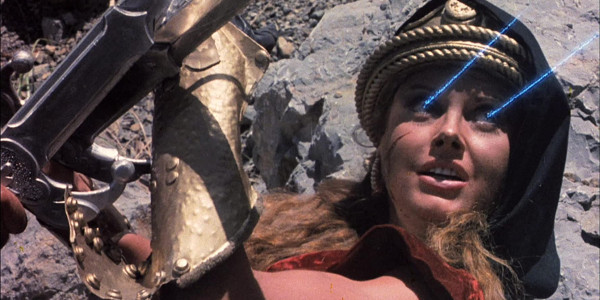 This was the first screenplay by Thomas McKelvey Cleaver, who went on to write several other post-apocalyptic movies that were also directed by Cirio H. Santiago. For a freshman effort, it has a surprisingly strong story with two well-balanced plots, as we see Marya struggle with her desire for revenge while wanting to hold true to the ideals of the group offering her a better life. At the same time, we see Mikal seeking some kind of redemption as he seeks a better way of living and some semblance of honor among fighting men who have none.

While Wagner and Johnson do a fair job of playing these characters, it isn’t enough to salvage the rest of the movie. Santiago was one of the fathers of Blaxploitation and it shows through the film’s poor production values, terrible sound-editing, cheesy synth-heavy soundtrack and horrendous cinematography.  This movie somehow manages to obscure the characters in shadow in the middle of the day. The movie is also oddly inconsistent in its costuming, even by the standards of post-apocalyptic movies. As per usual, the Sisterhood are in skimpy mini-skirts and belly-baring tops with metal helmets while Maryna is running around in a sensible and surprisingly clean shirt, jeans and a cloak, like that one friend putting in the bare minimum of effort to “dress up” at a Renaissance festival.

In the end, The Sisterhood is an oddly conflicted film on multiple levels. On the one hand, it’s your typical post-apocalyptic movie which uses a “girl power” concept as an excuse to indulge the filmmakers’ fetish for scantily-clad women wielding weapons. On the other hand, it is nowhere near as sleazy or filled with gratuitous fan service as this sort of movie usually is and the writing and lead performances are shockingly good. Unfortunately, the whole thing balances out as largely boring and isn’t even worth watching to make fun of. MSTies may take it as a challenge to riff this, but they’ll likely have trouble staying awake long enough to think of good quips.

The Sisterhood is currently streamable on Amazon Prime.