Stream This? is a feature devoted to exploring and reviewing some of the lesser known and often-times weirder films that can be found on various streaming services. Today, Matt Morrison examines the 1987 action/comedy Deathstalker 2.

In 1987, there came a movie that became an instant classic, beloved for how it hilariously parodied all the usual tropes and cliches of fairy tales and fantasy films while still telling a good story in its own right. That movie was The Princess Bride. But that same year also saw the release of a movie that, while not as well-known or highly regarded, was just as successful when it came to satirizing sword-and-sorcery – Deathstalker 2. 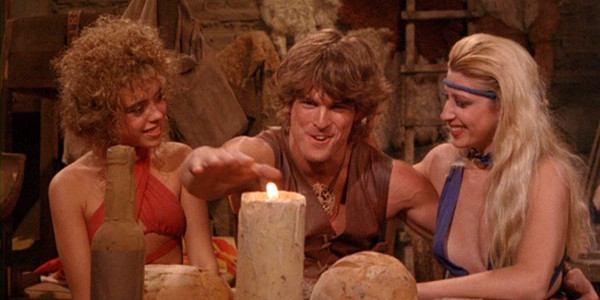 The movie opens with the famous Prince of Thieves Deathstalker (John Terlesky) stealing a jewel from the manor house of Sultana (Toni Naples) and we immediately learn what kind of movie this is going to be, as Deathstalker pulls a Han Solo charging into a room full of guards and then immediately charges back out with the guards in hot pursuit.  Any doubts that this movie is not going to be at all serious are vanquished the moment an angry Sultana watches Deathstalker ride off into the night and declares “I’ll have my revenge and Deathstalker too!” Cue the title card and the repetitive theme song that we will hear over and over, until even the actors complain about the bard that is playing for them not knowing another tune. 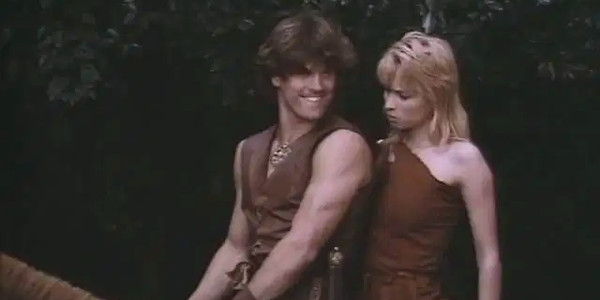 In short order, Deathstalker falls in with Evie The Seer (Monique Gabrielle)  who tells him of a neighboring kingdom where the princess has been replaced with an evil twin by the evil sorcerer Jarek (John LaZar). She leaves out the little detail that she’s the princess in question and hilarity ensues as they run into various perils and dangers on the road to her palace. These include a gang of ruthless mercenaries, a cemetery full of zombies and a tribe of amazons determined to put Deathstalker on trial for crimes against womankind.

This sort of absurdity is par for the course for director Jim Wynorski, who is famed for making movies full of gorgeous, scantily-clad women, that don’t take themselves or their genres at all seriously. A glance at Wynorski’s IMDB page reveals a list of films that are evenly split between soft core porn parodies (ala The Devil Wears Nada, The Bare Wench Project) and the sorts of science-fiction movies that go directly to the SyFy Channel. (i.e. Cobragator, Piranhaconda). In other words, this isn’t the sort of movie you go into expecting the grandeur of a Basil Poledouris score or Duke Callaghan’s cinematography. This is the sort of movie where you expect a cameo by professional wrestler Queen Kong as the Amazon champion, whom Deathstalker is forced to face in a fight to the death. In a modern wrestling ring. With a card girl. Because why not? 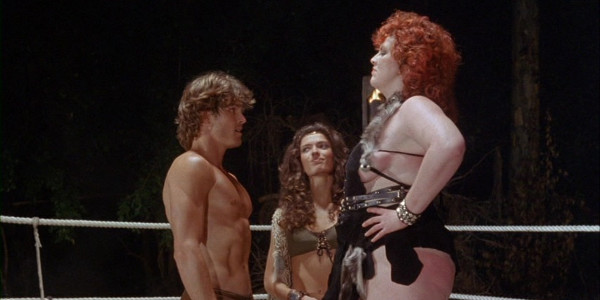 The damnable thing is that Deathstalker 2 works precisely because it doesn’t try to pretend it’s anything other than a funny fantasy flick based around a simple concept: what if Bugs Bunny were a human stuck in a Conan story? This conceit was apparently contrived by Wynorski and Terlesky upon arriving in Argentina and discovering that the studio lot they were meant to film in was full of more trash and tire fires than the garbage dump next door and their other neighbor was an airport that made shooting outdoors during the day all but impossible.

With the script they were given unfilmable with the resources they had and two weeks to get a movie made, they elected to improvise a new movie catering to the strengths of the actors they had, many of whom didn’t speak English. The final sword fight between Deathstalker and Jarek, for instance, took full advantage of the fact that both LaZar and Terlesky had extensive stage combat training and actually knew how to fence. This resulted in a surprisingly good final battle between the hero and the villain.

Deathstalker 2, while not quite good, is pretty damn spectacular considering what they had to work and truly funny when it means to be and that is no small thing. While the movie is available for streaming, I highly recommend tracking down the recent BluRay release. The commentary by Wynorski, Terlesky and Naples is as funny as the movie itself and quite informative even for those who don’t normally like commentaries.