2020 has been a bit of a dumpster for most of us. And yet it’s been a very good year for John Constantine. He’s back on TV, played by Matt Ryan, as part of the cast of Legends of Tomorrow. He also somehow wound up front-and-center in the Justice League movie that closed out the DC Animated Universe. Again, played by Matt Ryan.

Old Conjob’s also got a solo series again. An adult series as part of DC’s Black Label. Okay, yes, that series has been cancelled (which seems a good cue to once again remind you all to sign the petition to save John Constantine: Hellblazer) but since that series has been a breath of fresh air and a reminder of how great the old Hellblazer series was, we’re still counting it as a win. Because when you’re a Hellblazer fan, you treasure whatever small victories you can get.

That brings us to this week’s latest offering; Hellblazer: Rise And Fall #1. Written by Tom Taylor of Injustice: Gods Among Us fame. The modern master of dark comedy with a heart. Art by Darick Robertson. The artist behind such modern classics as The Boys and Transmetropolitan, famed for his own gifts for depicting the darkly comedic and comically dark. Could this little book possibly be as good as you’d expect given that pedigree? 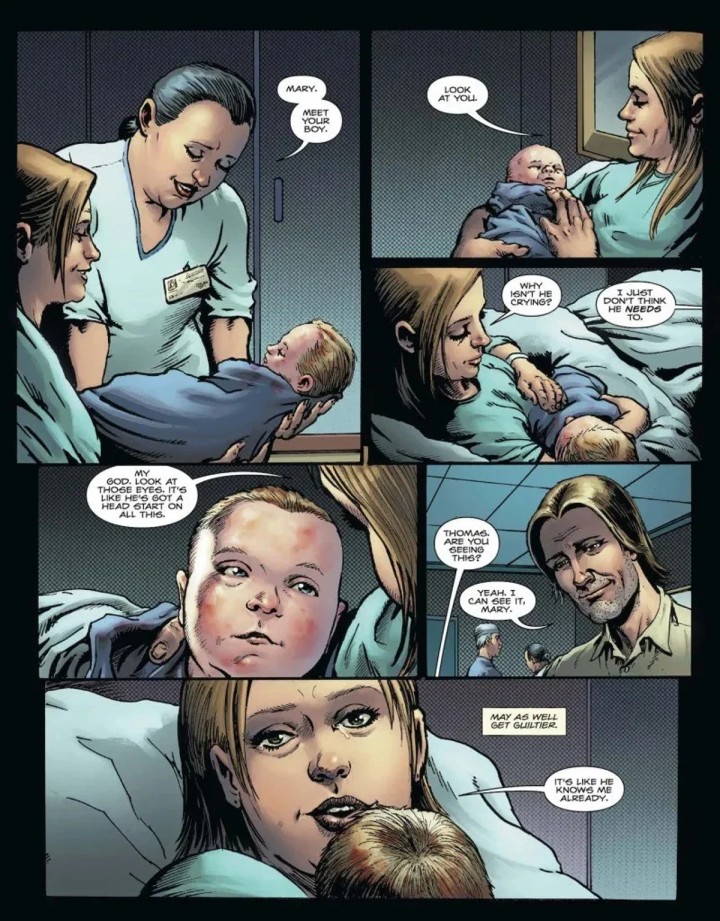 Set in the early days of John Constantine’s career, Rise and Fall opens with flashbacks to John’s portentous birth and his first botched attempt at doing magic. This serves as a brilliant introduction to Constantine’s character for newcomers. It also reintroduces the curse to lose those closest to him that dominated Constantine’s life, which has been absent from many of his more recent appearances in the comics. This, along with a few knowing nods to several classic Hellblazer creators in the script and art, show that Taylor and Robertson are aware of the legacy they are upholding and remain committed to honoring that history. (The doctor delivering John, for instance, is named Dr. Delano in honor of Jamie Delano and one scene is set in a bar called The Dillon after Steve Dillon.)

The plot, once things get started, is a classic Hellblazer mystery. Naked rich jerks are falling from the skies over Liverpool and for some reason they all have wings attached to their backs. It’s a Rapture in reverse and Detective Aisha Bukhari is at a loss for an explanation. Unluckily, her childhood friend John Constantine shows up with one; one involving their first failed attempt at working a spell and what the sins of youth have awoken.

Words fail me in describing how the creative team have created something that is so quintessentially Constantine yet uniquely their own at the same time. Tom Taylor is in fine form, writing a John Constantine that is likable and cracks–wise while still being a seemingly unrepentant bastard on the surface. The inner monologues speak to John’s conflict, however, not that he’d ever admit to having inner conflicts.

Robertson proves equally able, offering up cathartic images of both horror and humor in his distinctive fashion. There are parts of this comic, silent and conveyed entirely through the action, that will make you laugh and then immediately feel guilty for doing so. Such is the dark magic of Robertson’s imagery.  The color art by Diego Rodriguez shifts appropriately from scene to scene, always catching the eye and drawing it where it should go. The lettering by Deron Bennett is also top notch, with the balloons carefully placed so as not to obscure the art one bit.

One thought on “HELLBLAZER: RISE AND FALL #1 [Review]”