James Bond will return, but Daniel Craig is leaving 007 behind with the franchise’s latest entry, No Time To Die. It’s been six years since Craig’s prior entry, Spectre (2015), which is the longest gap between Bond movies since Pierce Brosnan’s Goldeneye (1995) followed up Timothy Dalton’s License to Kill (1989). And back then it was only the franchise that was in need of reviving, not the whole damn theatrical business model! No Time To Die does seem poised to help in that regard, however, and it’s certainly a movie that deserves to be seen on the big screen and with as large an audience as possible (or as are comfortable being around).

No Time To Die begins its tale not long after the events of Spectre, with Bond (Craig) enjoying a peaceful vacation with Madeleine Swann (Léa Seydoux). Of course, things don’t stay peaceful for long because this is a story about James Bond, and he’s soon juggling assassination attempts from Spectre and a global threat from Rami Malek’s Lyutsifer Safin. Bond is helped along the way by a new 00 agent, Nomi (Lashana Lynch), as well as CIA agents Felix (Jeffrey Wright) and Paloma (Ana de Armas). No Time To Die also brings back his MI6 supporting cast of M (Ralph Fiennes), Q (Ben Whishaw), and Moneypenny (Naomie Harris). The movie even manages to squeeze in Christoph Waltz’s Blofield because this one really is all about giving Craig’s Bond a big sendoff.

As a farewell to Craig’s James Bond, No Time To Die is very good, but it falls short of being a really great Bond movie. It starts out strong, with an excellent car chase in Italy and later a brilliant sequence in Cuba. Director Cary Joji Fukunaga does a masterful job with the big action, but it’s the sweeping scenery of the film’s many gorgeous locales that really elevate the look of the film. Even a concrete WWII base looks amazing thanks to cinematographer Linus Sandgren’s camera work. No Time To Die’s runtime is 2-hour, 43-minute, but it never feels overly drawn out and the pace moves along with each new twist. Once No Time To Die begins getting in deep with Safin’s plan, though, things do become a bit muddled. And for all the build-up to Spectre in previous films, it’s little more than an afterthought here. There are still some excellent moments, like a terrific sequence in the foggy woods of Norway or an impressive single take of Bond absolutely destroying henchmen, but Safin’s convoluted plan saps some of the fun from the third act.

Seydoux’s Swann is still a bland love interest for Bond, and the chemistry between Craig and her never reaches that of Craig and Eva Green’s Vesper. No Time To Die even tries putting to rest the torch Bond has carried for Vesper since Casino Royale, but it only ends up reminding audiences of that more engaging relationship. Swann’s backstory, with its ties to the Spectre organization and ultimately Safin, does get fleshed out further in this movie and it makes for a very tense pre-credits opening.

This opening is also the setup for Safin, and while he’s truly menacing in the opening minutes, he becomes more predictable and one-note as the movie goes on. For all Malek’s efforts, he is a forgettable Bond villain, but he isn’t the only one the movies wastes. Blofield appears in what can only be described as a glorified cameo. It’s a shame, too, because while Spectre wasn’t any good, Waltz is always a delight, and he is again in the one scene he shares with Craig’s Bond. Still, it’s a shame that his turn as arguably Bond’s most infamous villain won’t end up being nearly as well remembered as say Mads Mikkelsen’s Le Chiffre or Javier Bardem’s Raoul Silva.

Though there are missteps, the highlights of No Time To Die will largely outshine them. Among the best bits of the movie are the women characters, and for a film series so entrenched in sexism, any improvement here is most welcome. Phoebe Waller-Bridge was brought in to punch up the screenplay by Neal Purvis, Robert Wade, and Fukunaga, and so we have to assume we have her to thank for this. Swann may still be lackluster, but she benefits from a second movie’s worth of development. Lynch’s new 00 agent is a lot of fun, especially when sparring with Bond. Captain Marvel already showed how commanding Lynch can be, but No Time To Die demonstrates how great she could be as the star of her own action movie, or dare I say, franchise.

The biggest standout, however, is Ana de Armas’ Paloma. It’s not too surprising to see her have crackling chemistry with Craig since they worked together before in the excellent Knives Out, and their all too brief scenes together are the best of the movie. De Armas is, like Waltz, only around for what’s basically a cameo that could arguably have been cut to shave off some of the runtime, but she’s so good it’s completely understandable why her scenes remained. Honestly, No Time To Die‘s biggest crime is not making her Bond’s screen partner for the whole thing. 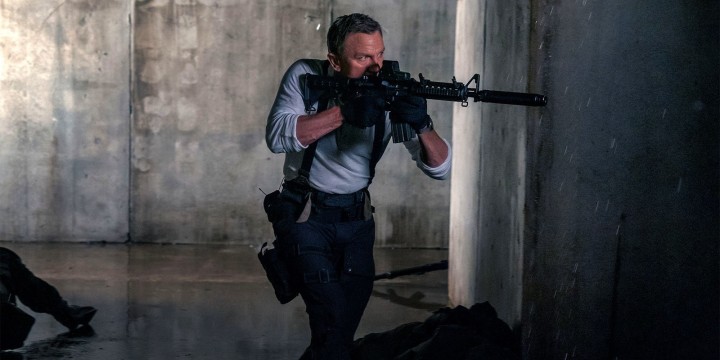 No Time To Die is Craig’s film through and through, and his performance is the best he’s ever given as Bond. It’s obvious he really wanted to go out on a high note, and as that’s pretty rare within the franchise, it’s safe to say he succeeds. There’s so much emotion in his performance as Bond works through betrayal, heartbreak, and even finds a glimmer of happiness. Craig has some really funny quips as Bond, too, which speaks to how comfortable he is in his last hurrah.

How No Time To Die ends is sure to a big talking point going forward. It’s a bold choice, but one the movie absolutely earns by how it builds off the Craig era films. This Bond has been the most complex version of the character yet, and he’s really grown and evolved across these five films. It’s fitting, then, that Craig’s final outing brings a sense of closure to his time as 007. James Bond will return, the final card of the movie’s credits assures that, but No Time To Die is a near perfect farewell to the best actor to have ever played him.