When The Amazing Spider-Man released in 2012 it was a solid start for the new superhero franchise, but it suffered by choosing to again rehash Spider-Man’s origin which kept the film firmly in the shadow of the previous trilogy. The Amazing Spider-Man 2 doesn’t suffer this same comparison. Director Marc Webb presents a different enough narrative where Spider-Man is settled in his new life, struggling but often managing to juggle his personal relationships with superhero duties.

In many ways the sequel is an improvement on its predecessor and is a stronger entry in an ever-growing field of superhero movies. There really is a lot to enjoy about The Amazing Spider-Man 2, however, it also has problems that can’t be overlooked which detract from the film overall.

Let’s start with the good, as the film itself actually takes this same approach. The first act reintroduces us to Peter (Andrew Garfield), his girlfriend Gwen (Emma Stone), his Aunt May (Sally Fields), and how Peter has been spending much of his time–crackin’ wise and stopping crime.

The opening action set piece of Spidey swinging through Manhattan on his way to stop a robbery by Aleksei Sytsevich (a sadly underused Paul Giamatti) can only be described in one word: joyful. This is by far the best Spider-Man has ever looked on screen doing things only a spider can. The whole sequence is beautifully shot, flipping seamlessly between angles that make it look like Spidey’s wearing a GoPro camera to more traditional tracking shots. Having not seem TASM 2 in IMAX 3D I cannot speak to how it looks in that format, but even in boring 2D in an old school cinema this film’s action sequences are thrilling. Spider-Man in motion is impeccably rendered in CGI with incredible attention to detail. At one point you can even see and hear Spider-Man’s suit ruffling in the wind and it’s little touches like this that ground the spectacle.

At the heart of TASM 2 is the relationship between Peter and Gwen. Peter is still grappling with his guilt over her father’s death and the promise he made to leave her alone. That, coupled with the fact the two are traveling along separate paths – Gwen’s looking at future at Oxford, while Peter is, y’know, Spider-Man – causes a rift in their relationship. Yet while they break up, the two can’t be kept apart and what follows is a charming romance filled with ‘will they, won’t they’ moments and more chemistry between Garfield and Stone than any onscreen pair in a superhero film before. Where young romance so often comes across as stilted and forced, the love story of Peter and Gwen is genuine and therefor a real enjoyable element of this franchise.

As equally enjoyable, though for different reasons, is Peter’s relationship with his Aunt May. Her time on screen may be minor, but any comic book fan knows how large Aunt May looms in Spider-Man’s legend. Sally Field – herself a screen legend – delivers a powerful performance that adds a lot to the film’s emotional core.

We’re also introduced to Oscorp employee Max Dillon (Jamie Foxx). A put upon, easily ignored outcast, Dillon lacks the social skills necessary to connect with those around him. When he’s an innocent bystander saved by Spider-Man, the web-slinger’s easy rapport and cheerful attitude has a HUGE impact on him. This chance meeting turns Dillon into a massive Spider-Man fan, but the importance he places on this fabricated friendship is harmful.

The movie’s marketing made no secret of the fact Dillon – through an accident involving advanced, experimental electric eels – is transformed into a blue, glowing battery of energy, dubbed Electro, and eventually becomes the film’s primary villain. Electro has an interesting and truly dangerous power set (and apparently the ability to control dubstep in addition to electricity). Foxx does all he can to give Electro some humanity through the heavy visual effects, but after the initial showdown any attempt at making him a tragic figure, wronged by society is lost for the easier route of another vengeful villain out to get Spider-Man.

It’s here TASM 2 loses almost all its momentum and begins meandering through too many threads, not giving any the attention needed to keep the audience invested. It’s so sudden you can practically hear the air being let out as the film begins to deflate. And with sloppy direction, editing, and some truly cornball moments of dialogue, what began so charming soon devolves into campy, overblown schlock. 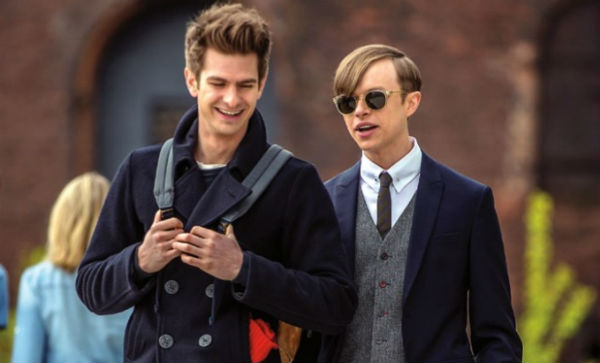 During its middle act Harry Osborn (Dane DeHaan) is introduced, but the development of his and Peter’s friendship is extremely weak. Even master class actors would have struggled to give this relationship the pathos needed to have the audience care, and it just never clicks between Garfield and DeHaan.The rushed development of Harry is big problem, and one that could have been easily avoided if this film didn’t take him all the way to the Green Goblin so quickly. Not only that, but the introduction of an Osborn hereditary disease being part of his bodily transformation into the Green Goblin and a terrible overall design for the character aren’t welcome additions at all. Plus, this unecessary storyline is forced into TASM 2 obviously for the sake of setting up future installments, but it comes at the expense of never fully developing Electro into what could have been an interesting and, to a point, sympathetic villain.

Adding to an already overstuffed plot, there’s more to uncover about the death of Peter’s parents and his father’s research at Oscorp. TASM 2 dedicates a significant chunk of its middle act to this, only to later move on without any closure in order to get back to more pressing matters: reconciling with Gwen and stopping Electro.

As for the film’s climactic moment, an event comic book fans have been expecting since day one, the crucial moment is handled well but without any real suspense. Even those unfamiliar with Gwen’s fate will see the writing on the wall as the film only repeatedly reminds us how at risk those close to Spider-Man are. Once it happens, though, Garfield gives a heart-wrenching performance that does the infamous scene justice.

In summation, TASM 2 gets some things right. Garfield’s Spider-Man is snappy, Peter is lovably goofy, and his relationship with Gwen is sweet. The action set pieces look fantastic and really sell this comic book world coming to life before your eyes. Where TASM 2 stumbles is with the poor development of its villains, conflicts, and by feeling beholden to establishing further installments at the expense of giving this film a stronger, self-contained narrative.

One thought on “Movie Review: THE AMAZING SPIDER-MAN 2”