The Editor’s Notes is an opinion column allowing our writers to express their honest feelings about comic books, the comic book industry, and all that it inspires. The views expressed within belong solely to their author.

[WARNING – This post contains SPOILERS for Guardians of the Galaxy]

Earlier this week I attended a screening of Marvel’s Guardians of the Galaxy and had an absolute blast. Plenty of early reviews are calling Guardians the most fun Marvel movie since The Avengers and they aren’t wrong. It has a quick pace, quirky characters, more comedy than I’m guessing anyone expected, and fully delivers on the promise of an ‘out of this world’ action spectacle.

As a Marvel property, I knew the least about Guardians of the Galaxy before attending my screening, but I was optimistic the film would be a fun ride based off of its brilliant trailers and word of mouth. Thinking back on the film’s marketing, I was given the impression one of the film’s subplots would be a romantic relationship between Chris Pratt’s Peter Quill/Star-Lord and Zoe Saldana’s Gamora.

And every time I saw that one shot from the trailer where the two are leaning in close, I’d roll my eyes and think, “How typical!” But seeing as this trope is present in just about every action/adventure film – and in particular superhero movies – I wasn’t going to let it detract from my enjoyment.

However, I can thankfully report Guardians doesn’t fall for the cliché of having our male lead become romantically entangled with the only available female. Not to say there aren’t a handful of sparks between them or that a romantic relationship couldn’t develop later, but Guardians chooses to focus more so on the friendships forming between each member of the Guardians. Hell! “Friendship is Magic” (à la My Little Pony) might as well have been the tagline for Guardians of the Galaxy!

So that was a pleasant surprise, and one I hope more films will take note of: the film’s hero – whether male or female – doesn’t require a romantic subplot and isn’t any less appealing or relatable without one. However, there was something that struck me about Gamora while watching Guardians and it’s brought an upsetting trend about cinema’s superheroines to my attention.

All of the Guardians are ne’er-do-wells who are united by a common cause and later friendship to become heroes and thwart evil on a galactic scale. They’re all criminals, though Gamora has easily the worst reputation out the bunch seeing as she’s best known as one of Thanos’ adopted daughters and prized assassins. In the case of Guardians, Gamora beginning as a bad guy who chooses to act as a good guy isn’t out of the ordinary, but it’s a character arc that every notable cinematic superheroine has had.

The most obvious example of this ‘villainous woman who later becomes a hero’ is Marvel’s only other major cinematic superheroine, Black Widow. You can hear it now, right? Scarlet Johansson uttering the line, “I’ve got red in my ledger, I’d like to wipe it out,” in The Avengers. And then there’s Anne Hathaway’s Catwoman in The Dark Knight Rises, whose sole motivation is to secure a thumb drive with a clean slate program that would allow her to wipe out her nefarious past. Even Mystique of Fox’s X-Men franchise is a dubious hero at best; shown to be a downright villain when portrayed by Rebecca Romijn and morally grey when played by Jennifer Lawrence.

So why is it that superhero movies can’t deliver a female hero who is a hero from the very start? Sure, there are a handful of exceptions – Storm, Rogue, Kitty Pryde, Sue Storm, Maria Hill – but these characters aren’t on the same level of exposure as those above.

It’s a sad trend that the most prolific superheroines in our biggest blockbuster are all women from villainous roots who choose to become heroes in order to finally do some good. What kind of a message is that sending? Are women incapable of acting altruistic simply for the sake of it? Do women need to fuck up a few times before choosing the path of the righteous? Are men the only ones who can become heroes solely from a desire to help others?

I’m just spit-balling here, but I believe this is a leftover story device from the tale of Adam and Eve, wherein it’s Eve who falls to Satan’s temptation, eventually bringing Adam down with her. Women characters are very often placed in the role of temptress for that very reason, because it was a woman who brought the downfall of man, forcing God to expel humanity from paradise. And it’s only a slight variation of that trope we’re seeing in today’s superhero movies, where our female heroes start out on the wrong side of the law.

And in fact, continuing this line of exploration, one could argue that the ‘villainous woman who later becomes a hero’ is only another variation of the ‘damsel in distress.’ In these cases, the woman needs a male hero to show them the way: Black Widow was saved by Hawkeye, Catwoman by Batman, Gamora by Star-Lord, and Mystique, well… she’s basically a pawn between Professor Xavier and Magneto, with both men pushing and pulling her whichever direction they please.

It’s disheartening to realize that upon further examination the few, high-profile women heroes in today’s superhero blockbusters are all reformed baddies. And sadly, it only makes sense seeing as each of these characters are only supporting players in a larger story. This poor representation of the superheroines only highlights how badly a film in where a woman plays the leading hero is so desperately needed.

And while a Black Widow movie is the most logical choice at the moment, it does nothing for showcasing a superheroine whose origin doesn’t have her begin as a villain. What’s most irritating about all this is that it isn’t as if movie studios are without options. The number one superheroine who’s a model hero yet doesn’t have her own movie? Wonder Woman. She’s appearing in Batman VS Superman: Dawn of Justice and will be played by Gal Gadot, but judging from the fact her name wasn’t even included in that godawful, mouthful of a title I’m not getting my hopes too high.

How about Jaimie Alexander’s Sif? The only female Asgardian besides Thor’s momma, Frigga, Sif was a scene stealer in both Thor and Thor: The Dark World. Even better, how about a Sif-Valkyrie team up where Thor, The Warriors Three and the rest of the Asgardians are the supporting players? How about bring in Misty Knight and just go for the Fearless Defenders? Admittedly, a lot of Marvel superheroines are in some way linked to a male hero. She-Hulk and Wasp for instance, but they’re still great candidates considering their male counterparts are already (or soon will be) established within the Marvel Cinematic Universe.

But were I to argue for one character so deserving of her own film I’m beside myself that Marvel didn’t even whisper her name at this year’s San Diego Comic-Con, its Captain Marvel A.K.A. Carol Danvers A.K.A. a character who would meld seamlessly into the already established MCU. 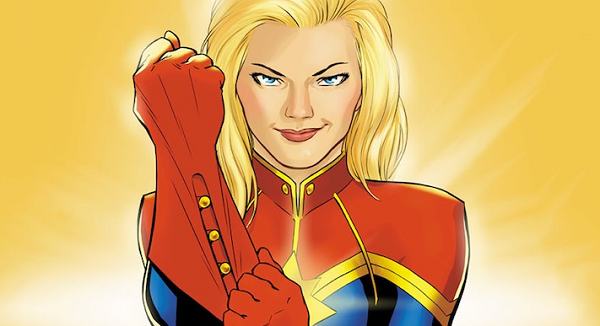 In The Avengers, audiences were introduced to the cosmic threats to Earth, and in Guardians of the Galaxy that cosmic environment was further explored. What’s stopping them from next introducing a hero whose powers come from an alien source?

And speaking of those powers, Captain Marvel’s are unmatched! She can fly, shoot energy beams, and pack one hell of a punch. On top of that, before becoming super-powered, Carol was an ace Air Force pilot which means she has training out the wazoo. This is a woman who could easily rival Iron Man, Thor, and Captain America. Plus! Her new costume is the bomb and would translate really well to the big screen. No more swimsuit, sash, and thigh high boots, thank you very much.

Currently, Marvel has something like half a dozen movies scheduled for release over the next few years and it isn’t looking like a single one of them will star a superheroine. But when we do get female hero in the lead role – and I’m positive we will, I’m not that jaded (yet) – she will very likely have begun her journey as villain who was later shown the light by a male superhero, of this I’m sure. Though how I wish I’ll be proven wrong.

2 thoughts on “The Editor’s Notes: Cinematic Superheroines & The Curse of Eve”