The Doctor is the last of the Time Lords of Gallifrey, who were once tasked with monitoring the whole of time and space. A renegade among his people, The Doctor took it upon himself to become a champion of the oppressed, who continually defied the Time Lords’ rules on non-interference in the name of helping those in need. Continually reborn into a number of different incarnations, The Doctor can be young or old, silly or serious, strange or stoic. The only constant is that he is never cowardly or cruel, never gives in and never gives up.

After a thousand years of war on the distant planet of Trenzalore, The Doctor recently regenerated into his twelfth incarnation.  His current traveling companion – school-teacher Clara Oswald – is still having difficulty reconciling this new Doctor with the man she knew before.  Despite Clara having met all of the Doctor’s earlier selves in her travels, she’s still adjusting to the idea that the goofy, geeky, ever-smiling man-child she knew as The Doctor is now an older, harsher, ruder and much more sarcastic man.  Still, change is the one constant, as The Doctor and Clara’s latest journey seems to be proving.

Clara had it in mind to learn how to ski, so that she wouldn’t look like a complete fool chaperoning a school trip to a ski resort. The fact that a certain Mr. Danny Pink was also chaperoning this trip may have a slight role in this decision to join the trip and her desire not to look foolish. Still, The Doctor is nothing if not obliging and is ready and able to take Clara on a ski-trip to Isen VII – a planet that boasts the softest and safest ski-slopes in the galaxy.

Well, it’s safe apart from all the hostile fauna, but The Doctor can detect them long before they’ll be close enough to be a danger. Probably. 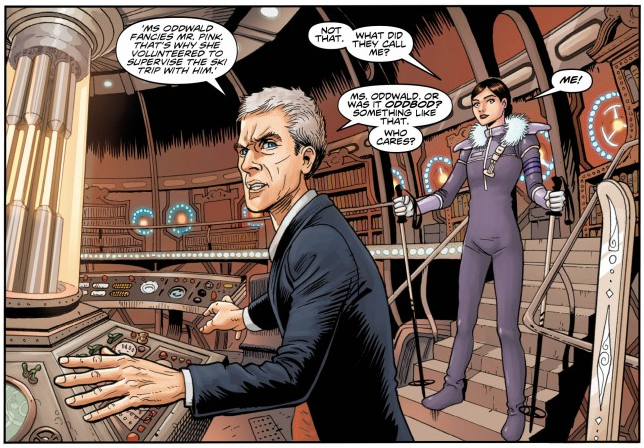 To The Doctor’s astonishment (but not Clara’s) they exit the TARDIS to find a tropical jungle rather than a world dominated by icy mountains. A quick examination of the local trees reveals some obvious signs of outside interference, and if there’s one thing The Doctor can’t stand it is outside interference. Clara would probably suggest this is because he can’t stand the competition. Regardless, something strange has happened to the natural environment of Isen VII and The Doctor is determined to find out what.

This first chapter of Terrorformer proves a most promising start for the new Doctor Who: The Twelfth Doctor series. Written by 2000 AD mainstay Robbie Morrison, the script boasts a similar aesthetic to that famous sci-fi weekly comic while still being firmly set in the world of the Doctor Who television series. The story boasts a theme that is common to stories from the oeuvre of both franchises – environmentalism versus corporatism.

Gripping, culturally-relevant stories aside, the true triumph of this series lies in the characterization. Morrison has perfectly captured the humor of Peter Capaldi’s take on The Doctor and the character’s obliviousness in the face of his own hypocrisy. One minute he complains about Clara’s vanity and humanity’s concern with appearances in general. The next minute, he’s criticizing his previous incarnation’s lack of fashion sense while smugly noting his own sense of “sophistication and timeless sartorial elegance.”

Clara Oswald, as portrayed by Jenna Coleman, is also written true to form here. As in Series 8, Clara has shed the winsomeness that dominated her earlier portrayals and is presented here as a quick-witted young lady who can give as good as she gets from the sharp-tongued Doctor. 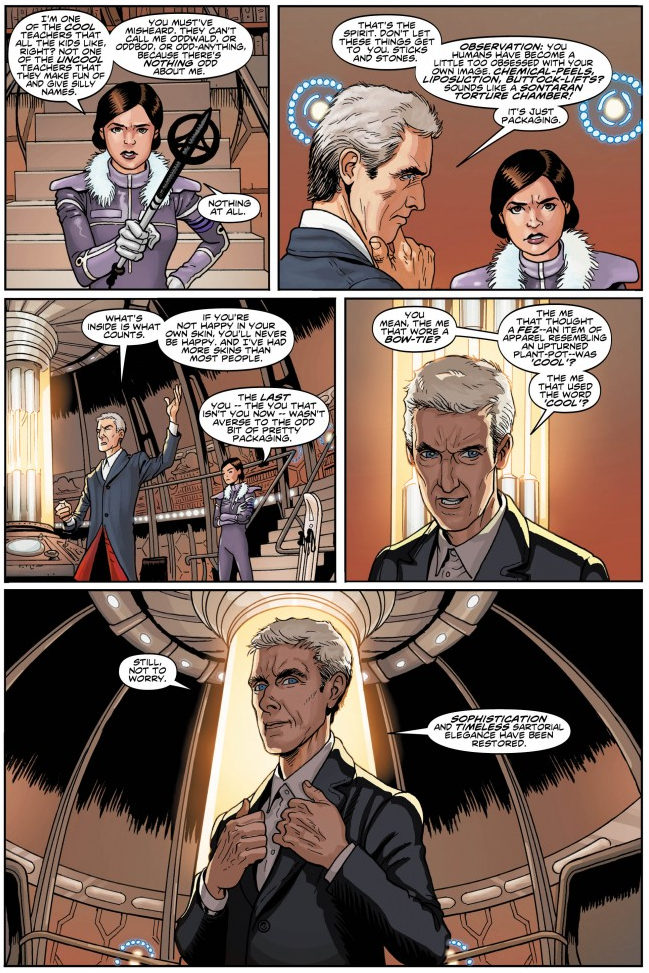 The artwork by Dave Taylor and Hi-Fi provides additional hope for the future of this title.  Taylor is a competent caricaturist, capable of capturing the likenesses of our two heroes quite well. This is rather essential in any comic book based on an established property and it is a problem that has plagued many Doctor Who series in the past. Thankfully, Taylor is a fine storyteller as well as a caricaturist and he draws a thrilling action sequence as well as he depicts Capladi’s famous eyebrows.

The only real weakness to this issue is the same problem that most TV tie-in comics possess. While fans of the current Doctor Who series will love this book, it does little to open itself up to comic readers who might discover the show through this book. The book isn’t entirely inaccessible to new readers, but Whovians will get far more out of it than non-fans.

Doctor Who: The Twelfth Doctor #1 arrives in stores on Wednesday, October 15th.