She wasn’t like the other girls in her village, being more disposed toward fighting and hunting with her brothers than studying the arts of hearth and home. She was strong and she became stronger still when her family was killed by bandits, leaving her all alone but hardly helpless. Many are the legends that are told about her, speaking of a beauty that was the equal of her fury in combat. She is Red Sonja!

He was marked as different by the elders of his village at an early age, having been literally born on the battlefield. Unlike most of his fellow Cimmerians, he was given to wondering about the world beyond. Inspired by the tales of his outlander grandfather, he would leave his harsh homeland to become a thief, a reaver and a slayer. And one day, he would become a king by his own hand. He is Conan!

Some say they were chosen by their respective gods to be their champions. Some call them heroes. Others call them menaces. But all agree they made their mark upon The Hyborian Age. But what will happen when The She-Devil of Hyrkania crosses paths with the future King of Aquilonia? 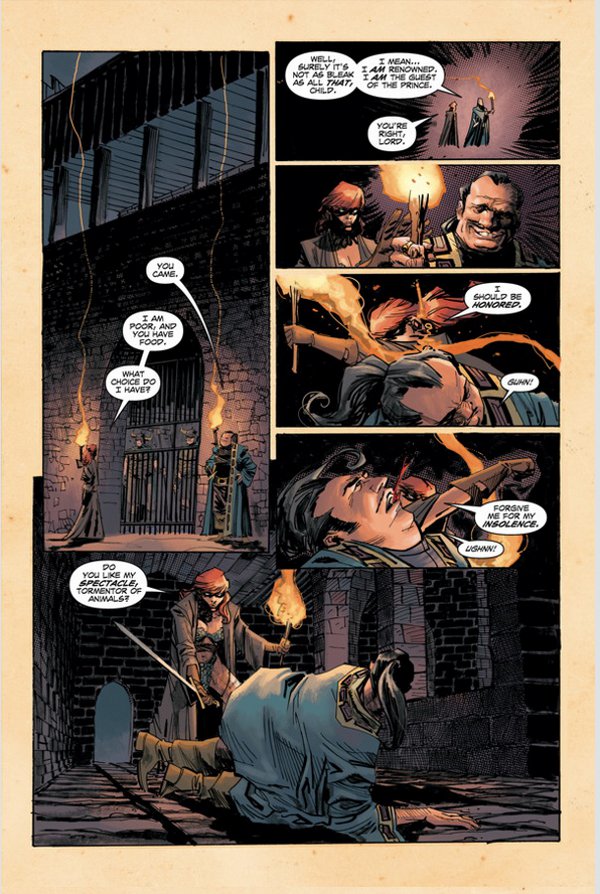 It has been several decades since Conan and Red Sonja crossed paths.  The original Conan the Barbarian comics of the 1970’s were one of Marvel Comics greatest successes in the years following the first reformation of the Comics Code Authority. The new rules allowed more latitude for the portrayal of monsters and violence, paving the way for a renaissance of fantasy titles.

Red Sonja was born of this wave of popularity, loosely based upon the character of Red Sonya of Rogatino from one of Conan creator Robert E. Howard’s historical novels, The Shadow of the Vulture. Conan adapter Roy Thomas wanted a female foil for Conan who would not be hampered by the official history of Howard’s canon Conan tales, as well as a character who could satisfy the demand for more comics featuring female protagonists. Sonja filled both roles admirably and soon became as popular as Cimmeria’s favorite son.

Ironically, both characters – and fantasy comics in general – would fall out of favor in “The Dark Age of Comics.” It would not be until after the turn of the century that both Conan and Red Sonja would be revitalized and rediscovered by a new generation of comic readers. Conan found new life at Dark Horse Comics while Sonja was brought to prominence at Dynamite Entertainment.

However, knowledge of this history and legacy is not essential to one’s enjoyment of Conan/Red Sonja #1. The story by Gail Simone and Jim Zub is easily accessible to new readers and is set outside the current continuity of the monthly Conan and Red Sonja comics.  Long-time fans of the characters will be well pleased by this tale, which centers upon a young Conan and Sonja vying for the same prize.

The story features a strong mixture of humor and action, but this should be no surprise given the writers involved!  Both Simone and Zub have a long history of fantastic works that balance high adventure with dark comedy and this comic is as hilarious as it is thrilling.

The artwork is equally amazing. Dan Panosian is to be commended for his character designs, which portray Conan as more wolfish than muscle-bound and Sonja as being beautiful but fit in the manner of a female athlete rather than a swimsuit model. And colorist Dave Stewart affects a sepia-tone with his colors, evoking the aura of a historical epic throughout.

If this is your first visit to the world of Hyboria, prepare yourself for a surprising treat. And if this isn’t your first time to ride with Conan or Red Sonja, be ready to recall the days of high adventure as never before. This is a great comic that will please sword-and-sorcery genre enthusiasts and newcomers alike.