This week saw the release of Marvel’s Star Wars #1, a comic we here at Kabooooom have been very excited to read. (Okay, to be fair, it’s mostly me.) And happily, Star Wars #1 does not disappoint.

Writer Jason Aaron has done a fantastic job capturing the voices of these immensely popular and familiar characters. So much so it’s almost impossible not to hear the actors’ voices in your head while reading. John Cassaday’s artwork does well to capture their likenesses, though it occasionally suffers from being too on model and loses some expressiveness in the process. That being said, there are moments that look as if they were pulled straight from the screen (plus others you’ll wish had been), and that kind of synergy is vital for this comic book property.

With Laura Martin’s coloring – which is either vibrant or dingy, depending on what’s called for – and lettering from Chris Eliopoulos that does its best to replicate the sound of the Star Wars universe – no easy task, mind you – Star Wars #1 isn’t just good, it’s ridiculously good. This new chapter in the Star Wars saga has only barely begun and already it promises to be a doozy.

Yet, the best part of Marvel’s new line of Star Wars comics is the shift in focus away from the period of Episodes I-III and towards filling in the gaps of the original trilogy. The prequels have their flaws as well as their merits, and Star Wars: The Clone Wars was a tremendous series, but it’s high time our attention turned back to Luke, Leia, Han and everyone else we first met in a galaxy far, far away.

While reading Star Wars #1, it’s obvious the creative team feels the same way, and throughout the issue they’ve included allusions to the original trilogy. Now, chronologically this comic takes place right after Episode IV: A New Hope, but for readers Star Wars #1 is a comic releasing after a good chunk of what comes next has already been explored. With that in mind, a few of these references actually come from events our characters have yet to experience, but there’s no doubting we get the reference.

So let’s get to it! Here are eight original trilogy references found in Marvel’s Star Wars #1.

[WARNING- This list will contain SPOILERS for Star Wars #1 and Episodes IV-VI. ] 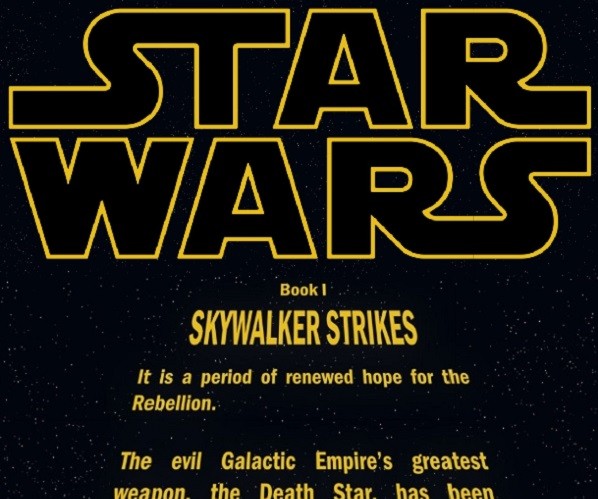 What’s Star Wars without its opening crawl? It just isn’t Star Wars, that’s what! Star Wars #1 opens in a way that invokes the franchise’s iconic crawling prologue even though the words don’t actually move or fade into the distance. Plus, its presentation forces readers to hear that triumphant John Williams’ fanfare while turning the page and that’s an awesome way to kick off the series.

2. Opening Shot: A large space ship enters the frame from above.

The opening shot of Episode IV: A New Hope has a Super Star Destroyer entering the frame from above and continue to move across the screen until it completely fills the frame, revealing the space ship’s absolutely massive size. Star Wars #1 begins in a similar fashion, and while this ship isn’t anywhere near as big as the Empire’s Star Destroyer, it’s obvious that its entrance into the panel from above is meant to mimic A New Hope‘s opening shot.

This is one of those references that is actually a call forward more than it is a callback. In Episode VI: Return of the Jedi, Han is held captive in carbonite freeze at Jabba’s Palace, but before Leia and Chewie can attempt their rescue, they need a spy. Enter Lando Calrissian – smoothest man in the galaxy – disguised as one of Jabba’s Palace guards. In Star Wars #1, Luke and Leia use the same subterfuge to accompany Han on a diplomatic mission, so now we know where Lando got the idea.

The line, “I have a bad feeling about this,” was first uttered by Luke in A New Hope as the Millenium Falcon approaches the Death Star. Since then, the line’s become something of a running gag, with some version of it appearing in every movie. In Star Wars #1, however, they tweak the line even more, having C-3PO say, “In short, I dare say I have a very GOOD feeling about this.” Oh Threepio, now you’ve done it.

5. The Falcon hides in garbage.

“She may not look like much, but she’s got it where it counts, kid,” Han famously says when Luke so rudely calls the Millenium Falcon a “hunk of junk.” But obviously, Han knows to use his ship’s rustic look to his advantage. In Episode V, the Falcon hides itself amongst the garbage that’s jettisoned from a Super Star Destroyer to avoid detection from the Empire, and in this issue Han employs a similar tactic. Later, the Falcon is also attacked by alien creatures, not so unlike what happens while inside that giant space slug in Episode V.

This phrase, like the famous opening crawl, is a requirement for any Star Wars story. Originally, “May the Force be with you,” was used by Jedi as a way of wishing someone good luck, specifically in the sense that the Force would look out for them. It didn’t take long, however, for the phrase to be adopted by the whole rebellion. Even Han says it before the Battle of Yavin, and you know he has no time for hokey religions. When it comes time for the phrase in Star Wars #1, it’s Threepio who gets the honor. And, in fact, it may be the first time he’s had the opportunity.

7. “These aren’t the droids you’re looking for.” 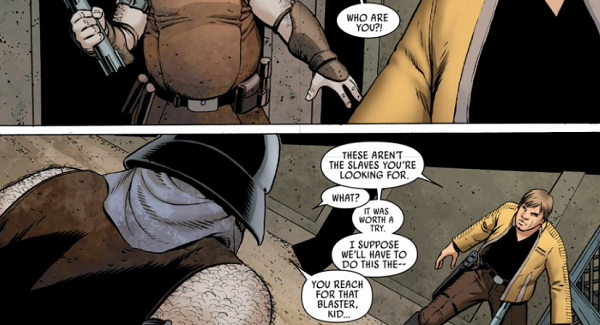 Another phrase that’s so often quoted and loved among fans is Obi-Wan’s sly handling of the Stormtroopers in Mos Eisley. With just a wave of his hand (and little Jedi mind trick) those Stormtroopers were sent about their business never the wiser they were just inches from the exact droids they were looking for. Clearly, Luke took note and in Star Wars #1 tries to pull of a little Jedi manipulation himself… but he’s not nearly as successful.

8. Obi-Wan speaks to Luke through the Force.

Only moments after being struck down by Darth Vader in A New Hope, Obi-Wan – well, Ben as Luke knows him – reaches out to Luke through the Force. Hearing the man he just saw get killed as a disembodied voice is a bit shocking to Luke, but seeing as it’s sound advice, he listens. In Star Wars #1, Obi-Wan comes to Luke’s aid again at the very end of the issue, saying, “Luke… listen to me carefully… RUN!”

There you have it, eight times Marvel’s Star Wars #1 makes a reference to something we’ve seen before in the original trilogy. Marvel’s new Star Wars ongoing is off to a great start, perfectly capturing the tone of the original trilogy and setting up a thrilling adventure we can’t wait to continue. Were there any other allusions to all things Star Wars we missed? Let us know in the comments below!