Recently, Disney has begun farming through its classic fairy tales for new, live-action remakes. Their first attempt was 2010’s Alice in Wonderland, and while it earned big at the box office, the film failed to win over critics or audiences. Their next revisionist twist on a classic fairy tale was last year’s Maleficent, which was sadly an even bigger failure, lacking the box office earnings of Alice and gaining even worse reviews.

After two misses, you have to hand it to Disney for their determination. The company has several more of these live-action remakes on the docket, including The Jungle Book, Pete’s Dragon, and an Alice in Wonderland sequel, Through the Looking Glass. And in all honesty, were it not for this latest live-action remake there would be no reason to look on those upcoming films with any hope.

Cinderella has stepped in at just right the moment and proves Disney hasn’t lost their signature touch of magic and whimsy. Under the eye of director Kenneth Branagh (Thor) from a screenplay by Chris Weitz (The Golden Compass), this quintessential fairy tale doesn’t undergo much, if any, of the revisions or modernization as Disney’s previous live-actions remakes. Rather, Cinderella tells almost exactly the same story as the 1950 animated version (with only minor flourishes), and it’s all the better for it.

All of the necessary and memorable beats are here: young Ella’s childhood is idyllic until tragedy takes away both her mother and father, leaving her in the care of her spiteful stepmother; quickly she’s reduced to nothing more than a servant for her new family; through it all she remains courageous and kind, her mother’s dying wish. After a chance meeting with a charming young man in the woods, Ella is inspired to dream of a better life, and when by royal decree a ball is held at the castle that any maiden in the land is invited to attend, she sees her chance. 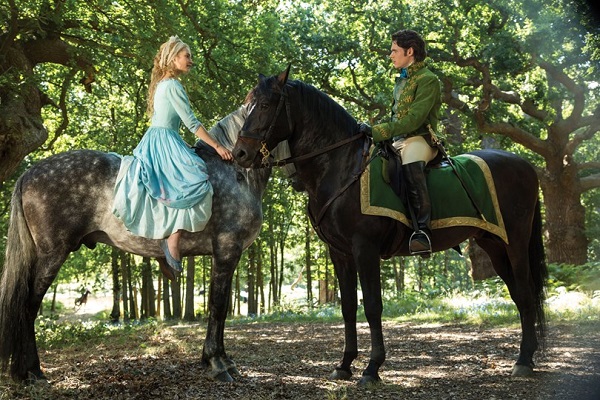 It’s those minor flourishes to the classic tale that update Cinderella just enough that it doesn’t losing its quaint, fairy tale quality. For instance, when Ella first meets her prince he doesn’t reveal his royal personage, choosing to instead claim to be an apprentice learning his trade at the castle; a half truth, but one that allows the two to grow a more honest affection. Ella doesn’t attend the ball determined to win the prince like her upstart stepsisters, but for a chance to again meet the young man she can’t stopped thinking about. There are other slight alterations made to supporting characters, too, but it’s all done at the benefit of deepening characters’ relationships and motives.

This simple narrative is given nuance and depth thanks to Cinderella‘s exceptional cast, comprised of stage and screen icons and young talent tapped from today’s best television. Lily James (Downton Abbey) plays the inherently good Ella – only later dubbed Cinder-ella by her stepsisters – as earnest and genuine, and ably embodies her courageous nature. Richard Madden (Game of Thrones) easily fits the mold of a classic Disney prince, but he infuses Kit with more humor and personality than most iterations. Their relationship develops naturally, or as naturally as any far-fetched fairy tale will allow, but never is it played as Kit coming to the rescue of poor, downtrodden Ella.

Instead, Ella faces her horrid step-family’s treatment full-on, choosing not to abandon the home in where she still has so many happy memories. She takes her fate in her own hands when given the opportunity (and a little magic) and never lets her situation dampen her spirits. Ella’s courage is quiet and reserved, she’s feminine but never weak, and it’s refreshing for a heroine to be celebrated as such even if she’s not brandishing a sword or leading armies. 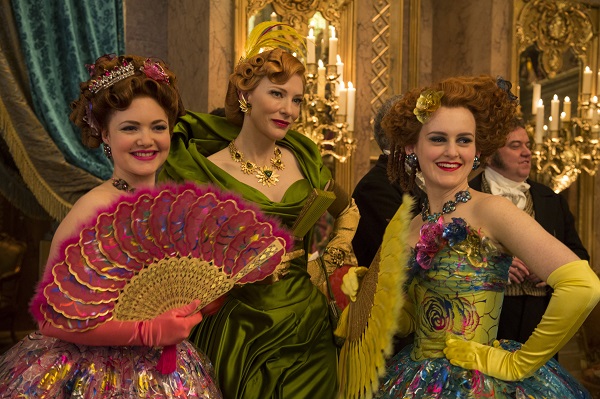 Stealing the show at almost every turn are Lady Tremaine and her daughters, played by the always-amazing Cate Blanchet and rising stars Holliday Grainger (The Borgias) and Sophie McShera (Downton Abbey). Blanchet’s Tremaine is no stock villain, but rather cool and calculating with a cruelty masked by her pleasant manner and looks. She’s also given a backstory that almost paints her in a sympathetic light had it been given more focus, but Blanchet’s subtle portrayal hints at it. Her daughters, Anastasia and Drizella, don’t have her charms and are haughty and ridiculously ignorant, all to great amusement. Seriously, the wicked step-sisters in the animated classic are a tough act to beat, but Grainger and McShera’s sisters are a lot of fun to hate.

Helena Bonham Carter’s Fairy Godmother is another bright spot in an already glowing ensemble. She’s bubbly, fashionable, and particularly good at shoes, but also gives Ella the reassurance needed to really fight for her dreams. Her role is also brief, which will surely be good news to any suffering from an over-indulgence of Bonham Carter (thanks for that, Burton). Rounding out the cast are veteran actors Derek Jacobi as The King and Stellan Skarsgard as a conniving Grand Duke, and their inclusion add a little dignity to the whole affair.

However, the real star of Cinderella is the film’s incredible costuming and art direction. Everything and everyone looks absolutely stunning, and it all culminates with the royal ball. (To better appreciate all the fine details, click the below image for a larger size.) The use of CGI also appears limited, and beyond pumpkins growing into carriages, many of the effects were handled with make-up or old school film wizardry. 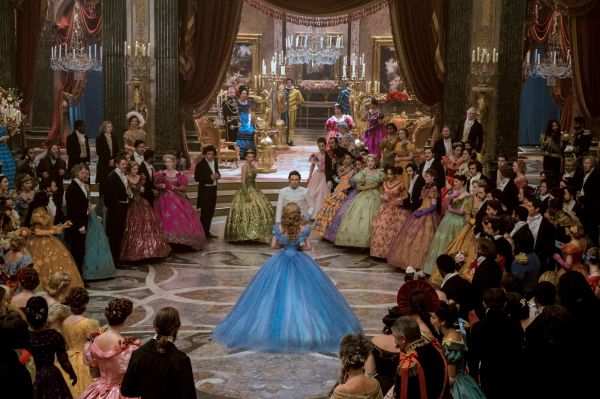 The costumes were designed by three-time Oscar-winner Sandy Powell, and if she isn’t again nominated for her work on Cinderella, I’ll riot. From Ella’s iconic ball gown to the outlandish dresses of her stepsisters to even the palace guards and Ella’s lizard footmen and goose coach driver–the costuming is impeccable. The set decoration, too, is finely detailed and well fit for every scene. And surely, it didn’t hurt that Cinderella used real castles and royal courts to give all this make-believe a realistic though romanticized setting.

Undoubtedly, there will those who’ll criticize Cinderella for not taking enough liberty with its source material, for not pushing Cinderella to become a woman toughened by her cruel life, too world-weary for trivial pursuits. But that again, would only serve to present one kind of bravery, only one way of acting courageous.

At times, Cinderella may sway towards being a little too saccharine or melodramatic, but it never loses sight of the message at its heart. Being kind and having courage won’t guarantee a happy ending, but it will allow for more opportunities to reach that happy ending.