2015. A desolate, primitive time. At least, that is how it seems to five time-travelers from 1.2 million years in the future, who find themselves stranded in the jungles of Hawaii after their equipment suffered an unknown error. With the ship itself destroyed and their chronobeacon damaged beyond repair, the five have no hope of rescue or returning to their own time.

One year has passed since the time-crash and the five have drifted apart. Only Herb (the emotionally detached technophile) and Ursula (the heart and soul of the group, who wants to die more than anything) have maintained contact with one another. Marge (the bi-polar weapons specialist) has been discussing religion and fighting in a variety of bars. Nobody is sure what happened to Phil a.k.a. The Total Bastard.  And Art, the team leader, has been living in the abandoned missile silo that he had converted into a base for the team before they decided to go their separate ways.

Still, when an odd acid-spewing monster appears in Athens, Greece, Herb takes it as a sign that the team must put aside their differences and reunite. Because their travels through time have left a door open and now menaces from elsewhen are passing through the rift into the backward world of 2015.  Like it or not, these five Past Aways must use their advanced technology to save their past in order to preserve the future. 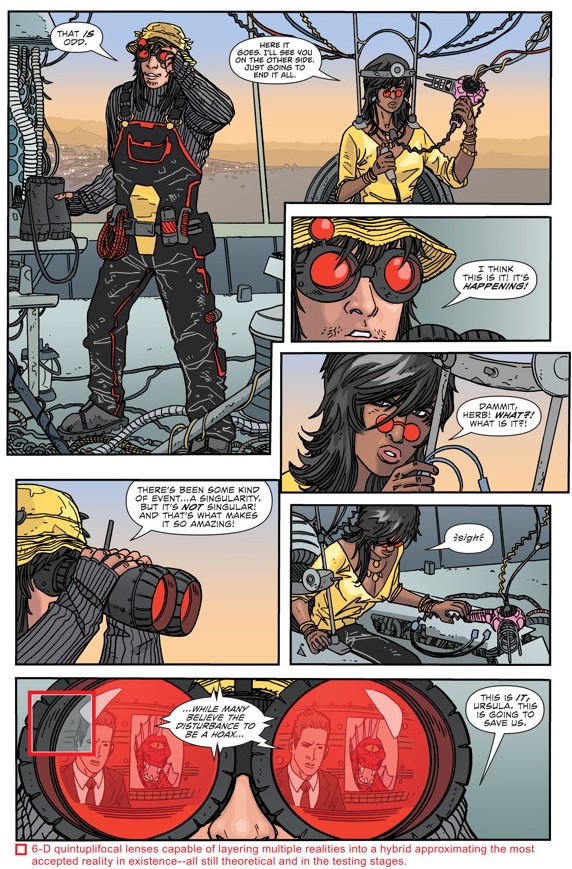 The biggest problem with Past Aways #1 is that we learn more about the titular characters from the blurbs on the cover than we do from the story itself. Even then, “wants to die” isn’t much of a character trait and there’s no interaction between most of the main characters to explain just why Marge thinks Art is an asshole or why Phil is such a bastard. We are told far more than we are shown.

Thankfully, Matt Kindt’s script makes up for the weak characterization in other areas. The base concept of this book proves a welcome change of pace from the standard time-travel tropes. For all the science-fiction based around the idea of marooned chrononauts, surprisingly little of it is based around future humans becoming stuck in the modern day.

Fans of Scott Kolins’ artwork will be pleased to find that he is in fine form here.  Kolins is famed for a style that is lightly inked yet highly detailed and that distinctive look is well in evidence here. Colorist Bill Crabtree enhances this with a vibrant palette that leaves the finished artwork looking far brighter and powerful than your standard science-fiction comic.

While this series may not appeal to all audiences, genre enthusiasts will find much to admire in this first issue of Past Aways. The artwork is great and it has a brilliant concept. Hopefully future issues will bring about more interaction between the core cast to better establish their personalities past a series of stock traits.