An encounter with an overly large space bug requires an emergency landing to pick up some more windshield-wiper fluid. But it turns out the planet of folksy cat-people that Rick and Morty land on is about to go through their yearly Purging. Purging, in this case, does not involve forced vomiting. Instead it involves people being allowed to rape, steal and kill as much as they like for one night a year.

It might seem like a hackneyed premise stolen from a certain horror movie that somehow merited a sequel and is fast becoming a franchise. But Purging is a highly respected tradition on many alien worlds, according to Rick. Though most of them call it something like “The Cleansing”, “The Red Time” or – in the case of one particularly unimaginative world – “Murder Night.”

Of course it’s no skin off Rick and Morty’s noses as they can easily get off world before the festival starts. Unless Rick gets curious and randomly decides he wants to watch a bunch of weird cat people kill each other. Or Morty decides to play hero and insist on saving a cute cat girl around his own age. And then something goes wrong and leaves them stranded on this terrible “Purge-Planet” with almost no hope of escape. But what are the odds of that happening?

Pretty good, it turns out. Which is why Rick is forced to call Summer to make arrangements for a special care package to be sent to save him and Morty. Unfortunately, Jerry has chosen this moment to try and bond with his teenage daughter. And, as usual, he is more hindrance than help. 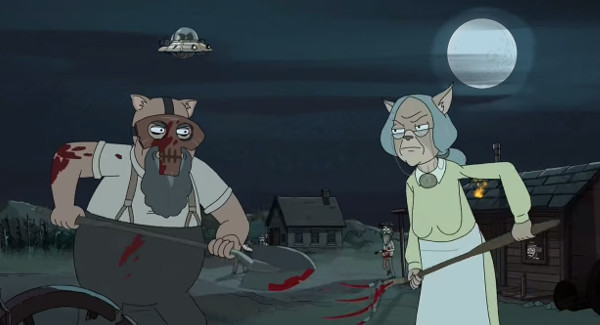 It would be fair to say that Look Who’s Purging Now feels a bit cliched. With the exception of last week’s episode, Season Two of Rick and Morty has largely tried to present new ideas and move beyond the standard formula of “Rick and Morty go somewhere and things go wrong because Morty is an idealistic idiot while something wacky happens to the rest of the family.” Yet here we are – one episode away from the end of the second season – with an episode that perfectly fits into that mold.

And yet, it doesn’t.

It helps that the episode immediately hangs a lampshade on the whole affair and then revels in how utterly insane and stupid the whole premise is. But Look Who’s Purging Now goes beyond simply satirizing bad satire. It also continues this season’s trend of developing the characters.

The changes are subtle but they are there. Morty, for instance, has progressed enough as a character that he now tries to appeal to Rick’s sense of reason rather than making emotional appeals to Rick’s almost non-existent sense of decency. And when that fails, he blackmails Rick into doing what he wants, suggesting that Morty is starting to learn from Rick’s example as a manipulative bastard.

Shockingly, Rick has changed as well. He’s still an amoral lunatic but he seems less inclined to argue with Morty or dismiss him and his ideas as being outright stupid. At the very least Rick seems to have realized it’s just faster to humor Morty and let him figure things out on his own. And Summer has progressed beyond being completely self-absorbed, not hesitating a moment when she is called into action.

Of course there’s plenty of silliness in this episode for those who don’t really care about breaking cliches and character development, so long as we get to see a bunch of weird ultra-violence and randomness. Perhaps the best of these moments involve Morty’s being forced to listen to one of the cat people’s screenplay (It Makes Sense In Context) and the post-credits stinger gag where we find out that for all the rest of the cast has changed, Jerry remains Jerry.