The Kabooooom crew may all love pop culture, but we all have different tastes. In Kabooooom Hangouts, we bring together our different points of view and talk about today’s hottest comics, television shows and movies. The end result is an opinionated, informative, thought-provoking and – hopefully – amusing conversation. Enjoy.

[Warning – SPOILERS for DOCTOR WHO Series 9, Episode 2 “The Witch’s Familiar”]

Rush: Can we begin by agreeing that Missy is the best Master ever? She’s the Master I always wanted but never knew I wanted.

Matt: She’s amazing, I agree. But it’s a little early to go calling her the best. Then again, I’m a Delgado loyalist. I’m reminded of something Tom Baker once said about The Doctors…

Rush: We can agree that she’s better than Roberts, right? Continue…

Matt: There was a convention panel where several of the actors who played The Doctor were asked if they thought the age of the actor was an important factor. And Tom said he didn’t think it was important because nobody who had ever played the part had gotten it wrong.  I think the same thing can be said about The Masters – even Eric Roberts. Then again, I’m one of those weirdos who is hard pressed to pick a favorite Doctor because I’ve come to enjoy all of them.

Rush: I was just having this discussion, actually. Well, with respect to the Doctors, at any rate.  I agree with Baker and, in Capaldi’s case, there was a definite reason that the age difference between 11 and 12 was so drastic. As for the Masters, the character has always been over the top and a bit hammy, no matter which actor portrayed him, which is part of his charm. That being said, Missy brings a madness with the character that isn’t over the top; it’s just a wonderful portrayal of the character. I don’t have a favorite Doctor and I don’t know that I could even choose a least favorite. Baker had it right when he said that all of the actors have played the role perfectly.

Matt: Which is no small task given the gravity of the role and the legacy behind the show.

Rush:  It’s a very tough character to play because the actor has to incorporate traits from each and every Doctor before him. In Capaldi’s case, I love that he has been channeling many of the classic Doctors! Even the difference between his Doctor and Smith could be compared to Colin Baker and Peter Davidson.

Matt: That’s true. In fact, I made that comparison regarding how you have a generally lovable Doctor going through a difficult regeneration and the female companion having to deal with a more combative incarnation when she’s used to the nice guy.

Rush: It was brilliant to get two classic enemies with the first two episodes of the season! Both in ways that we had never seen them before.

Matt: That brings us to Davros and his role in this story. I don’t think the character has been this well utilized since Genesis of the Daleks.

Rush: Agreed. He was given a completely new level and I actually found myself pitying him for a moment. Just a moment.

Matt: Which brings to mind the most wonderful and yet most vexing thing about this episode.

Rush: The Doctor in the Dalek?

Matt: No, but I do want to get to that. The scene between Peter Capaldi and Julian Bleach is incredibly well acted. and it’s a good bit of writing from Moffat.

Rush: It was a perfect answer to those who claim Moffat can’t handle character development.

Matt: Yes. And I dare say it’s Capaldi’s best moment as The Doctor yet. And for all the well-deserved praise Michelle Gomez gets for playing The Master, I don’t think Bleach has gotten nearly enough credit for what he’s done as Davros.

Rush: I would agree with that. Anyone that can actually make an audience understand how Davros could become who he became deserves some credit. Still, the moment he mentioned the sunrise, I knew it was a sham. I was glad it wasn’t lost on the Doctor. The more I think about it, the more I agree.

Matt: And that’s the vexing part. That whole scene is genuinely moving and you actually get to see that common ground between The Doctor and Davros – two men who have done unspeakable things for what was ultimately the same end – preserving their people. But it’s all a lie! Yet it seems far too genuine – in terms of the characters – to be a complete sham on Davros’ part. But exposing himself by revealing that much truth doesn’t seemly wholly true to form either.

Rush: I thought it was inevitable that they would find common ground. After all, the Doctor would make a great Dalek… 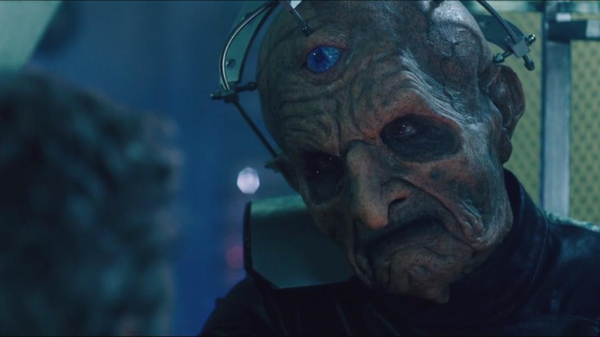 Rush: How did you feel about Davros’ assistant? The man made of snakes?

Matt: I thought it was an interesting idea and one more example of Moffat’s ability to draw off of childhood fears to make truly horrific monsters. And on that note… The Dalek Sewers.

Rush: They were horrible! I didn’t love that they wound up being the saving grace but it was absolutely horrible to think that Daleks never die. I mean, I wouldn’t even wish that on Jared Leto and I HATE Jared Leto.

Matt: I’m just amazed that Moffat got the idea of living poo murdering someone past the BBC censors. Even if it was The Daleks drowning in it.

Matt: On that note… as you said, now we have Daleks with a little bit of Time Lord DNA in them…

Rush: Yeah, I was thinking about that. It couldn’t have been much but even a little bit of Time Lord is too much in a Dalek.

Matt: It isn’t given a chance to develop, but in a weird way Moffat may have brought everything back to the status quo after Destiny of the Daleks.  Back then, there were two factions of Daleks – one loyal to Davros and the other devoted toward killing the impure ones following the Kaled scientist who created them. So it will be interesting to see if the poo Daleks – because they are still Daleks and should, in theory, be part of the grid Davros was hooked up to – regenerate and form their own faction.  Maybe the poo Daleks got enough energy to regenerate but that was it. Whereras Davros and his personal guard are now “impure”, tainted by The Doctor’s DNA.

Rush: I hadn’t considered that but if that plays to fruition, it would be a terrifying race of Daleks and, really, it would be wonderful to have scary Daleks again. They would be absolutely insane.

Matt: And a Dalek civil war would make things interesting on top of that. 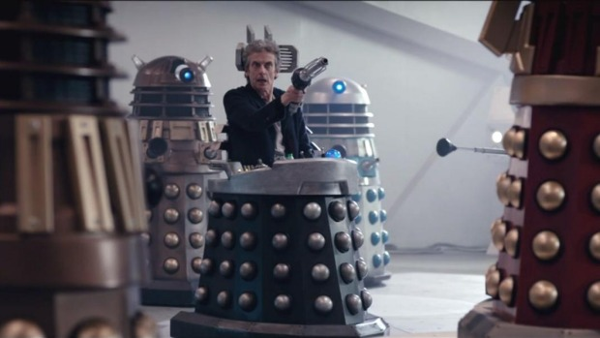 Rush: Two more things: sonic sunglasses and the Doctor in the Dalek. Thoughts? I found one of those things cool and the other a bit meh. Can you guess which was which?

Matt: By The Doctor in the Dalek you mean him riding in Davros’ chair?  I thought you meant his DNA imprinting into them earlier.

Rush: Yeah, riding in the chair.

Matt: I liked them both, actually. The glasses are very David Tenant and I’m sure Capaldi was channeling him during the party with the tank in the last episode.

Rush: The bit with the chair seemed silly to me.  Which is ironic, considering the sonic sunglasses were super silly, but I loved them!

Rush:  Seeing the Doctor in the chair was a bit too close to seeing him as a Dalek for me. I think Moffat wanted that comparison to be made, though.

Matt: I thought the chair bit was a nice visual gag, a reference to the first time The Doctor hid inside a Dalek casing (way back in the Hartnell era) and a logical way of him disabling Davros as a threat.

Rush: Which, I suppose, goes back to the earlier remarks about him bringing in the classic Doctors in this season. Another point I hadn’t considered. DAMN YOU, MORRISON!  Way to out-Who me, Starman, way to out-Who me.

Matt: On that note, we got another nod to Moffat’s Curse of the Fatal Death – with Davros offering The Doctor the only other chair on Skaro. Because really, why DO the Daleks keep chairs around when none of them use them?

Rush: Much like the number of licks it takes to get to the Tootsie Roll center of a Tootsie Pop, the world may never know.

What did you think of “The Witch’s Familiar”? Let us hear from you in the comments below and let’s keep the discussion rolling!

Doctor Who airs Saturday nights at 8 pm on BBC America.