It is clear from the cover of Shonuff Studio Presents #1 that the creators remember The Eighties and remember them fondly. But what else would you expect from a studio named for the villain of the 1985 classic The Last Dragon?

Like The Last Dragon, Shonuff Studio Presents #1 is difficult to quantify. The task is made doubly difficult by the book’s status as an anthology. The only adjective that truly describes this book is eclectic, for it is a mix of different stories and styles, being the collaborative work of three different artists who pooled their resources to create a comic together.

The first story, which is also the cover story, is titled Aerobicide. Perhaps it is no coincidence that this is also the name of a 1987 horror movie, that was also known as Killer Workout. But this Aerobicide is no slasher flick! If anything, it inspires comparison to the recent parody film Kung Fury or the Rollerblade movies of Donald G. Jackson.

There’s not much of a plot but that’s to be expected given the genre. If you require any story beyond “gorgeous aerobics enthusiast/ninja kicks beach bully ass”, then this story won’t be your cup of tea. The rest of us, however, will enjoy it immensely. And the artwork by Terry Parr – whose style is comparable to that of a more detail-driven Bruce Timm – proves the equal of the story.

The second story – The Pie Piper Of Hamland – is an entirely different kettle of fish. Rendered by writer/artist Halo Sama in a classic manga format (complete with monochromatic coloring), this story depicts a day in the life of a pie maker in the magical kingdom of Hamland. The style is cute but please be advised this is no children’s tale and this comic, like most fairy tales, is deceptive in its apparent innocence. 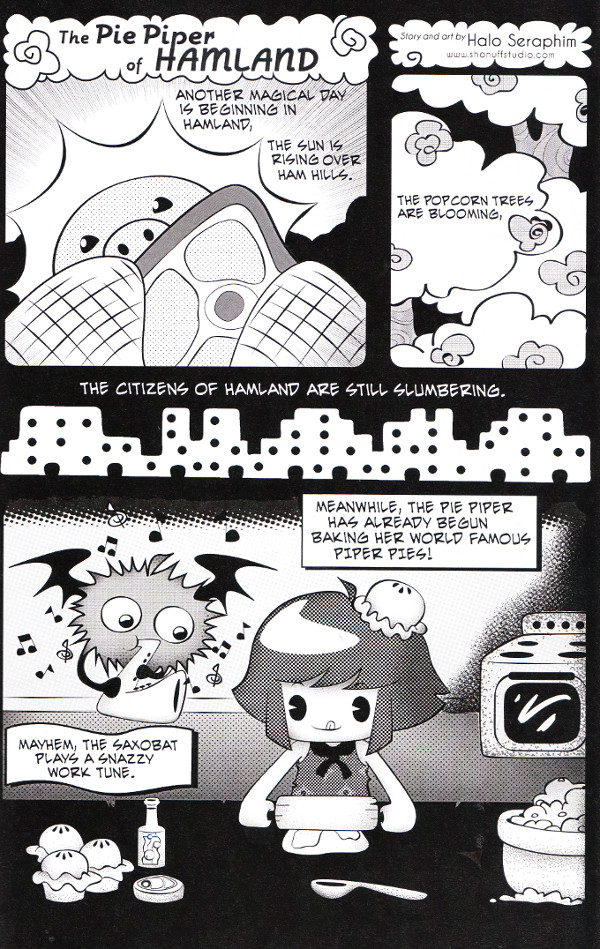 The second half of the book is largely taken up by a gallery of different pieces. The gallery showcases more of Parr and Sama’s artwork, along with the work of Shonuff Studio’s third member, Jonathan Miller. This section stands as an interesting study in contrasting styles.

The final comic – also written and drawn by Halo Sama – is a one-page strip depicting the afterlife of a serial killer, who is reincarnated as a cat after being executed. Logically the comic is titled Serial Kitty. It’s short but sweet and could prove an interesting set-up to a more detailed series of comics down the line.

All in all, I enjoyed Shonuff Studio Presents #1. Most of the comics contained within seem to be setting up for something bigger. I hope we’ll see more issues from the artists of Shonuff Studio in the future.