Gabby Gonzales and Cindy Wu were inseparable best friends. Then something weird happened in the laundromat run by Gabby’s father, which got the attention of a man called The Doctor. And Gabby was pulled into his world, following him to heaven knows where… or when!

Cindy briefly joined them when another adventure brought The Doctor and Gabby back to early 21st century New York City. It was an adventure which brought them into contact with the strange Cult Of The Black Pyramid and nearly destroyed all life in the universe! Cindy was scared but handled herself well enough that The Doctor offered to let her join him and Gabby on his space-hopping, time-traveling ship.

Cindy declined… and has been regretting it ever since.

The brief reunion with Gabby did give her best friend a chance to give Cindy a gift – a sketchbook/journal Gabby had made to show Cindy everything she and The Doctor had been doing in her time away. It was a thoughtful gesture but all it did was fuel Cindy’s wanderlust and make her wonder  just what she’d given up even more.

Fate’s a funny thing, however, and Cindy will soon have more adventure than she ever dreamed of. Because there’s much more to Gabby’s journal than meets the eye. And Mister Ebonite – the mysterious figure who runs the underground auction-house dealing in alien artifacts that started Cindy’s first adventure with Gabby and The Doctor – wants it badly enough to kill for it.

Luckily Cleo Hunsicker – a Cult Of The Black Pyramid agent who seemed decent enough despite her affiliation – happens to be there to help Cindy when Ebonite strikes. But can Cleo truly be trusted? Or will Cindy have to face the alien menace alone this time? 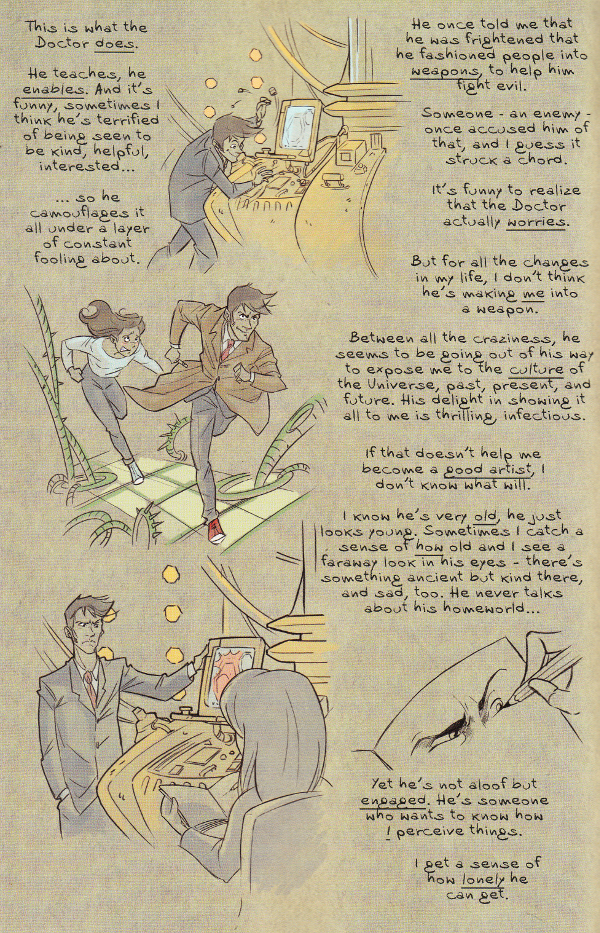 Some of the best Doctor Who stories only involve The Doctor in a limited capacity. Indeed, Blink – considered by many to be the greatest episode of the modern series – barely involves The Doctor at all! This issue, titled Cindy, Cleo And The Magic Sketchbook, is of a similar bend.

The Doctor doesn’t figure into the action of the story at all, yet he is still a presence thanks to the wonderful opening sequence, where we get to see The Doctor through Gabby’s eyes as she relates her observations to Cindy through her journal. It’s a wonderful conceit. Had the entire issue been nothing but Cindy reading the journal, it would have been amusing and insightful.

The action which makes up the book’s second half proves just as riveting.  And Nick Abadzis spins a wonderful tale as he brings back Cleo – one of the more interesting supporting characters in the comics’ history – as well as the leader of The Cult of The Black Pyramid, Erik Ulfriksson, for one more turn.

Long-time readers of this series will get the most out of this story but Abadzis does a fine job of explaining everything for newer readers who might have missed the original story arc. And long-time Doctor Who fans will want to read this story just for the end. I won’t spoil why. Just trust me.

The artwork is as amazing as the script. Elena Casagrande handles the “real life” portions of the comic while Arianna Florean offers up the Don Bluth’ style illustrations of The Doctor that fill Gabby’s journal. Both Casagrande and Florean make this book into something visually spectacular.

If you’re a Whovian who has yet to get into the wonderful world of comics or a comic reader who wonders what all the fuss about Doctor Who is, this issue would be a wonderful introduction to both worlds. It won’t be nice and it won’t be safe. But it will be the thrill of a lifetime!