The unusual and the impossible are daily occurrences for The Doctor. But even he found it a bit unlikely that a letter could magically appear on the control console of his time machine, The TARDIS.  Never mind that the letter also claimed to be from his long-lost granddaughter, Susan!

Still, The Doctor loves a good mystery. And when he traveled to the suggested coordinates (with his current companion Clara Oswald in tow) and found Susan along with several of his old traveling companions he’d never be able to see again, there was only one word to come into The Doctor’s mind – Trap.

Faster than you can say Tchaikovsky, The Doctor’s friends are turned into Nutcrackers! And they move in to grab The Doctor and Clara for reasons that are almost certainly not in The Christmas Spirit.

What follows is a race through a mindscape of madness. The Doctor and Clara soon find themselves not only being attacked by corrupted versions of The Doctor’s former companions but jumping into Christmas postcards, running from landscape to landscape… and finally being chased by Krampus into a giant Snakes and Ladders game!

Have The Doctor and Clara gone mad together? Are they trapped in a world of pure imagination? Or has one of The Doctor’s oldest and most dangerous enemies come to play?

Mariano Laclaustra does a phenomenal job of bringing all of this to life. There’s a number of cartoonishly ludicrous things that occur in this issue yet Laclaustra makes them all seem totally natural and the action flows smoothly from panel to panel. Laclaustra also perfectly caricatures the likeness of Jenna Coleman and Peter Capaldi – a far more difficult feat than many would presume! The colors by Carlos Cabrera are well-chosen, enhancing the finished art flawlessly. 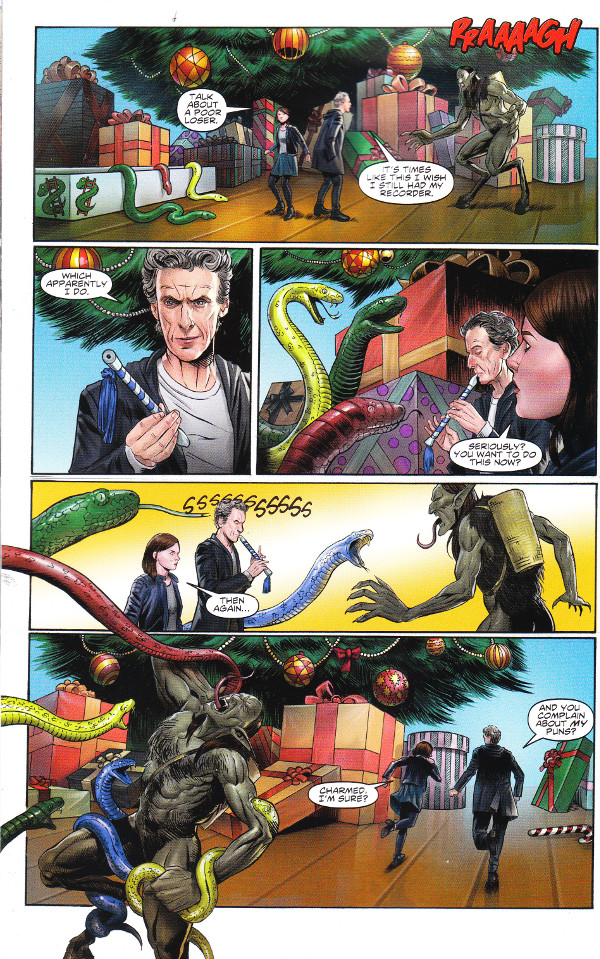 Writers George Mann (Doctor Who: The Eighth Doctor) and Cavan Scott (Doctor Who: The Ninth Doctor) have delivered the perfect treat into our stockings. Those Whovians who just can’t wait for this year’s Doctor Who Christmas episode will find this holiday special to be just that. Watching Clara and The Doctor contend with all manner of festive madness is highly amusing And fans of the classic Doctor Who series will be gratified by the reveal of the culprit as well as the touching ending.