Finally faced with an arch-enemy of their own, Billy Whalen and Pete White have fully embraced the life of super scientists. Now going by the code names Quizboy and The Pink Pilgrim, they fight a never-ending battle against the evil billionaire, Augustus St. Cloud. But will that battle finally end after St. Cloud secures an artifact of great power that could alter the world as we know it?

Back in New York, Team Venture hasn’t been in town long enough for Brock to finish unpacking and already Dr. Venture is running his brother’s company into the ground. Between firing all of the old staff and spending an extravagant amount of his new fortune on pointless luxuries, the stock-holders are nervous and stock-prices are plummeting.

This looks like a job for The Captain – the former ghost pirate turned right-hand-man who organized everything for Jonas Venture Junior! Unfortunately, The Captain – left with an addiction to tranquilizer darts after years of being darted by super-villains – has fallen off the wagon. It would take skilled professionals months to help him on the road to recovery. Too bad he has Hank and Dean Venture instead. Oh, and a kitten!

On the villain’s side of the street, The Monarch has learned that Wide Whale’s backing of the Guild of Calamitous Intent’s new ruling council was contingent on Whale being appointed as Dr. Venture’s new arch-enemy. Unable to strike at the upstart crime boss – who is so powerful he has superheroes collecting protection money on his behalf – The Monarch does the only thing he can do. He starts harassing every villain above him on the waiting list to professionally “arch” Dr. Venture. 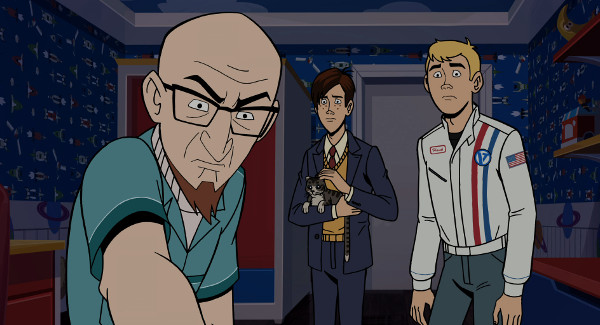 For all of its complex continuity, The Venture Bros. has rarely required being watched in a sequential order. Apart from the season openers and closers, most of the individual episodes stand on their own merits. While there is a continuing storyline, it’s possible to watch a single episode and get the gist of what the show is about.

Maybe No Go is an exception to this. While the brunt of the episode is focused on Quizboy and White dealing with the latest bit of St. Cloud’s stupidity, the subplots involving The Captain and The Monarch are dependent on having seen last week’s episode. Thankfully, the script for this episode works well despite that requirement and at this point I think it’s safe to say that The Venture Bros. has a firmly established fan-base who will have seen last week’s episode.

The high point of this episode – as per usual – is the interaction between the characters and the oddities of various relationships. Brock and Sgt. Hatred (now employed as a tour guide for the Venture Tower) seem to be developing an odd friendship in spite of their mutual animosity for one another in past episodes. Billy and White arguing is always a treat. And the voice acting is top-notch as always, with Messrs. Hammer and Publick providing the lion’s share of the voices.