It’s the morning after Haranguetan’s assault on the VenTech Tower and it’s all over but the crying.

Well… not quite. There’s also the clean-up of a sizable ape-themed super-villain’s corpse from the crater in the center of the VenTech lobby to tend to. Then there’s a widow to notify. And hunting down and killing the bastards responsible.  All in a day’s work for Dr. Mrs. The Monarch, in her new position as The Guild Of Calamitous Intent’s public face.

Little does she realize that the events of last night are about to bring about an even bigger firestorm. With Haranguetan out of the way, the next super-villain on the waiting list to pit their wits against Dr. Venture – a hydrocephalic college professor who arches under the name Think Tank – is free to make his move. And Haranguetan’s widow – a bar-tending, tough-as-nails Irish matron called Battleaxe – has revenge on her mind. Just as soon as she gets a hold of their battle-wagon/home – The Haranguetank!  Which, to be fair, is more of an armored mobile home than an actual tank, but how can you let a good triple pun like that go unsaid?

The grand irony of it all? The person responsible for all of Dr. Mrs. The Monarch’s current problems is not just very close to home – he lives in her home! And following his successful (if semi-accidental) elimination of a competitor for the official position of Dr. Venture’s Arch-Enemy, The Monarch (aka The New Blue Morpho) is busily planning his next move. Just as soon as he gets the Morpho-Mobile out of impound…

Venture Bros. co-creator Doc Hammer claimed, in a 2013 intereview, that they “could kill Hank and Dean tomorrow and nobody would care.” Based on Season Six’s treatment of the titular brothers, it seems Hammer and co-creator Jackson Publick may have stopped caring about them. At the very least. they seem content to fall back on easy jokes about Billy Quizboy eating a burger on the floor while tripping on Dr. Venture’s goofy gas (has it really been almost ten years since the David Hasslehoff Drunk Burger video?) rather than focus an episode on either of the boys’ lives in New York City.

Granting that the show has evolved far beyond its original concept of parodying classic boys adventure fiction ala Hardy Boys and Johnny Quest, we’ve seen almost nothing of the boys this season. At least Hank has a subplot romancing Wide Whale’s daughter, but little has been done with it. And even the fleeting glimpse we see of Dean’s new life as a college student in this episode is only a means to the end of unveiling the MODOK-esque Think Tank.

The show has also evolved in regards to the quality of guest star it has attracted.  The show has never wanted for talent in this regard, bringing in geek icons such as Stephen Colbert and Nathan Fillion. Yet it is still jarring to look at the cast list for this episode and see the likes of Boardwalk Empire‘s Jeffrey Wright or SAG Award Winner Barbara Rosenblat (Orange Is The New Black). 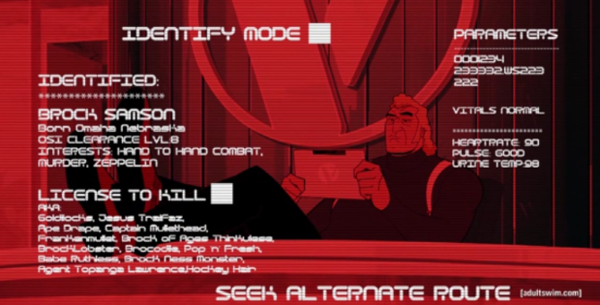 That being said, the show is still a laugh riot. This episode alone is filled with a number of references and gags that will require pausing the DVR or on-line stream. Think-Tank’s scanner, for instance, lists off every alias and code-name Brock Samson has used in the series’ history, along with every nickname given to Brock by fellow OSI agent Shoreleave and every insult thrown at him by the bartender at Nightin’ Ales strip-club. And the fanboys will no doubt argue as to whether or not the Morpho-Mobile’s flight-mode is a shout-out to Back To The Future or the Thunderhawk from M.A.S.K.

Tanks For Nutin’ is a strong episode and Season Six of The Venture Bros. continues to be a strong season. The series is as enjoyable as ever, despite the individual episodes no longer standing on their own and the greater emphasis on a unified plot. Still, one hopes Dr. Orpheus will be putting in an appearance soon – perhaps relocated to a new home in Greenwich Village?