Princess Artemisia of Beldora is not happy. She should be content with her life. After all, she is beautiful, rich, powerful and about to be formally betrothed to the most eligible prince in all the realms, just as soon as their fathers work out the details of a treaty uniting their respective kingdoms against the dark realm of Grimoire.

Yet despite all that she has, “Misty” wants more. She wants adventure in the great wide somewhere. She wants to be part of that world.

Most of all, she wants to wield the magic sword Leveler against the dread Lord Badlug and his army of Shadelings. She wants to be the hero who restores hope to her people – not some glorified puppet whose only purpose is to look pretty and inspire other people to fight for her! At the very least, she’d like to get married to someone who views marriage as something more than a necessary obligation!

Unfortunately, Lord Baldug has marriage on his mind as well. For uniting his kingdom with Beldora through a marriage to Artemisa will break the curse that confines him to the dark land of Grimore. Unfortunately for him, while he may hold Artemisa in his castle, she refuses to be a gracious prisoner. And Misty will find that there is more than one way to bring down a dark lord… 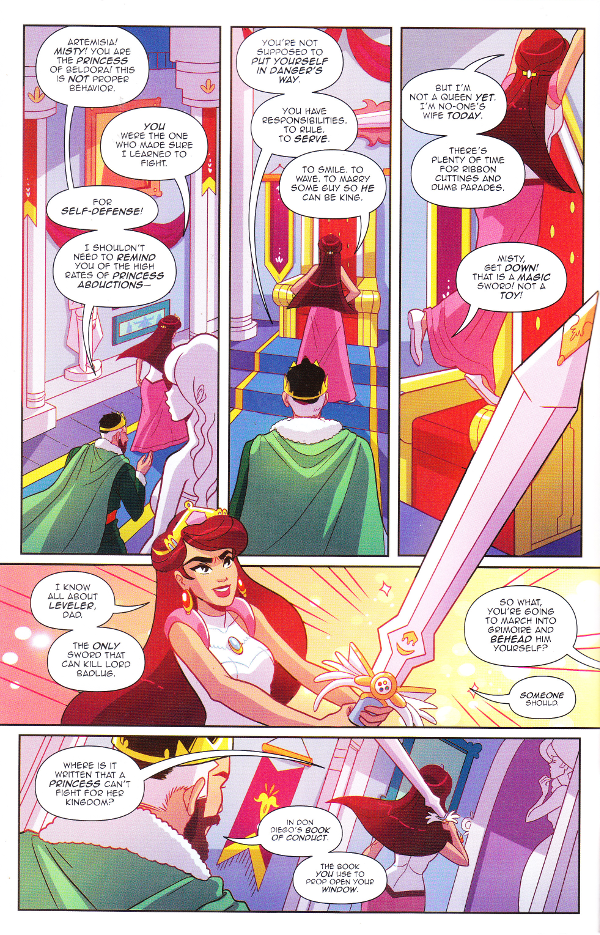 Comics like Fables and Princeless were presenting us with princesses who save themselves long before Jonathan Coulton wrote a song about them and Greg Pak turned that song into a Kickstarted comic. The last few Disney princesses – Elsa, Anna, Rapunzel and Merida – didn’t need a prince to save them. And between Xena, Dejah and Diana (among others), it’s a fair bet that warrior princesses out-number the regular kind on the comics page.

This is an awesome thing. And yet one wonders, looking at the vast array of Fiction today, if there’s any way left to subvert the standard fairy tale?

Another Castle #1 shows us that yes, yes there is.

It’s impossible to describe how without giving away the game. Suffice it to say that Andrew Wheeler managed to put a unique spin on what might have been just another tale of a brave princess proving that she can be her own hero. To say more would be to deny you the chance to see this story for yourself.

Wheeler’s script is well-matched by the amazing artwork of Paulina Ganucheau. Those who enjoyed Ganucheau’s recent work on Zodiac Starforce will find her work here of equal quality. Indeed, it just may surpass it!  The colors are nice and vivid and the lettering by Jenny Van Tran is crisp and clear.

Another Castle #1 is not just a good send-up of a tired trope nor is it a brilliant bit of parody. It is a good comic, plain and simple. And you should be reading it and every issue to follow until the inevitable ever-loving ever after.