In a time of ancient gods, warriors and kings, a land in turmoil cried out for a hero. She was Xena – a mighty princess, forged in battle, reformed from her own days as a raider and slayer. By her side rode Gabrielle –  The Battling Bard of Potidaea – who would change from a simple storyteller to a fearsome fighter in her own right under Xena’s tutelage.

Their courage would change the world. But would they change it for the better? That tale remains to be told…

After being hidden away from the world for over two decades by a sleeping enchantment, Xena and Gabrielle awoke into a changed world. One where the Roman Empire they had died fighting had grown more powerful. In the end, they would battle the gods themselves to save the soul of Xena’s daughter and Ares would give up his own power to save their lives.

Now, half the gods are dead. All of Xena and Gabrielle’s allies are banished, missing or dead. And Rome is further cementing their hold on the land in the wake of rumors regarding The Harpies – a gang of outlaw women who fight for the poor and downtrodden – having turned savage, destroying every village in their wake.

Naturally Xena doesn’t believe a word of it, having encountered The Harpies before and finding them to be honorable warriors. But can she and Gabrielle find proof of The Harpies innocence? And even if they can, will they be able to stand up to the might of a unified Roman Empire? 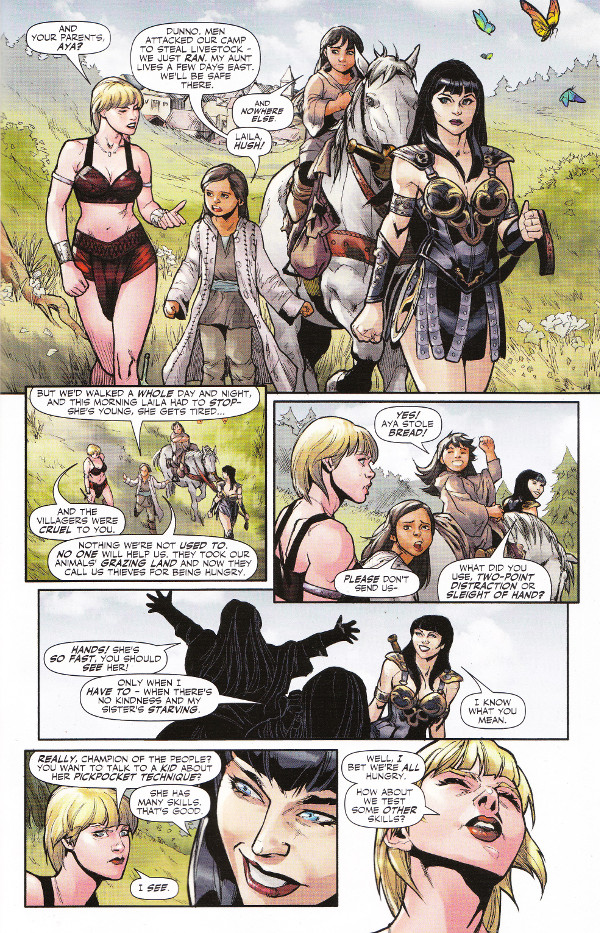 Fans of Xena: Warrior Princess will likely enjoy this new series by Dynamite Entertainment. The comic picks up right where the television series ended. And writer Genevieve Valentine has perfectly captured the voices of Xena and Gabrielle.

Unfortunately, this book isn’t friendly to more casual Xena fans like myself. If it weren’t for the blurb on the title page, I’d have been completely lost as to the set-up of the series! And for a comic devoted to a warrior princess, this first issue is surprisingly light on action. It’s good for what it is but one typically expects a Xena story to have more combat than one page of Xena thwarting a racist villager and one splash-page in a flashback 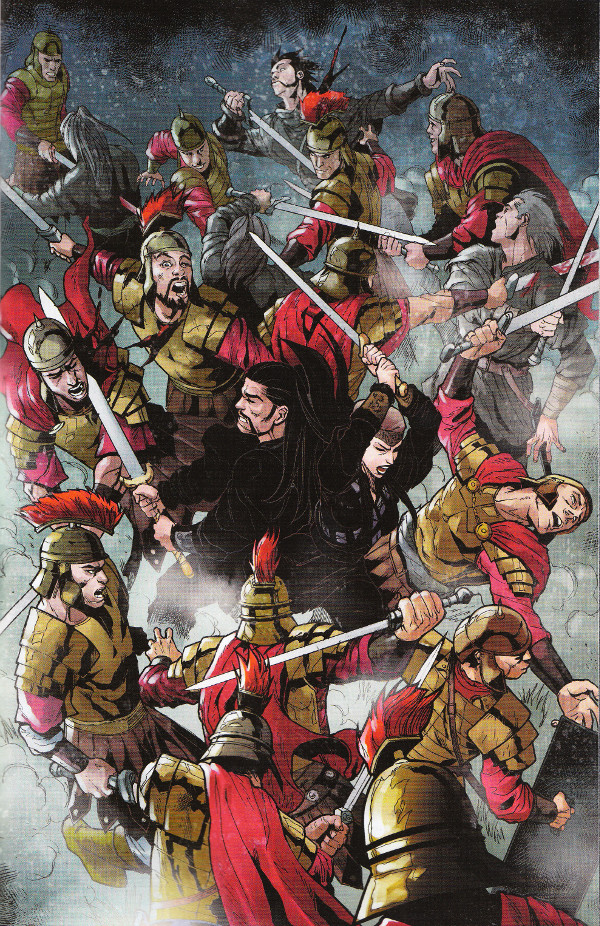 The artwork is similarly mixed. I enjoyed Ariel Medel and Nanjan Jamberi’s previous work together on the recent John Carter: Warlord of Mars series. Sadly, this issue isn’t their best work.

Medel generally does a good job capturing the likenesses of Lucy Lawless and Renee O’Connor. Yet there are some panels where the shapes of heads are so off-model that you could sharpen a chakram on some characters’ chins! And Jamberi’s colors are oddly muted and washed out to the point that Gabrielle’s hair is near-white on some pages while Xena is sporting more grey than black in her ebony tresses.

All in all, this comic is good but not great. Long-time Xena fans will thrill at the story, though new readers may be slightly confused. The artwork is largely serviceable but contains a few oddities uncharacteristic of a usually excellent art team.