It’s amazing Green Arrow and Black Canary are so widely recognized as a couple. Strictly speaking, they’ve been apart more than they’ve been together over the course of their lives as fictional characters. Whether it was by death or writer fiat, the two were only a couple – dating or married – for about 25 of the 69 or 75 years of their existence. (Ollie’s been around since 1941. Dinah since 1947.)  Indeed, the two have only met twice since the creation of The New 52 universe and one of those moments was a fleeting glance the two exchanged during DC Rebirth #1.

The last time Green Arrow and Black Canary were united is not fondly remembered by the majority of their fans. The two were hurriedly married in 2007, partly as an attempt to win back the long-time readers leaving the Green Arrow book in droves and partly as a scheme to replicate the success of the previous year’s wedding of Black Panther and Storm.

The resulting series – Green Arrow/Black Canary – felt incredibly forced to a generation of Black Canary fans who became familiar with the character as written in Dwayne McDuffie’s Justice League and Gail Simone’s Birds of Prey. They were ill-pleased to see Dinah Lance playing second-fiddle and third-billing in a series of stories where Batman had more lines than she did! Green Arrow fans weren’t much happier about Oliver Queen – once the model of chivalry – being written as “a horndog who chases skirts and can’t stay faithful,” to quote Green Arrow/Black Canary writer Judd Winick.

For this reason, there has been considerable nervous tension among fans of both Oliver Queen and Dinah Lance regarding Green Arrow: Rebirth #1. Little was said about the book in the previews beyond the fact that Black Canary would be a reoccurring character and that Green Arrow would once again sport his famous goatee. As if that was all that would be required to win fan approval!

Thankfully, Green Arrow: Rebirth #1 does have more to offer than that. 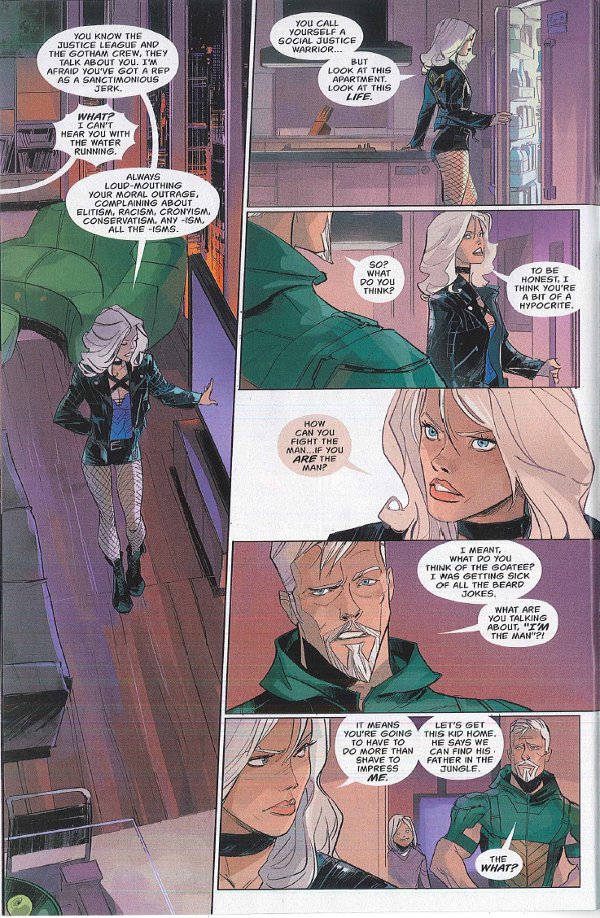 This first issue opens with Black Canary newly arrived in Seattle and stumbling across a homeless child trying to find their missing mother. At the same time, Green Arrow is hunting those responsible for kidnapping women and children off the streets. The two meet, butt-heads and Han & Leia squabbling ensues as they move to take on the human-trafficking ring responsible for the abductions.

Benjamin Percy’s script subtly establishes that these are still The New 52 versions of the characters, with Ollie mentioning his absent half-sister and Dinah’s status as a homeless youth turned famous rock star confirmed. The dialogue, however, is pure vintage Green Arrow and Black Canary. And their action scenes together are reminiscent of the best team-up stories of yesteryear.

Sadly, the script is not flawless. While Black Canary is largely well-written, her early dialogue briefly turns her into the generic romantic interest meant to change Oliver Queen into a better man. And it’s somewhat worrisome to think that Oliver Queen – a character who is synonymous with the idea of redemption and making up for the sins of the past by becoming someone better through sheer force of will – is only changing so that he can impress the Manic Pixie Dream Girl.

Thankfully, these scenes are few and finished early on. Once the plot kicks into overdrive, we see two competent heroes working together, with no suggestion that either one of them is the sidekick or the inferior. And the final page is sure to bring a smile to long-time fans of both characters. 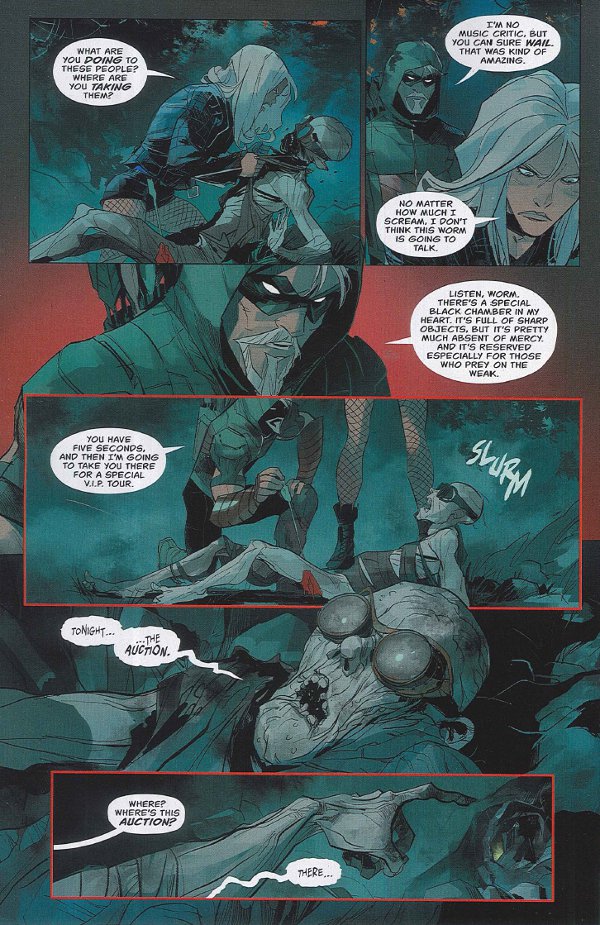 The art by Otto Schmidt is amazing. Schmidt sports a sketchy style that well-suits the dark world of Percy’s Seattle. The inks are surprisingly light, with most of the shading occurring in the coloration. This gives the book a unique aesthetic, resembling nothing so much as a gritty watercolor!

Green Arrow: Rebirth is everything Green Arrow fans have been wishing for. Black Canary fans will be pleased to see that Dinah Drake has not been turned into a damsel in distress or a “plus one” for the sake of making Green Arrow look better. It isn’t perfect but it is a good first step in the right direction after years of erratic treatment for both heroes. And as far as the DC Rebirth line in general goes, this is an encouraging first step.