Forcibly regenerated into a new body and exiled to the planet Earth in the 1970s (or was it the 1980s?), the renegade Time Lord known as The Doctor had a rather rough time of it starting the life of his Third incarnation. The knowledge of how to pilot his TARDIS – the fantastic ship capable of traveling anywhere in time and space – was psychically taken from him. And lest he be reckless enough to try and pilot it despite this, The Doctor’s TARDIS had certain key components removed that rendered it unable to travel!

Thankfully, Fate put an ill and injured Doctor into the care of an old ally – Brigadier Alistair Gordon Lethbridge-Stewart. The UK Commander of the military group known as UNIT, The Brigadier was charged with defending the Earth from alien menaces – a duty The Doctor had assisted him with once in his Second incarnation. After The Doctor once again proved his worth, a bargain was reached – in exchange for a laboratory, materials and a modest expense account, The Doctor would act as UNIT’s scientific adviser.

Now, with the aid of his lab assistant Jo Grant, “Dr. John Smith” has become UNIT’s foremost agent in dealing with the unusual. He serves as both scientist and diplomat as needed. And while the dandily-dressed Doctor considers himself a man of peace and culture, he’s always ready to step in with some Venusian Karate when necessary.

Recently, an adventure with his first two incarnations at The Time Lords’ prompting earned The Doctor a pardon of sorts. His TARDIS has been fully restored, as has his knowledge of how to pilot it. Yet as eager as he is to see the wonders of the universe once again, The Doctor still has responsibilities on Earth. And The Doctor’s greatest enemy – the Time Lord known as The Master – is still at large and closer than The Doctor thinks… 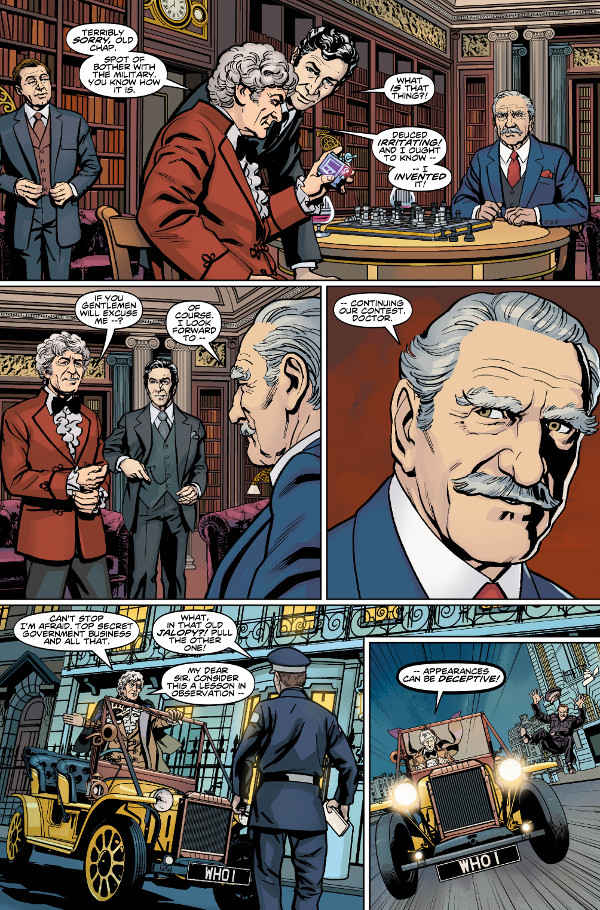 Based on this first issue, Doctor Who: The Third Doctor is Titan Comics‘ finest Doctor Who book to date! Paul Cornell’s script perfectly captures the spirit of the Jon Pertwee era, in terms of both dialogue and plotting. Christopher Jones’ artwork finds the perfect balance between photo-realism in caricaturing The Doctor, Jo Grant, The Brigadier and all the various UNIT regulars and depicting the near-cartoonish visual slapstick common to The Third Doctor’s adventures.  Every panel looks astounding, thanks to Hi-Fi’s colors. Even the lettering by Richard Starkings and Jimmy Beatencourt seems larger than life!  If you haven’t ever read a Doctor Who comic before, this is the one to start with.

Doctor Who: The Third Doctor #1 will be available for purchase on September 14, 2016 from your local comic book store (Don’t know where that is? Here you go.) or digitally via Comixology.com.