The Man Of Steel. The Amazon Princess. The Dark Knight. Together, this Trinity makes up the World’s Finest heroes. Yet recent events have changed that partnership forever!

Superman is dead and his death heralded the arrival of a different Superman. An older, more experienced Superman from another universe, who had worked in secret for years so as not to step on the toes of his younger counterpart. Reluctantly, he revealed himself to the world at large… because the world still needs a Superman.

This was, to put it mildly, awkward for Wonder Woman and Batman. It was strange for Diana – already distracted by revelations regarding the truth of her origins – to be confronted with another version of the man she once loved. And one with a wife and son, no less!

This son of Superman is also a concern to Bruce Wayne, who has his own strong opinions regarding the raising of children and the dangers of unchecked power. Never the personable sort, Bruce is also uncomfortable dealing with a Superman who knows all of his secrets while having a history and origin that Bruce cannot verify independently. And then there’s the stories this Clark Kent shares about HIS Bruce Wayne, seeming to forget that they are not the same man…

It’s no easier for the new Clark Kent, who has kept his distance from this younger Wonder Woman and Batman outside of work hours. It is strange for him to work with two people who remind him so much of his closest friends yet are so very different from the people he knew in his home universe. Still, as uncomfortable as they all are, they will endure something even more trying than the fires of Apokolips at Lois Lane’s prompting – a perfectly ordinary dinner party. 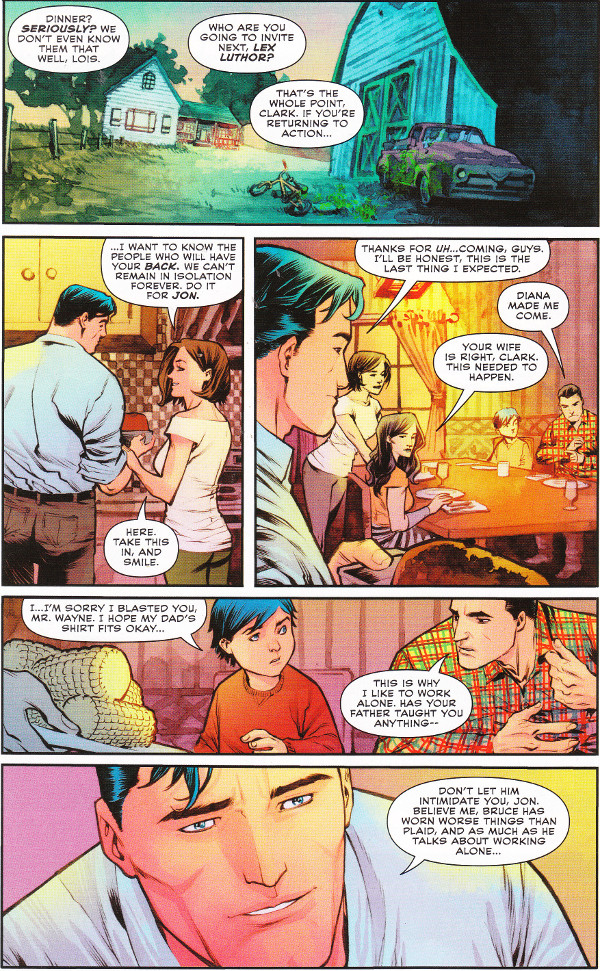 There’s little action in Trinity #1. Francis Manapul’s focus here is on establishing the status quo in the wake of numerous changes regarding the titular trinity. Given the state of the various Superman, Batman and Wonder Woman story-lines in the wake of DC Rebirth, this proves a wise choice. Batman receives the least development in this regard, but it’s a bit hard to draw a continuity line between the various Bat-Titles at this time.

It’s worth noting that Manapul’s script avoids existence as a mere information dump, focusing firmly on the relationships between characters even as we’re informed of Diana’s exile from Olympus and Clark’s efforts to establish himself to a distrustful public. There’s many brilliant moments here, from Clark and Bruce having a conversation as fathers rather than colleagues to Diana and Lois bonding over how out-of-place they feel, but for completely different reasons. 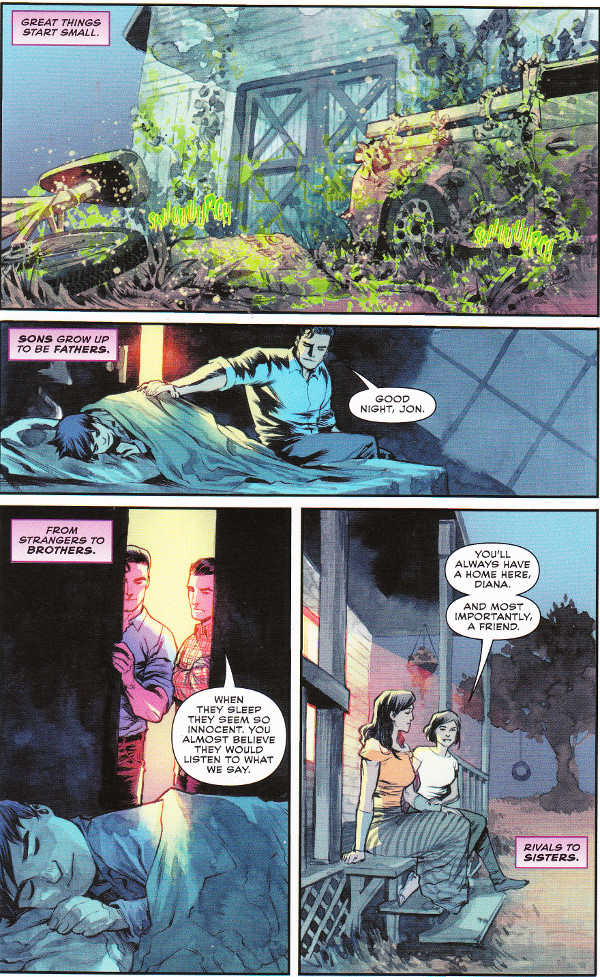 Unsurprisingly, Manapul’s artwork is equally elegant. The whole of Trinity #1 makes a case for more American comics spurning the assembly-line method of creation in favor of a single writer/artist overseeing most aspects of a book’s creation. The only real flaw is that despite the wonderful character moments there is little weight to the story. Still, there is more than enough here to justify optimism for the future of this series and a cliffhanger that promises more action to come.