The past few weeks have brought a number of changes into the life of Barry Allen (a.k.a. The Flash). He found himself thrust into the role of teacher after an experiment by  scientists backed by The Black Hole criminal syndicate created a storm of Speed Force that granted super-speed to a number of unwitting Central City citizens, including his best friend at work, Detective August Heart. He found himself with a new girlfriend as love blossomed between himself and Dr. Meena Dhawan of STAR Labs, who had also been empowered by The Speed Force Storm. And he found himself with a new enemy – a sinister speedster dubbed Godspeed, who seemed to be targeting inexperienced new speedsters and killing them so that he could steal their powers and boost his own velocity.

Now, Godspeed is the fastest man alive! He seems to have killed Meena, though Barry hopes the lack of a body means she may have retreated into The Speed Force. He has not had the chance to search for her, however, due to Barry learning a number of startling secrets.

The first is that Wally West – the teenage nephew of his friend Iris – has also developed a connection to The Speed Force and that he had it before The Speed Force Storm. The second is that Meena had been training Wally in using his powers in secret. Finally, Barry has learned Godspeed’s secret identity! 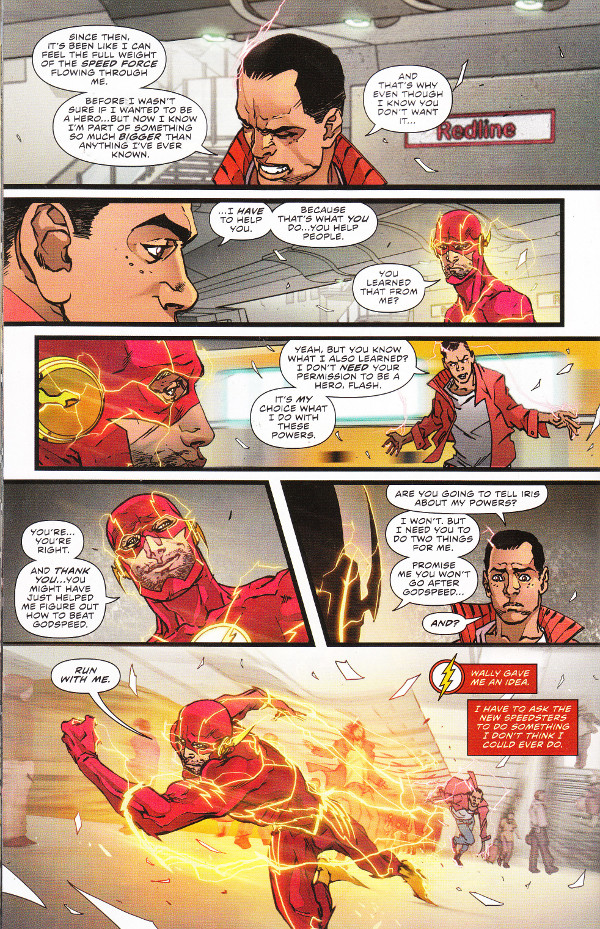 The variant cover of this issue by Dave Johnson is something of a lie, though it is a wonderful image. Symbolically, it is fitting as Wally West seems to be taking his first steps to becoming Kid Flash, though he does not don a costume in this issue. The scene in which he tells The Flash that he intends to go after Godspeed – not to avenge Meena’s apparent death but because it’s the right thing to do – is a powerful piece of writing and one of Joshua Williamson’s best moments to date.

It’s ironic that Wally’s development into Kid Flash has been so slow giving the breakneck pace of the last few issues. The story of how Barry found a new partner, a new girlfriend and a whole team of speedsters has gone by incredibly quickly even ignoring this title’s bimonthly shipping schedule.  Despite the plot being somewhat rushed, Williamson has still found time to inject a number of brilliant character moments into the narrative showcasing that Barry’s greatest power is his sense of compassion.

The artwork by Carmine Di Giandomenico seems equally rushed but less enjoyable. While Di Giandomenico’s kinetic style is a good fit for this book’s action sequences, it’s sketchy nature looks off-putting in the slower scenes where characters are merely talking instead of running. This is particularly apparent in the scenes between Barry and Wally in the middle of the book, where Wally’s expressions and poses suggest that he’s in the throes of an epileptic fit.  Thankfully, this doesn’t distract from the overall experience but it still looks incredibly odd.

Overall, this is a solid issue of The Flash but not a great one. The script is strong and it’s good to see the Wally West subplot finally developing some momentum. Yet the artwork is oddly forced and looks unnatural at times, but it’s nothing longtime fans of the character will find themselves unable to work through.