At first glance Kara Danvers is an ordinary All-American girl. She’s on her high-school’s track team, though she’s not a star-athlete. (The star athlete is her best friend, Jennifer.) Kara is politically aware but she’s no rabble-rouser. (That would be her other best friend, Dolly.)

Kara is embarrassed by her dad, worried about fitting-in and confused about her body as her sixteenth birthday approaches. All perfectly normal things for a teenage girl.

Kara can also lift tractors over her head and fly.

Kara doesn’t know much about girls becoming women but she is fairly certain THAT isn’t normal.

Neither is having no memories of before you were eight-years-old or having been found in a rocket that your parents keep hidden out in their old barn. And popping a zit and releasing a green, slimy substance that takes three hours to clean off the bathroom wall is pretty much the definition of “not normal”.

And then there’s the dream. The same dream every night. The one Kara has a feeling would tell her who she is and where she came from if only she could remember more beyond brief flashes of light and sudden sensations of being all alone… 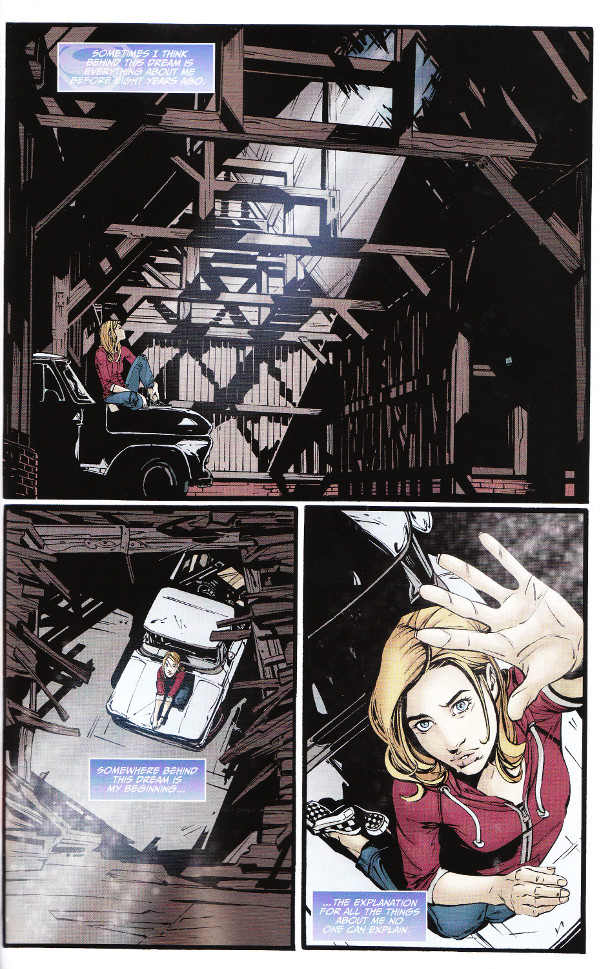 Many stories have played with the concept of super-powers as a metaphor for puberty. Other stories have drawn parallels between the awkwardness and feelings of isolation that are frequently a part of adolescence and the emotional state of unusual characters -aliens, witches and the like – who feel as if they do not belong to a society that requires them to hide who they are. For what my money is worth, none of those stories have ever tackled the concept as honestly or truthfully as Supergirl: Being Super.

The script by Printz Award Winner Mariko Tamaki reads like a collaboration between Sterling Gates and Judy Blume. There’s no superheroic action and barely any signs of Kara being super-powered. The focus in this first issue is on developing Kara’s world, her personality and her relationships with the people around her. In this respect, Supergirl: Being Super resembles a Shojo manga more than a traditional American superhero comic.

The artwork further aids this Shojo aesthetic. Joëlle Jones does a fantastic job of creating unique, memorable character designs and there are a variety of body-types and age-ranges on display. Kara herself looks like a real teenage girl – fair faced but still growing into the woman she will be one day. Colorist Sandu Florea further hints at Kara’s destiny, with most of her clothing sporting a red/blue color scheme. This is most apparent in Kara’s track uniform, which almost appears to be an odd variant of the belly-baring Supergirl costume of the mid-2000s.

Based on this first issue, Supergirl: Being Super might not be everyone’s cup of tea. The focus on character over action may turn away some readers. Those who have been looking for a good comic to give the super girls in their lives who love the Supergirl TV series, however, will find this series to be a welcome treat.