Once upon at time, Lucifer quit his job as Prince of Hell and opened a piano bar in Los Angeles. He went on to build a universe of his own, entrusting it to a trustworthy (if not entirely willing) young deity and went off to wander the universe, free from all responsibility.

Then Lucifer returned and all Hell broke loose. Quite literally, for once.

God also returned to the universe of His creation, reborn as a vengeful deity determined to eliminate Free Will from the fabric of existence.  Now angels and demons alike serve the new Lord, who further seeks the favor of Takehiko – bastard son of Lucifer and the Japanese death goddess Izanami. Takehiko seeks only his father’s destruction and possess power enough to bring it about.

With his options limited and his allies few, Lucifer must come up with a plan to do the impossible and kill God.  As his lover and general Mazikeen returns to Hell to see what forces and powers may be gathered there, Lucifer seeks the help of a cunning mortal – a trench-coat clad magus who smokes like a chimney and curses like a sailor.

No. Not that one. 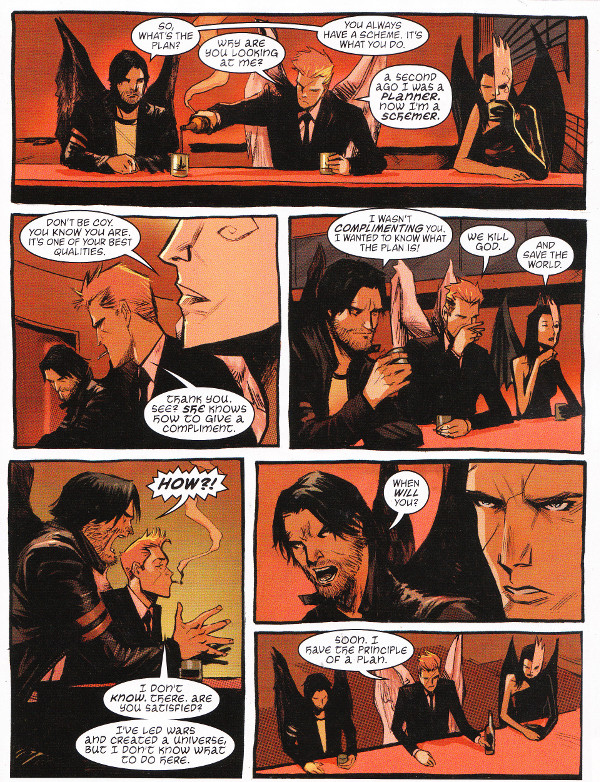 Lucifer #14 is the first issue by new writer Richard Kadrey but you’d never know it from reading it. Kadrey has continued on from precisely where Holly Black left off, showing a wonderful grasp of the core characters in the process.  The action of this issue largely focuses on Lucifer and Mazikeen, with brief appearances by most of the existing supporting cast establishing the battle-lines for the war to come.

This proves both a blessing and a curse to the story at hand. Fans of Black’s run to date will be reassured that Kadrey can match her in quality. New readers, unfortunately, will not find this issue at all accommodating, despite Vertigo promoting it as “the time to get on board“.

To note one problem, the script does not identify the character of Rosemary (Takehiko’s girlfriend in life, now a ghost in Hell) by name, despite her having a fair bit of dialogue. While it’s believable that none of the gods and monsters with whom Rosemary interacts would give a damn about her name, it would benefit the readers to hear it at least once!

The character of Arabelle Crane poses a different sort of problem. Clearly she’s been created as an expy for John Constantine, but to what end is anybody’s guess. Does DC Comics have the rights to John sewn up so tight that he can’t sneak off into the Vertigo universe to curse and shag when the mood takes him? Is this some joke on the part of the creative team? Or is this a cosmic joke that will end with Ol’ ConJob showing up to retrieve his long-lost anima before buggering off for parts unknown?  I don’t know but the character has got my attention if nothing else, concerned as I may be about the implications.

I have no qualms, however, about the artwork for this issue. Lee Garbett’s dark, angular style is as entrancing as it was in the first issue of this series. Todd Klein’s lettering is as gorgeous as always. And the colors of Antonio Fabela utilize a different color palette for each setting, offering a variety of visual moods as we progress from scene to scene. Rich reds denote Lucifer’s club, Lux. Cool blues and purples depict the cruel emptiness of Hell. Deep, dark grays symbolize the tarnish of the Silver City of Heaven under the command of the new dark God.

Lucifer #14 may not be the ideal entry point that it was promoted as but it is still a fine book. The story is gripping and it reestablishes the status quo which the rest of the series can build on expertly. The artwork looks just plain amazing. Truly, the only flaw with this book is that you have to have read Neil Gaiman’s The Sandman, Mike Carey’s Lucifer and Garth Ennis’ Hellblazer to truly appreciate the story. Old-school Vertigo fans will love it, though.