Five years ago on another Earth, The Joker hatched a plot to see if he could drive Superman mad with “one bad day”. His prank – which ended in the destruction of Metropolis and the death of Lois Lane and her unborn child – also ended with The Joker’s last laugh coming as Superman plunged a fist raised in anger through The Joker’s chest.

Over the next five years, Superman would slide down a slippery slope, reaching lower and lower depths in his quest to save humanity from itself. He fought the Guardians of the Universe, the magicians of Earth – even the gods of the Ancient Greece! Yet one foe gave him more trouble and proved more elusive than every other enemy put together – Batman!

In desperation, having lost too many friends and allies in the war with what became known as The Regime, Batman turned to The Justice League of another Earth, summoning the help he needed from a time just before The Joker of their world launched a similar scheme to blow up Metropolis. And yet, as the heroes battled like the gods of old in the skies above, something as stunning and unexpected as Superman becoming a tyrant occurred while no one was looking.

Now, the final battle is being fought as the tyrant Superman faces his younger, purer self And Harley Quinn – now leader of a team of ordinary people fighting for the common good – heads off for a final confrontation with The Joker of the other world, who tried to turn her back into the woman she once was. 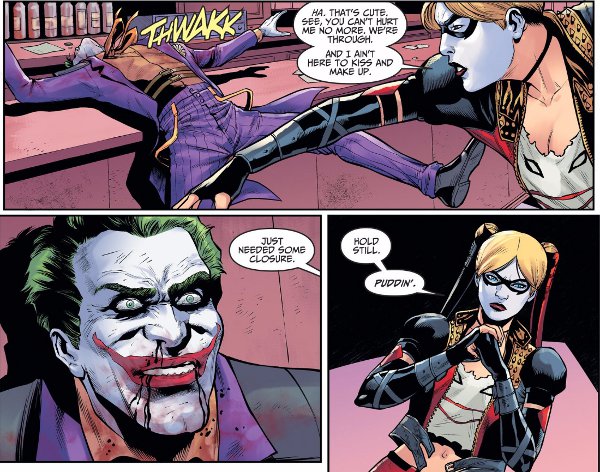 I’ve spoken before about how the original Injustice comic took everyone by surprise. Once dismissed by purists who decried the idea of Superman ever being corrupted, the comic came to be heralded by some as the last vestige of the classic DC Comics Universe in the wake of The New 52 reboot.  Fans who missed the classic interpretations of various characters latched onto Injustice for that reason alone, even before it became apparent that Tom Taylor and Brian Buccellato had no interest in writing a mere video game tie-in book and had crafted something infinitely more complex.

Injustice: Ground Zero had a more difficult task. The original Injustice comic filled in the blanks in a period of time that was unexplored by the story of the video game before a few vague details. Here, Christopher Sebela had to work within the story of the game while spinning the tale of how Harley Quinn found herself – “Like Eat Pray Love but with more punching,” as Harley herself quipped. Sebela accomplished this by having Harley narrate the events of the game in her own inimitable fashion, which kept the known events interesting between the scenes of new material.

The story has taken on an unintended resonance in recent months, with Harley’s transformation coming alongside her taking an unorganized group of the disenfranchised masses and turning them into a group that can actively fight against oppression and help people. Of course, as Harley notes, “sometimes you gotta punch a fascist.” Sebela doesn’t hit the reader over the head with this point but the message is clear. And the ending – in which we see to whom Harley has been narrating the whole story – is fitting and funny!

The artwork in this final issue brings back two of the series’ best artists – Tom Derenick (Secret Six) and Daniel Sampere (Batgirl, Arrow: The Dark Archer). They each tackle precisely half of the issue, with inker Juan Albarran inking the second half of the story and colorist J. Nanjan handling the whole book. The artwork looks fantastic and is a credit to everyone involved. I look forward to seeing what these artists do in the future.

Injustice: Ground Zero #24 is a worthy ending to a wonderful series. We haven’t seen the end of the Injustice reality, thankfully. A sequel to the original game will be coming out in two months time and with it a new comic, written by Tom Taylor.  The future of Injustice may be a dark place but the future for the fans of this series is bright indeed!