I’ve written before about the troubled history of Sheena: Queen of The Jungle. Despite being the first superheroine to warrant her own monthly comic, her own television series and her own feature-length film, the character has languished in relative obscurity in the media which birthed her for the better part of a century. Even after undergoing a spiritual rebirth in 2007, which was overseen by no less a personage than Die Hard screenwriter Stephen E. De Souza, Sheena has still spent the last decade playing second-fiddle to her many imitators.

I had hoped with the rights to the character having been picked up by Dynamite Entertainment that The One True Queen of The Jungle might finally be given a chance to shine on her own. Unfortunately, this preview issue does little to justify my optimism. While still an improvement on Sheena’s first appearance in a Dynamite comic (i.e. last year’s truly awful Lords Of The Jungle), this issue reminded me of the recent Red Sonja revamp for all the wrong reasons.

There’s little explanation of Sheena’s backstory here, apart from a blurb on the title page which confirms that this series is set in the fictional South American nation of Val Verde from the 2007 reboot.  The plot is minimal, focused on Sheena’s efforts to retrieve the drone that she shot down from a forbidden temple, deciding it a lesser sin for her to set foot on sacred ground than to leave an outsider’s artifact to taint it. 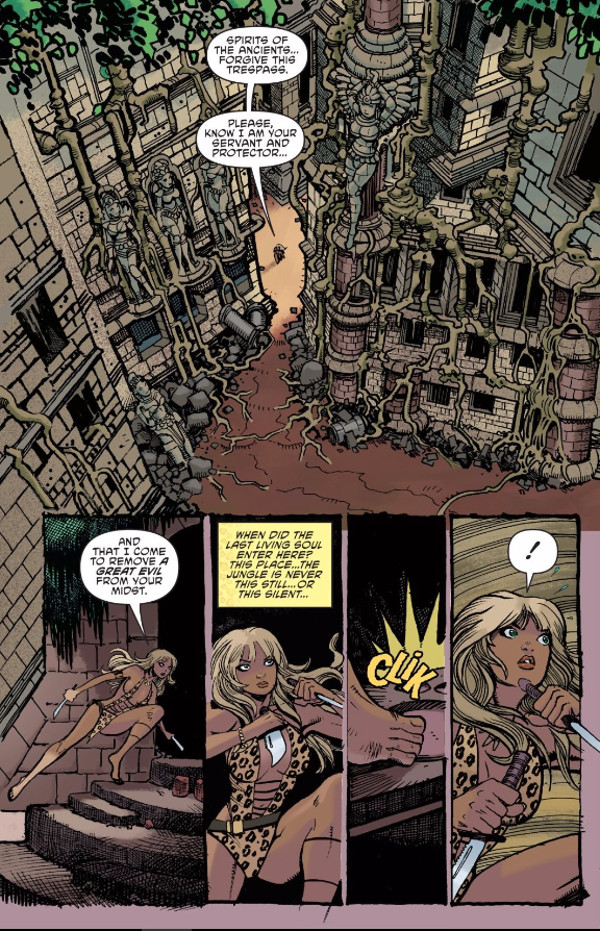 I make comparison to this year’s Red Sonja revamp not only because both series started off with a 25 cent preview but because both books paired writers I love with artists I loathe. I first pointed out Moritat’s poor grasp of visual continuity in my review of his work on Hellblazer and this problem continues into his work on Sheena. Moritat is unable to decide if Sheena’s costume has a bikini-bottom, a short skirt or a breech-cloth and her costume changes throughout the issue – frequently between panels, as above! I will give Moritat this much credit – his Sheena looks far more imposing that Robert Castro’s Red Sonja.

Despite the issues with the art, I still found myself enjoying the story immensely. The script by Marguerite Bennett and Christina Trujillo works past its standard plot to establish Sheena’s personality, if not her backstory, for new readers. Sheena is quickly established as the sort of person who is quick to act but possesses enough of a sense of responsibility to correct her mistakes. I’m not quite sure what to make of the final page but this preview has done enough to convince me to give the first issue a shot. I just hope the editors at Dynamite Entertainment see fit to let Emanuela Lupacchino, who drew the excellent cover for this issue. handle the interiors at some point in the future.