Atlantis has sealed itself off from the rest of the world. An impenetrable reef – The Crown Of Thorns – now surrounds the sunken city, keeping those within from escaping and those without from entering. Such is the will of Corum Rath – the new King of Atlantis!

Rath’s reign to date has been far from peaceful. The noble families rankle at being asked to surrender all of their magical artifacts to the new order. The commoners live in fear Rath’s personal guard, assigned to root out any signs of disloyalty to his regime.  Even The Ninth Tride – the lowest point in Atlantis, where those changed by years of depth-living have mutated to resemble sea-life live – suffers under the rule of the crime-lord Krush.

Atlantis is not without hope, however. Arthur Curry – the man known as Aquaman – still lives within The Ninth Tride and Atlantis has other heroes as well. As Aquaman’s fiancee, Mera, seeks out their former companion, Garth of Atlantis, in the surface world and his former advisor Vulko finds an unexpected ally within Atlantis itself, Aquaman and his new follower, the girl known as Dolphin, must escape the clutches of Krush! 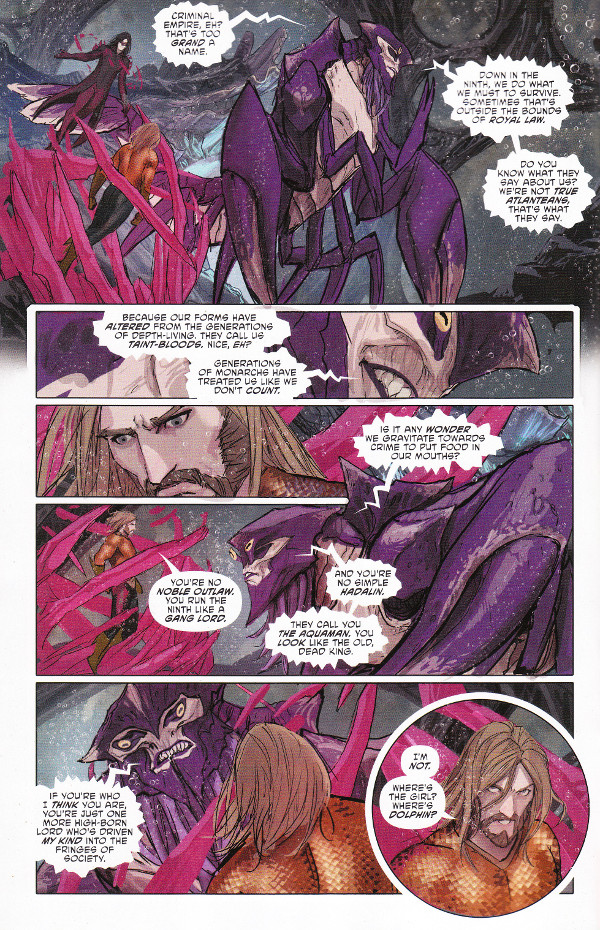 Aquaman continues to be one of the best books in the Rebirth line. The stories are as rich and lively as the artwork, which has never looked so spectacular as it has under Stjepan Sejic. I’m not certain if the book’s recent delays are due to Sejic’s detail-intensive style but, if that is the case, this book has proven worth the wait. So long as this level of quality is maintained, I could live with Aquaman only being published once a month.

Dan Abnett has built upon the original mythology of Atlantis and its related characters in the DC Universe beautifully and strengthened the bonds between these characters which were sundered in the wake of The New 52. Of particular note is the interplay between Garth (a.k.a. Tempest) and Mera. This series is a must-read comic for any fan of the medium.