An unknown twist of fate has caused Cason Ray Bennett and Juniper Elanore Blue to switch bodies. The two of them couldn’t be any more different. Cason is a man’s man – a “problem-solver” for “The Outfit” in Chicago. Juniper is a wallflower – a housewife and step-mom in Washington State. He’s a Man Of Respect. She gets no respect.

Now, Juniper finds herself in a nightmare straight from the pages of the true-crime novels that are the only escape from the suburban Hell that is her life. She’s trapped in a hotel room with one of Cason’s idiot associates, who botched a hit and The Feds are closing in. The good news is her experience cleaning a house with no help from her husband and stepson allowed her to clean the crime-scene like a pro. The bad news is her only competent ally in getting out of this mess – another problem-solver named Cruz – just discovered Cason was screwing his girlfriend.

Cason, in contrast, is having the time of his life. Putting a sassy stepson in his place is a piece of cake for a guy who handles East Side thugs on a regular basis. And fixing dinner on two hour’s notice for Juniper’s husband’s demanding boss is practically a vacation. 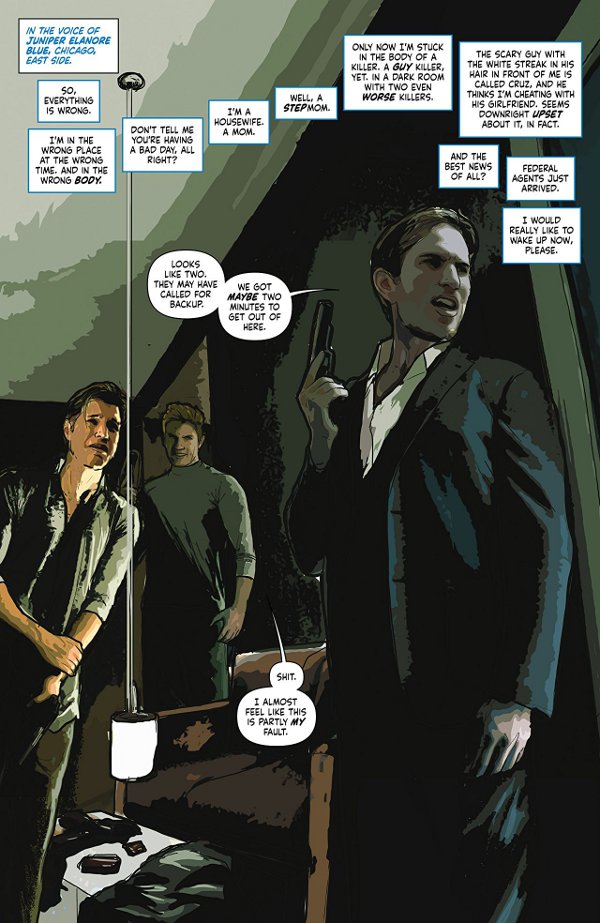 Mix Freaky Friday with My Blue Heaven and you might wind up with something as gleefully demented as Crosswind. Twisted stories like this are Gail Simone’s bread and butter and the humor and horror of the situations our protagonists endure are mined with the enthusiasm of a grizzled old prospector who just spied a glint among the rocks.

What makes this story truly remarkable is how Simone refuses to fall back on sexist tropes. A lesser writer would have Cason prove utterly helpless in the kitchen and proceed to guffaw about how men can’t do anything right in a domestic setting. Here, Cason proves a whiz-kid in the kitchen and is more than capable of handling the bullies who terrify Juniper and her stepson. 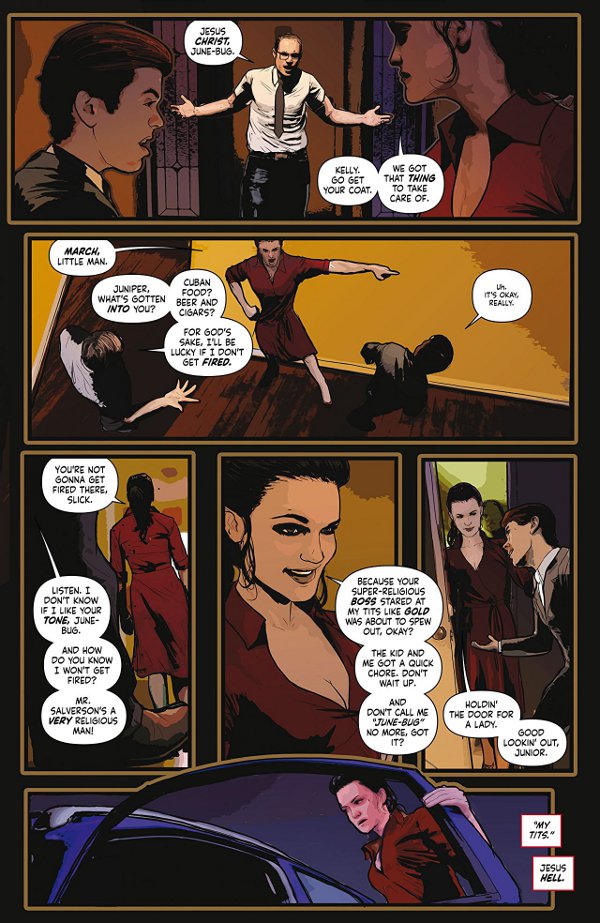 Cat Staggs proves the perfect artistic partner for Simone. Stagg’s neo-Noir style is a good fit for the tone of the story but the depth of the artwork goes beyond that. Stagg’s gift for portraying body language is what sells this book, with Juniper in Cason’s body and Cason in Juniper’s body both visibly carrying themselves in ways that reveal their personalities. This further adds to the humor in some scenes, as “Cason” is seen from the perspective of other characters playing at a housewife’s idea of a tough guy before blowing it and being visibly panicked.

Crosswind continues to be one entertaining book. The script offers up a fresh twist on the old body-swapping story. The artwork is simply amazing. This book should be on the short-list for every graphic novel award in existence.