Ridley Scott’s Blade Runner is considered a masterpiece by many – an influential achievement that went on to influence other movies such as Akira, Gattaca and The Fifth Element in its sleek futuristic style and look.  It is a science fiction film noir that presents one of the best monologues in history, courtesy of actor Rutger Hauer. It is studied in film schools today and is seen as the pinnacle of science fiction in cinema.

Unsurprisingly, a film held to this degree of reverence inspired many to scream, “It does not need a sequel!” However, the protests of outraged art-house aficionados didn’t stop Warner Brothers from considering the idea and now we have that sequel with Blade Runner 2049.

I won’t beat around the bush here, folks: The sequel is good. REALLY good. In fact, I will go as far as to say I think it is better than the original film. A bold statement, I know, but I stand by my decree.

To review this film properly requires revealing spoilers. While this film clocks in at a whopping two hours and 43 minutes, a lot happens. It has an expansive plot that not only expands the mythos of the world Philip K. Dick created in Do Androids Dream Of Electric Sheep?, but answers every single question that the original Ridley Scott film left us. And then some.

Set in the year 2049, hence the title, the Replicants of 2019 are virtually extinct. A new breed of Replicants, created by Niander Wallace (Jared Leto), are more sophisticated, obeying all orders without question. Despite their pre-programmed four-year lifespan, some of the old Replicants have survived thanks to upgrades that prolonged their lives and special police officers called Blade Runners are still needed to hunt them down.

K (Ryan Gosling) is one of these Blade Runners, tasked with “retiring” the last remaining Replicants at any cost. His profession is not a popular one among either humans or new Replicants, who call him by a futuristic racial slur – “skinner”. Indeed, the best relationship K has is with the holographic housewife named Joi (brilliantly played by Ana de Armas) who shares his tiny apartment. It is K who is tasked with stopping an event that threatens to change the world forever, leading to him being hunted by both humans and Replicants alike and eventually crossing paths with Rick Deckard (Harrison Ford). 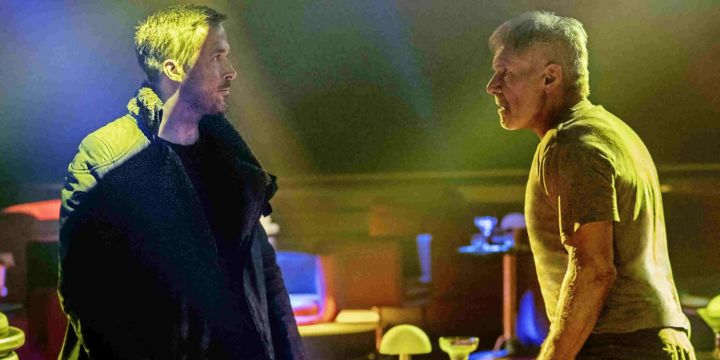 While both Gosling and Ford do a good job in their respected roles and the film boasts an amazing ensemble cast, the real stars in this film are not the actors. Much like the original film, Blade Runner 2049 is more about a world than the people who inhabit it. Hampton Fancher and Michael Green have crafted a thoughtful screenplay but beyond even the writing lies the incredible look of the film itself.

The special effects in this movie are some of the best I have ever seen, especially the ones used to bring Joi to life.  The art direction not only does an excellent job mirroring the aesthetic of the original film but it expands on it perfectly to show the passage of time within that universe. There are several nods to the original film, but not to the point where they go all “Member Berries” with it.

Despite all that excellence, the big star here is director Denis Villeneuve. His previous films Prisoners, Sicario and Arrival were all great films and they paved the way to this opportunity of a lifetime. Villeneuve grabbed the reigns of a project that many felt was impossible and made it more than possible – he made one of the best films of 2017 and an instant masterpiece of science fiction cinema.