Frank Castle was a good man, a loving father and a highly decorated Marine. Then his family was caught in the crossfire of a brutal mob shoot-out. The good man and loving father died that day but the Marine lived on as a vigilante and a violent force of retribution for criminals everywhere.

Frank Castle is dead. All that remains is The Punisher.

During the time when America was ruled by HYDRA’s Secret Empire, The Punisher was approached by a fake Captain America about serving his country once again in secret. Armed with an old set of War Machine armor, The Punisher unknowingly did the bidding of HYDRA.

The Punisher tried to kill the false Steve Rogers and has lost the armor, but his need to atone for his crimes still remains, as does his newfound taste for bigger game than common criminals. Because the fascist threat of HYDRA still remains. And even now Baron Zemo and a new partner are seeking to reorganize HYDRA behind the government of an allegedly reformed Bagalia, which is on the verge of official recognition by the United Nations.

Seems the perfect time for The Punisher to go to war… 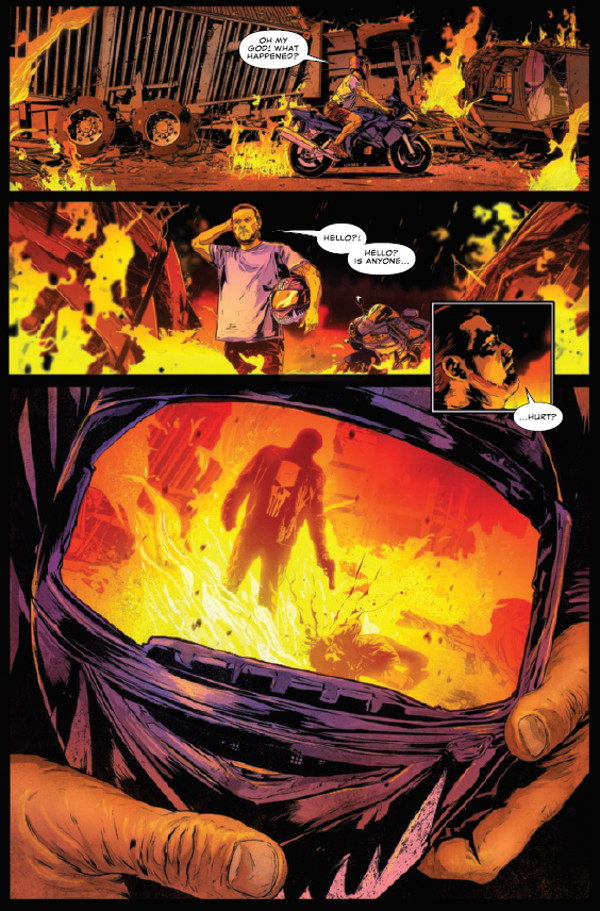 There are two ways in which a writer can handle The Punisher. One is to focus upon the man behind the skull-shirt, with lengthy internal monologues and musings upon the nature of war and violence. The other is to present The Punisher as a force of nature, like Jason, Michael Meyers or any other seemingly invincible horror movie monster.

Writer Matt Rosenberg takes the later tactic in this new Punisher series and it is incredibly effective. I’ve never been much for the strong, silent type when it comes to my comic book heroes, but I can’t deny that Rosenberg makes The Punisher into an engaging figure despite his lack of dialogue. Frank Castle barely says more than half a dozen words  in this issue and all of them, save the phrase “You know who I am,” are spoken to himself. When The Punisher is on the page, the story is told through his actions.

These actions are gloriously illustrated by Szymon Kudranski and if ever there was an artist born to illustrate The Punisher, it is him. Kudranski’s sports a gritty, realistic style which is still fondly remembered by those who remember his work on the Arrow comic book series. The burden of conveying Frank’s character falls entirely upon Kudranski, but he proves capable of carrying it. The color art of Antonio Fabela offers up the perfect finishes to Kudranski’s pencils and inks. leaving behind images that seem to have been taken directly from the set of a wild action movie.

Those who like their Frank Castle to be a silent sentinel and a creature of nightmare will love this new Punisher series. Rosenberg is able to spin his story through the other characters in this issue, leaving Kudranski to handle developing Frank Castle’s personality through the artwork. All of this builds to a fantastic cliff-hanger that promises big changes for the Marvel Universe as a whole and a strong future for this series.