To many die-hard horror fans, the name of Charles Band brings up waves of nostalgia. This shameless man made over 300 horror and science fiction movies – some of which became huge cult classics, like The Evil Bong, Laserblast and Robot Jox. Yet if there is one series for which he will always be famous, it is Puppet Master.

The original film was released direct to home-video in 1989 and spawned an 12-film franchise centered upon a puppeteer named Toulon, who used an Ancient Egyptian spell to bring murderous puppets to life to fight Nazis. The series was a big money-maker for Band’s studio, Full Moon Pictures. Now, Band has allowed indy studio Cinestate to reboot the franchise in a leaner, meaner and more exploitative direction with Puppet Master: The Littlest Reich.

The first big change is in the character Toulon himself. Originally a Frenchman who learned the spell to bring life to puppets to avenge those who wronged him and kill off Nazis, Toulon (played brilliantly by horror veteran and mad scientist character actor extraordinaire Udo Kier) is now half-French and half-German. At the start of WWII, Toulon denounces his French heritage and goes to work for Adolf Hitler, creating an army of puppets that lure their victims (i.e. Jewish people, the LGBT and people of color) to their deaths with a puppet show that ends in their violent, grisly murders.

In short, this time the puppets are committing hate-crimes – a departure from the original films. 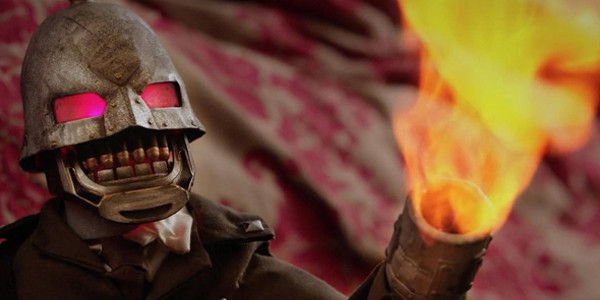 As this film opens, we see newly-divorced comic book writer Edgar (played by comedic actor Thomas Lennon) on a road trip with his new girlfriend and his boss to a convention that is themed around the 30th anniversary of the Toulon murders. Here, puppets he designed while living in both Germany and while in exile in the USA, are being auctioned off. Edgar’s dead brother managed to get his hands on one of these puppets while attending summer camp as a boy, before dying under mysterious circumstances.

At the convention, it turns out that many of the attendees who collect the puppets are either Jewish, gay or one of the other minorities who were thrown into Nazi concentration camps during WWII. I know you may be asking why, but a reason is given: as one attendee points out many Jewish people, especially Holocaust survivors, often collect Nazi memorabilia as a sign of empowerment. It is a trophy of sorts, showing that they overcame the evil that they and their families faced. This is also similar to how the LGBT have adopted the pink triangle used to tag gay Nazi prisoners as a symbol for LGBT rights.

During this convention, we learn the backstory behind the murders at a tour of Toulon’s home from Carol Doreski (Barbara Crampton) – a former police officer, who killed Toulon in 1989. The scene allows not only Crampton to shine, but also delivers a tone of uncomfortableness, as we see Nazi symbols and torture chambers. We also learn that over 64 of Toulon’s puppets are to be auctioned off to the highest bidders. What the attendees do not know is that on this, the 30th anniversary of Toulon’s death, the puppets are reactivated to kill the attendees. 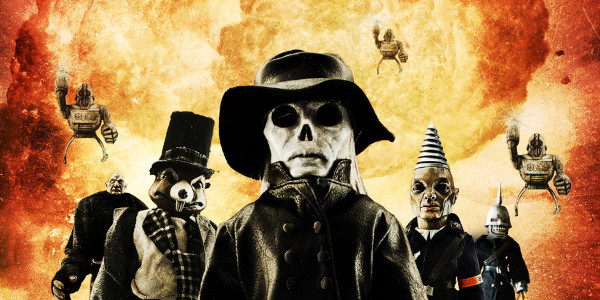 To many, the unapologetic murders in this film can be seen as extremely politically incorrect. However, in this regard the film that harkens back to the exploitation films of old, which used shocking imagery to prove a point. And the point here is simply this: these killers are Nazis. We need to be reminded of who the Nazis were, who they hated and that they would have zero issues in killing minorities without a thought.

In this aspect, the film suddenly exists as a topical social commentary, delivering a message that needs to be said in an age where fascism and Nazism have suddenly made an unwelcome return. Horror is a classic medium for both social commentary and making political statements and directors Sonny Laguna and Tommy Wiklund (along with Bone Tomahawk creator S. Craig Zahler) live up to that legacy in reminding us just how dangerous Nazis are. Sometimes, you have to go over the top to make a point, and this film definitely drives the point home in all its gory glory.

With that said, those who have sensitive constitutions may want to be aware that some of the kills in this film are extremely gory, with one involving a child and another a pregnant woman. That said, these are not the most shocking deaths in the film. I will spare you further details both in the interest of good taste and in not spoiling the movie. While the violence in this film is mean-spirited and extreme, it does not reach the levels of movies like like The Human Centipede 2. The deaths here also have a political purpose, as opposed to being gore for the sake of shock. This is a difficult film to watch, but if you are able to grit your teeth and make it through the carnage, you will be rewarded with a sick, twisted ride.

Self admitted horror nerd and homosexual. Keeper of too much useless trivia when it comes to cult cinema and films no one should even be watching in the first place. For some damn reason, actually watched From Justin To Kelly on purpose. View all posts by Roy E Buckingham