The greatest problem Doctor Who has faced in its long history is how to make itself accessible to new fans. After over fifty years, one revamp in 2005, various spin-offs and countless novels, comic books, video games, audio plays, stage shows and other assorted adaptations, it presents a rather intimidating front for newcomers.  Throw in the fact that the established fans all have their own differing opinions on where to first dig into it all, and it can be rather off-putting.

The sage Neil Gaiman (who has two Doctor Who episodes and a short story to his credit) once wrote the greatest synopsis of Doctor Who ever.

“There’s a blue box. It’s bigger on the inside than it is on the outside. It can go anywhere in time and space and sometimes even where it’s meant to go. And when it turns up, there’s a bloke in it called The Doctor and there will be stuff wrong and he will do his best to sort it out and he will probably succeed cos he’s awesome. ”

Of course even this statement requires an addendum now – “Excepting on those occasions when The Doctor is a woman, in which case she will probably succeed cos she is awesome.”

This, in turn, requires a quick discussion regarding The Doctor’s power to regenerate into a new body whenever he suffers tremendous physical distress (i.e. whenever the actor playing The Doctor leaves the role) and how The Doctor’s alien race – The Time Lords – are capable of changing genders whenever they regenerate. Suddenly the simple explanation is hardly simple and hardly explains much of anything.

Thankfully, Doctor Who: The Thirteenth Doctor #0 provides a wonderful explanation of the show’s concept and history that is easily accessible to potential Whovians. It also presents an amazing story featuring all of The Doctor’s cannon incarnations to date, as envisioned by an all-star team of artists who have worked on Titan Comics’ previous Doctor Who books.

Set during the final moments of the episode “Twice Upon A Time”, the comic continues a conversation where The Twelfth Doctor (Peter Capaldi) offers some advice to his new incarnation (Jodi Whittaker.)  This advice is delivered as The Twelfth Doctor reminiscences on his past lives and how they shaped the man he became and the woman he is becoming.

Richard Dinnick works a surprising amount of lore from the classic series into the narrative. While not all of The Doctor’s greatest enemies make an appearance, villains like The Cybermen and The Sontarans do get their names dropped. We also get to see most of The Doctor’s most popular companions in action, with The Doctor fondly remembering the likes of reporter Sarah Jane Smith and the Time Lady Romana. 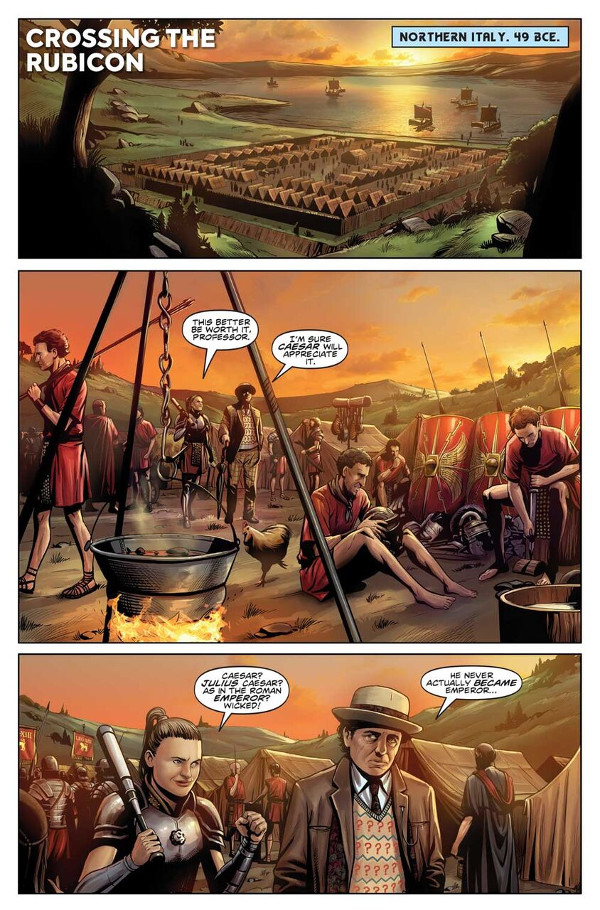 Fans of the show will be delighted by these sequences for all the various shout-outs, but Dinnick’s script also makes these stories accessible and enjoyable to newcomers. The War Doctor’s story, for instance, features Eleventh Doctor companion Dorian and details an adventure once described by The Ninth Doctor regarding how he destroyed one of the most infamous weapon factories in the universe and turned it into a banana orchard.

Dinnick’s script also pays tribute to the unique additions that Titan Comics added into the Whovian oeuvre.  The Eighth, Tenth and Eleventh Doctor segments of the story all contain companions like artist Gabby Gonzales and library library assistant Alice Obiefune, who were created specifically for the comics. The Tenth Doctor story is also notable for depicting an encounter between The Doctor and Elizabeth Garrett Anderson – the first woman in England to become a medical doctor – in a neat bit of foreshadowing that continues the issue’s theme of women doctors saving people being nothing new, even if the idea of a woman Doctor is!

The art throughout the issue is uniformly excellent. There’s not a badly drawn story in the lot and the variety of art on display is truly astonishing. Each artist has also been well-matched to their respective Doctor, with the cartoonish style of Arianna Florean proving a perfect pairing for the silly story involving the Fourth Doctor. Darker, more realistic art, is utilized for the more serious tales to grand effect.

Doctor Who: The Thirteenth Doctor #0 is everything a first issue should be. For those new to Doctor Who, it offers a warm and welcome introduction. To those coming back for more, it shows them something new and exciting. This is a wonderful introduction to the history of Doctor Who and a splendid set-up for The Thirteenth Doctor’s new solo comic book. With a fantastic script and equally amazing artwork, this book is a must-read!

Doctor Who: The Thirteenth Doctor #0 will be available on September 26, 2018.