Last week, I said that Titans would soon become “so bad, it’s funny.” After watching “Origins” it seems I was half right.

In truth, I did laugh at one part of this episode, but it was at one of the parts that wasn’t meant to be funny. This occurred as Rachel was attempting to undo her bindings in a gas station restroom and her reflection looked at her and suddenly growled, “Who’s gonna help you now, bitch?” in a voice I can’t believe wasn’t provided by Robert Englund.

The reason why Rachel was bound was due to her abduction in the last episode by a quartet of assassins who are apparently based on a rather obscure group of comic book villains called The Nuclear Family. Not that you’d know this because none of the family members are ever addressed by that name or indeed any name.

This is one of the larger problems with Titans so far – basic factoids are obscured for the sake of adding mystery to the proceedings. The problem is that there are so many mysteries and so little that we know for certain, that there is little reason to care about the mysteries as we don’t have enough information to process what we are seeing. Ironically, this was apparently done to give long-time fans of the Titans comics something new to enjoy. Yet the only way to understand most of the story so far is to already be familiar with the original comics! 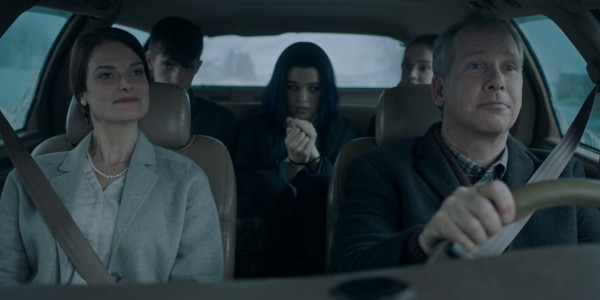 The story of “Origins” is all over the place, likely due to it having been handled by four different writers. Despite this, none of these writers felt the need to write much dialogue as the majority of the episode seems to consist of Dick Grayson and Kory Anders staring at clues or computer screens in total silence while thinking. If you’ve ever wondered why fictional detectives always seem to work in pairs, “Origins” shows you why – because two quirky investigators arguing is far more interesting than watching a solo detective think. These scenes would be funny if they weren’t so painfully dull.

Thankfully, there is one aspect of the episode that is amusing  – a series of flashbacks which show a young Dick Grayson coping with life at Wayne Manor shortly after his being taken in by Bruce Wayne. These scenes are funny purely for the rather absurd lengths the script and direction must go through in order to not have Alfred Pennyworth of Bruce Wayne show up on-screen or deliver a line from off-camera. Indeed, Bruce Wayne’s offer to help Dick find the people who killed his parents is delivered by a hand-written note. We also get a scene where a young Dick steals a car from Wayne Manor, which will make you appreciate the subtlety of the similar scene from Batman Forever, where Dick at least had the audacity to steal The Batmobile.

There is one scene which does redeem the episode, however – the magical moment when a green-haired boy named “Gar” shows up and flirts with Rachel as she’s playing pinball at a local skating rink. The scene is fun, cute and seems to have been accidentally edited into the episode after emerging from another dimension where Titans was actually good, or at least, trying to be entertaining instead of deep.