Spiders are the go-to monster in fantasy and science-fiction for many reasons. Viscerally, they are alien in appearance and horrifying in motion. Intellectually, they are one of the most efficient predators in existence in terms of both their stealth capabilities and their physical attributes. Make spiders bigger and they’d make short work of humanity through sheer numbers alone.

It is our instinctual fear of spiders that fuels much of the plot of “Arachnids in The UK.” Yet the real monster, as is usually the case in Doctor Who, turns out to be something far closer to home. There is little I can say about this point without spoiling the whole episode, so I will save that for the end and give you one more warning before I do so.

As the title suggests, giant spiders are springing up around Sheffield and The Doctor and company must figure out why. They are assisted in this endeavor by Dr. Jade – an expert on spiders who notes that the normal spiders are acting strangely – and Yaz’s mother, who is along for the ride. Getting in their way is Jack Robertson – a real estate mogul and would-be politician, whose new hotel has become Ground Zero of the giant spider invasion.

The plot involving the giant spiders is actually the least interesting aspect of the episode, being the sort of generic “monster-of-the-week” horror element one sees in episodic television.  The CGI giant spiders are decently executed and the story itself is okay, but the strongest elements of the episode are those which involve The Doctor’s new friends trying to acclimate to their old lives after three exciting adventures across time and space.

The best of these scenes involves Bradley Walsh as Graham, who returns to his empty home and finds himself haunted by the ghost of his late wife, Grace. Not literally, it should be noted, but he hears her voice and finds himself talking back to her as if she were still there. Anyone who has ever lost a loved one or a spouse will find themselves relating to Graham here and it is worth noting that many therapists suggest that it can help to ease the sense of loss to talk out-loud as if the departed were really there. Graham ultimately seeks a different means of coping with the loss of Grace, but the scene is still a touching one. So is Ryan’s eventual confession to Graham that he considers him to be more of a “proper” family than Ryan’s absentee dad.

The episode also gives us our first glimpse of Yazmin’s family. We learn that she still lives with her parents and that her family is loving yet aggravating, with a conspiracy theorist father, a mother who is more concerned about who Yaz is dating than her career as a police officer and a younger sister who mocks her work yet has no job of her own. This gives us something of a sense of what Yaz is trying to escape, though she’s still the least developed of The Doctor’s new companions.

By and large, “Arachnids In The UK” is a serviceable Doctor Who episode. It succeeds in spite of its flaws, which are largely limited to presenting us with characters who are much more interesting than the monsters. Still, the monsters are competently handled and whatever else may be said about this episode it is not dull.

Abandon This Article Ye Who Would Avoid Major SPOILERS. 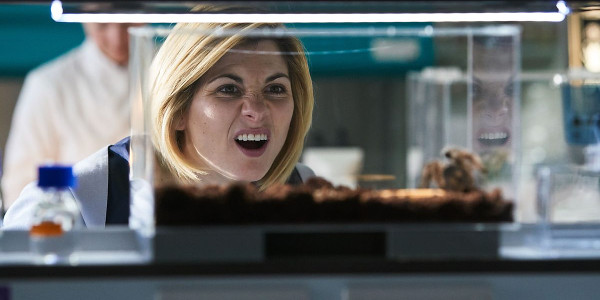 There are two chief problems with “Aracnhids In The UK” – its actual villain and its resolution. The revelation that Jack Robertson (who the writing does a poor job of pretending is not based on Donald Trump) is responsible for accidentally creating an army of giant spiders thanks to his lowest common denominator business practices is hardly surprising. Indeed, the general plot of “Arachnids in The UK” would not be out of place among the stories of The Third Doctor, where the villains often were corrupt businessmen or unscrupulous scientists. What is surprising is that Robertson does not suffer any comeuppance for his actions and The Doctor doesn’t even threaten to expose his ambivalence over the death of so many people to the public

Robertson’s literally walking away after killing the giant mother spider would be anti-climactic enough even ignoring the lack of resolution to the rest of the plot. It is never clarified, for instance, if the people webbed up in the cave under the hotel are alive or not. One also feels The Doctor could have thought of a better plan for dealing with the mutant spiders than luring them into a panic room and letting them starve to death – maybe get them into a room on the TARDIS and then carry them off to a planet where giant spiders might live without damaging the ecosystem? These questions are enough to kill whatever message Chris Chibnall wanted to make, though the action is just gripping enough to make the episode average out as decent rather than good.