This decade has been a good one for Disney Animation. After a string of hits – Frozen, Big Hero 6, Zootopia, Moana – the studio has now retaken its crown from Pixar (a company Disney actually acquired in 2006 and which has recently suffered through a few unimpressive sequels). And while there are many who will say Frozen marked the start of this new Disney renaissance, I’d argue it actually began one year earlier with 2012’s Wreck-It Ralph.

Wreck-It Ralph was a total surprise. On face value, it looked like just another film banking on nostalgia, one that’d be crammed with enough references and Easter eggs that no one would notice its paper-thin story and characters. And yet, Wreck-It Ralph was an endearing film with a message that resonates with both kids and adults. It was wildly imaginative in its depiction of video game characters after-hours, and its script packed in as many laughs as it did references – none of which felt forced or out-of-place. John C. Reilly as Wreck-It Ralph and Sarah Silverman as Vanellope von Schweetz was perfect casting, and their performances elevated the material, bringing an unexpected authenticity to those moments that tug at the heartstrings.

As its sequel, Ralph Breaks the Internet is almost as surprising. Swapping out the 1980s arcade references for internet memes and jamming in as much of Disney’s lucrative IP as possible, the film still manages that delicate balance of heartfelt story and pop culture explosion. The creativity is still there in everything from the anthropomorphized web-browsing to how those more recognizable characters are used, but it inevitably lacks a bit of the first’s originality. And yet, the emotional arc of Ralph Breaks the Internet is just as beautiful as ever, possibly even surpassing the first in its timeliness and execution, with both Reilly and Silverman again giving top-notch performances.

Ralph and Vanellope’s friendship and the way it developed was one of the many charms of Wreck-It Ralph, and it’s at the very core of Ralph Breaks the Internet. In this film, Ralph is coming to terms with the realization that Vanellope is growing restless with their comfortable, predictable life at the arcade. Wanting to make Vanellope happy drives everything Ralph does, from their trip into the Internet in search of a part to fix her game, Sugar Rush, to the many memes Ralph recreates in order to go viral and secure the funds needed to buy the part. But over time, trying to fix Vanellope’s game becomes more about keeping everything the way it was, stifling Vanellope’s growing dreams and driving them apart.

Like its predecessor, Ralph Breaks the Internet smartly approaches its themes, illustrating that sometimes we have to let go of those we love in order for them to grow and be happy. It’s a message that speaks to both the kids and parents in the audience, imparting its lesson in a way that never feels phony or false. In fact, it’s easy to imagine this film becoming a go-to watch for those parents with empty nests or kids moving out on their own for the first time because it so perfectly sums up the many emotions that come with that transition.

Beyond its emotionally resonant story, Ralph Breaks the Internet is an excellent satire of Internet culture. There are activities like eBay auctions depicted with real auctioneers or pop-up ads as obtrusive street vendors which are neat, but the way in which we, the Internet-user gets depicted is frighteningly on-point. With a design that looks more than a little (and probably intentionally) like a Funko Pop! vinyl figure, Internet users are a mindless hive moving from one distraction to the next. It’s an extremely apt portrayal of today’s Word Wide Web community, but perhaps the harshest truth comes when Ralph learns the number one rule of the Internet – don’t read the comments. It’s a sad reality that a family film must include such an important aside, but it’s indicative of how pervasive Internet culture is – both the good parts and the bad – and it’s why Ralph Breaks the Internet satire works as well as it does. 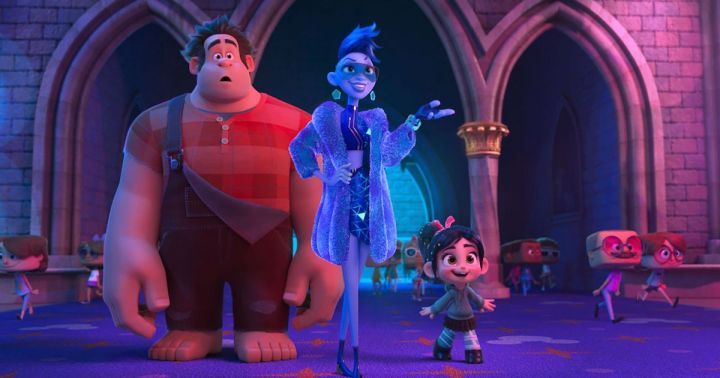 The Internet allows for a whole new cast of characters to join Ralph and Vanellope, and while none are as memorable as the supporting cast from the original (a few of whom do appear appear here, like Jake McBrayer’s Fix-It Felix and Jane Lynch’s Sergeant Tamora), they work well within confines of this story. Gal Gadot is great as Shank, a racing star from an online game who becomes a new friend to Vanellope. Taraji P. Henson is equally good as the buzzworthy algorithm, Yesss who helps Ralph in his rise of Internet stardom. Both characters give Ralph and Vanellope the chance play off someone else, which becomes crucial as the two learn that just because they’re best friends, they don’t need to be each other’s only friends. Elsewhere, Alan Tudyk keeps his streak of appearing in practically every Disney movie alive, here lending his voice to KnowsMore, a search engine, and Bill Hader proves an excellent choice for Spamley, a pop-up advertiser who shows Ralph around the nefarious dark web.

Ralph Breaks the Internet is really the only choice for families hitting the movie theater this holiday weekend, but it certainly won’t disappoint. Not only does it come with all the cameos fans could want from the many properties in Disney’s stable (Princesses, Marvel, and Star Wars, oh my!) but it works them in alongside all the Internet references in way that doesn’t overwhelm the story. In fact, the best cameos – like the highly anticipated scene in with every Disney princess ever – work best when they are in service to the story. And that’s really why Ralph Breaks the Internet succeeds where so many sequels fail – its central story of Ralph and Vanellope’s friendship grows out of the original and builds on it, giving audiences a story that’s not only wildly entertaining but one worth telling.