After several weeks of false starts, “Asylum” proves to be the first Titans episode that truly feels like a Titans episode, rather than a crossover with a different DC Comics show (ala “Hawk and Dove” or “Jason Todd“) or a backdoor pilot for another series (ala “Doom Patrol.”)

Discovering that her birth mother is still alive and in the clutches of the mysterious group known only as The Organization, Rachel Roth is eager to try and mount a rescue. The rest of her friends are wary, however, since venturing into the lion’s den seems like a really bad idea. Besides, the only proof they have that Rachel’s birth mother is still alive and being held in a strange asylum run by The Organization is the word of Dr. Adamson – the Organization operative they just barely managed to capture alive.

Still, when Rachel proves determined to rescue her mother and willing to go it alone if she has to, Gar goes along for the ride. They are quickly captured. So are Dick and Kory when they go chasing after their younger charges. With her friends being tortured and their lives being threatened if Rachel refuses to play along with The Organization’s plans for her, will Rachel be able to find a way to fight back? 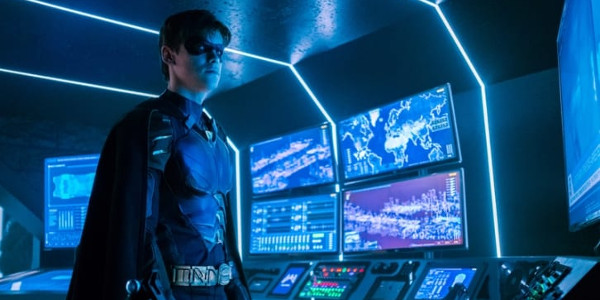 As in most of the previous episodes, Kory and Gar are reduced to supporting roles, with their scenes in the asylum focusing on precisely how they are tortured by The Organization, who seem to somehow know more about Kory’s abilities than she does. The lion’s share of the episode is focused on Rache (as she works to save her friends and her mother) and Dick Grayson, as he undergoes an internal struggle while trussed-up and doped-up. While Dick being mentally beaten up by his tween self while being told he has to stop blaming other people for his problems and move on is a little on-the-nose as far as metaphors go, it does suggest the series is finally ready to move on from Dick’s storyline and start working on more underdeveloped subplots, such as Kory’s amnesia.

Thankfully, even though Kory and Gar are given the short end of the stick again this week, their scenes are competently written and acted. Anna Diop and Ryan Potter both consistently deliver fantastic performances, regardless of how little screen time they have. Indeed, Potter has perhaps the most difficult task of all the actors, having to establish Gar’s character with half the time, as he tries to reflect Gar’s horror and what his “other self” did while he was in beast mode.  It isn’t much fun when you’re a vegan were-tiger who wakes up tasting blood you know isn’t yours.

The only real flaws this time around, apart from the continual focus and pacing issues, are some slight inconsistencies with the effects.  In the final scene, as Kory is burning down the Asylum, she emerges from a flaming doorway showing no signs of discomfort. While I believe that Starfire in the comics is fireproof, the clothes she is wearing are not. It is a minor point to be sure, but one of several things that suddenly take you out of the episode. Despite this, Titans is finally starting to feel like it is actually about its title team.