WARNING: The following review has been deemed potentially stressful for certain audiences. As such, we issue this trigger warning in the interest of the general well-being of our readers.

If you are a Conan purist who disapproves of any additions to the lore of Hyboria that were not written by Robert E. Howard himself, know that this comic will bring you no joy. Nor will it please those around you should you feel compelled to explain why a Stygian would never pray to Crom.

If you are the sort of Red Sonja fan who is deeply offended by the idea of Sonja wearing climate-appropriate clothing rather than trouncing through the snowy tundra in nothing but a few scraps of chainmail and a pair of boots, know that this is not your cup of tea and carry on.

If you are a frequent viewer of certain YouTube channels where comic books are crumpled up amid complaints about how “social justice warriors” are destroying the American comic book industry, you should not read this book.

The rest of you may read on.

It has been 15 years since Dynamite Comics acquired the license for Red Sonja and many different visions of Sonja have appeared under their banner in that time. This is nothing new, as the legendary Frank Thorne noted in his The Wizard and Red Sonja stage show, where a dirty-minded wizard becomes besieged by the various versions of Red Sonja that he’s pulled from across time and space. (You can watch a video of the show from San Diego Comic Con 1978 here.)

Thorne’s conceit was later brilliantly justified by the the excellent Legends of Red Sonja mini-series, which explored several conflicting stories regarding Sonja’s origins and who she is, as we considered the idea that many of the tales of Sonja’s adventures were presented by unreliable narrators. The end result? So long as a writer sticks with the central idea of a red-haired woman warrior who does not suffer fools to live, there is no wrong way to tell a Red Sonja story.

Do you want her to be the leader of a band of mercenaries as she was in the original Roy Thomas Conan comics? Or do you prefer Sonja as one lone warrior against a world that has little use for women like her? Do you like the idea of Sonja as a chosen of the war goddess, blessed with divine fighting skills? Or do you prefer Sonja as a tomboy teen who learned how to fight and hunt as good as any man on her own? Do you want a Sonja who is chaste and sworn only to love a man who can best her in a fair fight? Or do you prefer a free-loving, carousing Sonja who has an eye for the ladies as well? All these visions are valid and the multiverse is big enough for many Sonjas.

I mention this because there are many who will decry this fifth volume of Red Sonja as an abomination because (among other reasons) it dares to be funny. The general tone of Mark Russell’s script evokes memories of Mel Brooks’ History of the World: Part One and Monty Python’s Life of Brian. It pokes fun at the ancient world and all the cliches of sword-and-sorcery, as we are presented with Dragan The Magnificent – a would-be emperor who is pulling a Number Six on the world of Hyboria while delivering chain-letters to neighboring kingdoms warning them of the dangers of refusing to be chained. 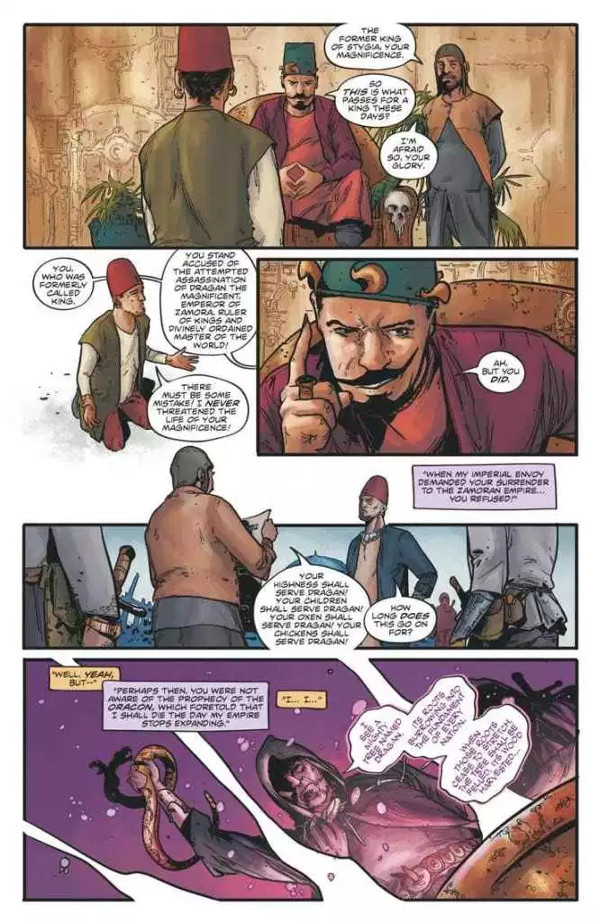 This humor is not applied to Sonja herself, who finds herself appointed the new Queen of Hyrkania after the previous rulers abdicate the throne when word arrives that Dragan and his armies are coming to have their way with their horses and ride off on their women. (Or is that the other way around?)  This leaves Sonja facing impossible odds with no hope of victory. In other words, it’s business as usual for Red Sonja.

None of this will be a shock to those who are familiar with Russell’s previous work on The Snagglepuss Chronicles or The Flintstones, where he also mixed comedy and drama to great effect along with a fair bit of social commentary. Of course I can’t begin to see how the story of a power-mad despot who has come to believe his own hype could possible be seen as culturally relevant today but it hardly matters. Russell does a damn fine job writing Sonja as a character and proves as skilled at plotting a thrilling action sequence as he is at writing witty dialogue.

Artist Mirko Colak wisely plays it straight with the artwork, delivering the same gritty sensibility that backed his work on Conan. The action sequences are superbly blocked and perfectly capture the aesthetic of Howard’s Hyboria. This only adds to the humor when Russell’s script turns comic, as the text seems to conflict with what appears to be a traditional sword-and-sorcery comic. Indeed, Colak’s designs are far more realistic than those of many an earlier Red Sonja artist. The color art by Dearbhla Kelly offers the perfect finishes, with vivid colors adding variety to even the harshest of desert backgrounds.

Perhaps the strongest aspect of this issue is that one need not be familiar with Red Sonja to enjoy it. Ignoring the accessible humor, Russell’s script avoids any lengthy exposition regarding Sonja’s history or the state of the world. Everything that must be explained is handled naturally through the dialogue or shown through the action, such as Sonja’s gift for strategy as she methodically tackles a horde of bandits.

There are those who will turn up their nose at this book because of its use of comedy or because it dares to depict Red Sonja in something other than her traditional costume. Let them. Comicsgate may not approve of it, but Mark Russell and Mirko Colak have delivered a Red Sonja that can be enjoyed by people who read comics rather than wanking over cover art.