Opening worldwide this weekend is the third installment of The Hunger Games – Lionsgate’s multimillion dollar earning franchise based off Suzanne Collin’s insanely successful YA fiction series of the same name. Needless to say, The Hunger Games: Mockingjay – Part 1 is easily the year’s most anticipated film and is predicted to dominate the box office for this and possibly more weekends to come.

Basically, whether Mockingjay -Part 1 ends up being the weakest of the franchise’s four films or not, it’s already bolstered by the massive success of its predecessors – The Hunger Games and Catching Fire. Plus, being the first half of the franchise’s climactic final chapter, Mockingjay – Part 1 will be required viewing for anyone invested in the series’ outcome.

Over the course of the first two films, audiences have been introduced to Katniss and her struggles living under the Capital’s tyrannical rule. We understand (as best we can) her relationships with her family, mentors, and the two men in her life: Peeta and Gale. And we’re more than familiar with the series’ underlying political themes of despotism and revolution.

All of that is present again in Mockingjay Part – 1, and casual viewers and die-hard fans alike don’t need a rehashing of all that information. Instead, let’s focus solely on what this film manages to achieve.

Here are three things The Hunger Games: Mockingjay – Part 1 does well, and one thing it doesn’t.

We all know how perfectly Jennifer Lawrence embodies Katniss’ determination, abrupt manner, and soft heart, and Mockingjay – Part 1 only cements this further. In fact, this film gives us a more introspective Katniss than we’ve seen before as she spends a vast majority of her time debating whether or not she’s cut out to be the face – the “Mockingjay” – of Panem’s revolution. Especially when it begins putting those she loves, those she fought so hard to protect, in even more danger.

Gale has spent most of the past two films on the sidelines, but this time Liam Hemsworth is given a far more substantial part to play, and he does well in the role of brooding soldier. Josh Hutcherson, Woody Harrelson, and Elizabeth Banks have had their roles slightly downsized, but each turn in fascinating performances seeing as each of their characters – and Peeta especially – are now in drastically different circumstances. The late Phillip Seymour Hoffman is also spectacular, as expected, and his confidence in Katniss’ ability to inspire is contagious and at times gleeful.

Julianne Moore’s President Coin is cool and reserved, but at the same time a kindred spirit of Katniss, desperately fighting not only for District 13’s but all of Panem’s freedom. Moore gives Coin an iron will, with a hint – only a hint, really – of warmth underneath her steely nature.

Most intriguing, however, is Donald Sutherland’s President Snow. An obviously villainous character from the get go, Sutherland has managed a subtlety with his performance throughout the franchise, but in Mockingjay – Part 1 we see him fully embrace Snow’s despotism and arrogance – and it’s chilling. 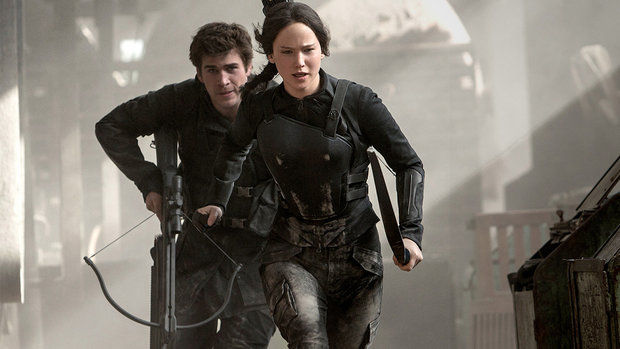 After the events of Catching Fire, Panem is entrenched in rebellion as more and more Districts begin to join the uprising. The Capital’s hold is weakening, but as control continues to slip away their tactics for keeping the peace become more deadly. No longer are people afraid their children will die in the Hunger Games, but instead fear their whole town will be fire bombed. Public executions and peacekeeper brutality are littered throughout Mockingjay – Part 1, keeping the fear of oppression ever present and making clear the all too real risks that come from defying such a tyrannical government.

Francis Lawrence took over from director Gary Ross with Catching Fire, and when he did so the franchise gained a greater level of maturity. And while Mockingjay – Part 1 doesn’t follow the same pattern as its predecessors, it does manage to create a heightened sense of danger. Mockingjay, the novel, is for the most part a war story, and what we see in this film is reflective of that.

At one point a hospital is mercilessly bombed, later rebels are mowed down by peacekeepers in a hail of bullets, and during an aerial attack we see people huddled for safety in underground shelters that shake with every impact from above. It’s all very reminiscent of wartime footage and it adds an unnerving level of realism to Panem’s struggles. 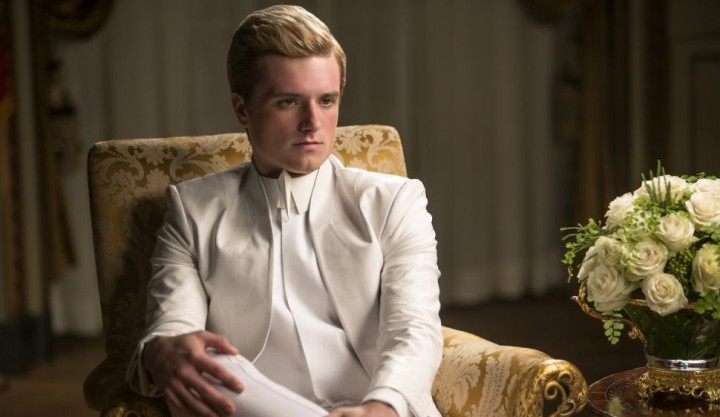 These greater risks are a result of the tricky political game being waged alongside the rebellion in the streets. At the end of Catching Fire Katniss was whisked off to District 13, while Peeta was captured by the Capital. Now, both have become puppets of propaganda, delivering whatever message either the rebellion or Capital wish to send.

It’s pretty evident from the start that Peeta is simply saying or doing whatever they force him to, but still there are those within District 13 questioning his loyalty. This is a troubling development because it demonstrates how convincing and impactful the Capital’s propaganda can be, and that its truthfulness matters little. For Katniss, however, she struggles with the scripts fed to her as she’s never done well with being told what to do. Eventually, they realize her message needs to be spontaneous as that’s what her authenticity stems from.

This dichotomy between Peeta’s convincing lies and Katniss’ authentic and spontaneous response is an interesting exploration of propaganda, and it’s usefulness as a political tool. Where previously we watched Peeta and Katniss keep up appearances as a happy couple while honestly expressing their feelings in the arena, now we watch as the two popular victors are made into powerful tools of propaganda, pitted against one another in a war for the airwaves.

Only Half The Story 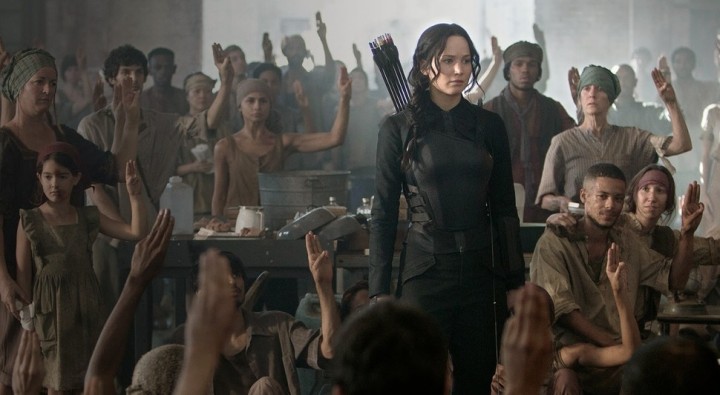 For all that’s good about Mockingjay – Part 1 (and there really is much) there’s no denying this film is hurt most by being an incomplete story. The trend of splitting a popular franchise’s final installment into two movies isn’t going away anytime soon, and studios will continue to do so as long as we continue coming back.

Once both Mockingjay films have been released, no one will ever watch one without the other; it’s only half of the story for now. In that case, Mockingjay – Part 1 is not a waste of our time like some previous final acts that were split into two films. There’s no unnecessary or bloated material added in, all the information and development presented will be crucial in order for the series’ climax to carry the appropriate weight.

However, much of what’s happening in Mockingjay – Part 1 are discussions and debates about what the rebellion should do next. There a very few moments of action, and the whole film is more somber than any previous.  Mockingjay – Part 1 is a very reflective picture, with Katniss spending much of it lost in thought. Because of that, there will be some who will simply find Mockingjay – Part 1 to be slowly building towards nothing. And really, it’s admirable that Lawrence (the director) is able to inject the amount of tension he does considering how little actually happens.

There’s no cliffhanger, the film just ends before its story is over, and that feels frustrating. Though again, its does manage something of a compelling ending, raising some unexpected questions about where the series goes next. It’s an ending that invites audiences to tune in next week– er, year. That is, if they can wait that long and don’t simply read the book first.