The madman Caleb Green lies dying, impaled upon the flaming debris of what was Queen Manor. A philosophical man might ponder the double irony – that in attempting to destroy the House of Queen that he blamed for ruining his life by turning the physical house of the Queen Family into a fiery deathtrap, Caleb Green only secured his own destruction.

But Oliver Queen is not given to such pondering. All he has is the fear Green touches in his dying moments. The fear that the good Oliver Queen does as The Arrow is not enough to make up for his own sins or the sins of his family.

His friends would argue differently, of course, but Oliver is even less given to discussing his feelings openly than he is to pondering irony. Still, one of his closest allies may give Oliver the strength he needs to carry on.

Meanwhile, as a troubled Oliver Queen studies the skills he will need for a battle in a boardroom, two lovers half-a-world away have an argument that will come to affect The Arrow very soon. For the League of Assassins have dispatched Sara Lance a.k.a. The Canary to hunt down the traitor Malcolm “The Magician” Merlyn. And Nyssa Al Ghul – daughter of The Demon’s Head – cannot shake the premonition that she will never again see the woman she loves.

Artistically, Arrow: Season 2.5 #23 is a something of a mess. The inks and color art remain at their usual level of high quality but there are signs of penciler Joe Bennett being rushed.  There are clear examples of both panel recycling and sloppy sketching in the middle of the issue’s action scenes.

Yet, there are also examples of the greatness Bennett is capable of, such as his amazing gift for capturing the likenesses of the show’s cast. This is particularly apparent in the scenes between Nyssa and Sara, who look just like actresses Katrina Law and Caity Lotz. That being said, having the two arguing about Sara leaving to hunt Merlyn alone whilst naked seems gratuitous. 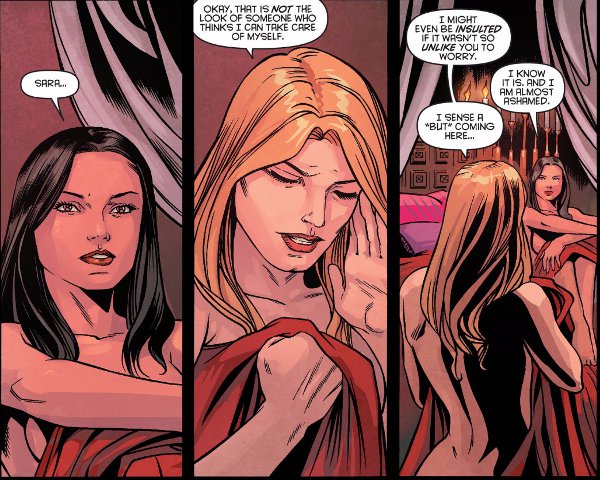 The script by Marc Guggenheim is similarly conflicted and showcases many of the problems fans of Arrow had with the show’s third season. For instance, Laurel is present as Green accuses Oliver of being no better than his criminal parents and does nothing to argue the point, though Oliver is clearly troubled by Green’s words. Indeed, Laurel barely has any lines at all in this issue apart from shouting “Oliver!” as she searches the wreckage of Queen Manor for Ollie.

As in season 3, Laurel is a fifth wheel – an unnatural presence in Oliver’s world whose inclusion in the story seems forced. The issue might have been better were Laurel to affirm her friendship with Oliver here and confirm that – in spite of everything that came between them – she believes he has changed and has become a good man. Alas, we instead get Felicity delivering another repetitive speech about how Oliver is far different than the killer he once was and how he should not doubt that.