Six months ago, investigative reporter Chloe Pierce had the perfect life. But the most perfect thing about it was her fiance, Philip. A photographer by trade, Philip was charismatic, brilliant and everything Chloe wanted in a partner.

That changed when Philip picked up a copy of the self-help book An Honest World by Astrid Mueller. Within a day, Philip was hooked on Mueller’s writing. Within a month, he was volunteering with Mueller’s “self-actualization” organization to recruit other people into her way of thinking. And within three months Philip was dead, having blown his brains out all over the kitchen floor of his and Chloe’s home.

Chloe lost more than the love of her life. She lost her mind for a time. And then she lost the will to live, attempting suicide herself but somehow surviving.

With nothing left to lose or live for, Chloe has thrown herself into an investigation of Astrid Mueller and her increasingly powerful organization. Because Philip is not the first person who has suddenly changed personalities or committed suicide in the wake of reading Mueller’s book. The trail Chole follows will lead her into the dark underpinnings of an organization that straddles the line between cult and social reform movement. And maybe, just maybe, it will lead Chloe to something stranger still… 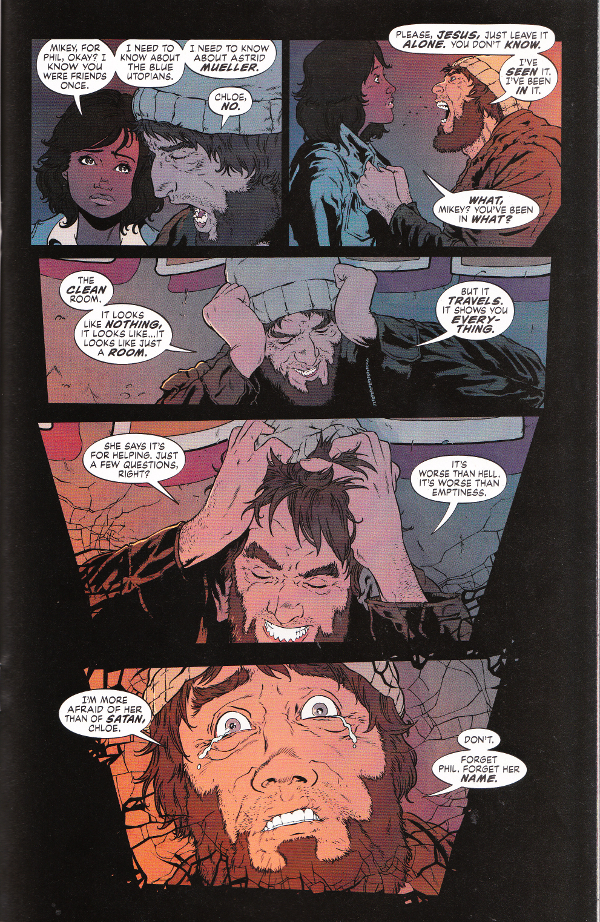 Those who follow Gail Simone’s work know that she can be capable of some truly dark stories. Her work on Secret Six alone contains some of the most disturbing imagery ever displayed in a DC Comics series. It seems surprising then that Simone would just now be writing a horror series for Vertigo Comics. What will surprise no one, however, is how good Clean Room is.

Chloe Pierce is quickly established as a likable protagonist. She is smart and confident, as most of Simone’s protagonists are, but clearly not without her issues or flaws. And the mystery behind Astrid Mueller – whose childhood we seem to see depicted in the book’s opening scene – proves compelling, instantly hooking the reader. 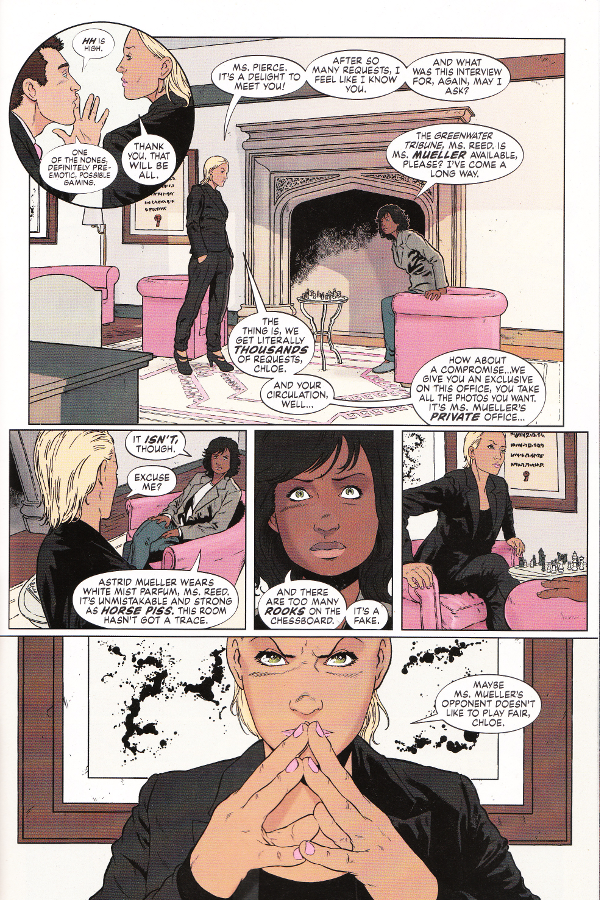 The artwork by 2000 AD artist Jon Davis-Hunt proves to be of equal caliber to Simone’s script. Davis-Hunt boasts a clean, traditional style one doesn’t often see in most modern horror comics, where grit and exaggeration seem to be the rule of late. The story flows naturally from panel to panel in a cinematographic manner, being well-displayed and well-paced.

Clean Room #1 will be satisfying to fans of Gail Simone and Jon Davis-Hunt’s previous works. It will also be an enjoyable read for fans of Hitchcockian thrillers and horror books in general.