It will surprise no one that All-Star Batman #1 is an excellent comic. How could it not be with the creative teams involved?

You have Scott Snyder – whose work has defined Batman in the modern era as surely as the writings of Dennis O’Neil and Frank Miller – writing both stories contained in this volume.

The legendary John Romita Jr. pencils the opening story, with Danny Miki (the inker on most of Snyder’s Batman run) and Dean White providing the finishing inks and colors.

Given that pedigree, it can be taken as read that All-Star Batman #1 should be an excellent book. But can it really be so grand as all that? Could it really be worth it’s higher-than-usual $4.99 price tag?

Yes, dead reader. Yes, it can.

The artwork for this issue is uniformly amazing. And if this first issue is any indication, this series is sure to do for Harvey Dent and/or Two-Face what Zero Year did for The Riddler, transforming a long-static member of Batman’s rogue’s gallery into a credible menace for the first time in a long while. 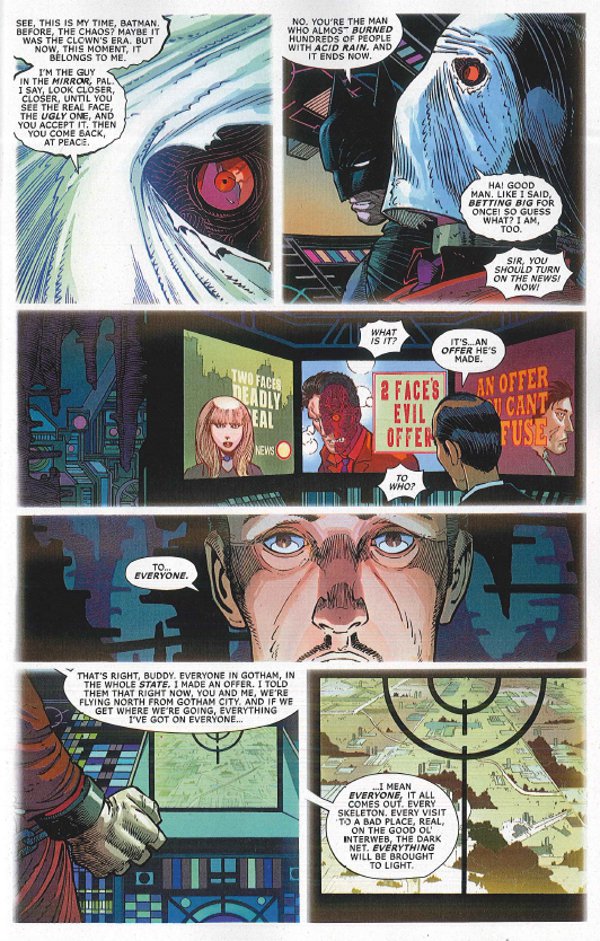 My Own Worst Enemy finds Batman on a most unusual mission of mercy, transporting an unwilling Two-Face across the state at the request of Harvey Dent. Their goal? A house which, for some reason, Harvey believes may somehow allow him to rid himself of his increasingly erratic other-half.

The problem is that Two-Face is very much aware of what Harvey is up to and has made arrangements to stop him. Having accumulated a number of secrets through his own personal information network, Two-Face has threatened to reveal everything to the world if Batman is successful. Between that and a promise of a payout stolen from the secret accounts of three major crime-lords to whoever kills The Bat and saves Two-Face, even honest men and women are on the hunt for Batman along with every bounty hunter and assassin in Gotham!

The back-up story, The Cursed Wheel, is a more low-key tale. Centered upon Duke Thomas – Batman’s latest partner – it’s a little less clear where this story is going, apart from it detailing the special condensed training regiment that Batman developed for his followers. Still, the tale is gripping enough despite my personal antipathy for Thomas as a character and my personal belief that the Batcave is getting a little crowded with all the ex-Robins running around.

With that caveat, I can happily say that this is a book that every Bat-fan should be reading. On every professional level and possible aesthetic metric, this is a great comic.