As far as The Ninth Doctor was concerned, Mickey Smith was an idiot. Mickey didn’t think too much of The Doctor either, but can you blame him?! After all, Mickey’s girlfriend, Rose Tyler, dumped him before running off on an adventure with The Doctor.

It was an adventure that, from Micky’s perspective, took Rose away for an entire year. Worse yet, Mickey became the police’s prime suspect when Rose’s mother reported her missing! And it wasn’t like he could tell the coppers she vanished with some alien in a time machine, could he?!

Still, time changes us all. Quite literally, in The Doctor’s case. And when Rose returned with a new Doctor in a new body with a kinder disposition, Mickey Smith found himself taking his own journey on the TARDIS. It was a journey that would see him travel to another universe and eventually lead him to the woman he would marry.

Ten years have passed since then and Mickey Smith is no longer Mickey The Idiot. Now he is part of an elite few – The Children of Time who protect the Earth in The Doctor’s absence. And he’s one of the few to possess The Doctor’s emergency phone number. So when Mickey stumbled across a case he couldn’t handle – involving missing people, mysterious gargoyles, odd lights in the sky and random people developing super-powers in San Francisco – he knew he had to call for help.

There’s just one problem. The Doctor who answered the call is The Ninth One. The one who can’t stand Mickey “The Idiot” Smith. And while Mickey doesn’t know nearly as much about preventing paradoxes as The Doctor, he does know that his future-self meeting the 2005 version of his ex-girlfriend or The Doctor’s other companion, Captain Jack Harkness, would be Very Bad Indeed. 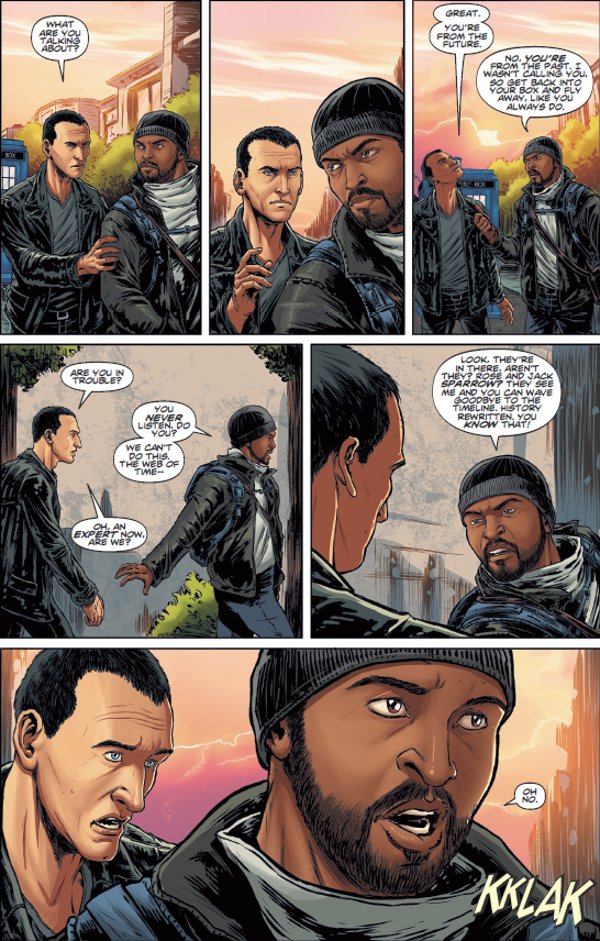 I’ve always felt that Mickey Smith was the most underrated of The Doctor’s companions in the modern era. Indeed, he doesn’t even get credited as a companion by some fans, having only appeared in one episode as a TARDIS regular before leaving The Doctor and Rose to stay in a parallel universe besieged by Cybermen! Despite this, Mickey is a prime example of The Doctor’s positive influence on most of his companions – proof of Mark Twain’s saying that “the really great make you feel that you, too, can become great.”

Given that, I enjoyed this latest issue of Doctor Who: The Ninth Doctor immensely. It’s always a treat to watch The Doctor thrown outside of his comfort zone and while Nine is one of my favorite incarnations, I can’t help but be amused by him being shown up by “Mickey The Idiot” as he’s trying to find his feet. Cavan Scott always does a fantastic job capturing the personalities of the characters from the show but I think he may have outdone himself with this issue.

Indeed, the only real problem with this issue is that the plot is a bit busy with character moments. We’re given a scene of some of San Francisco’s newfound superheroes talking but we’re not given much chance to get to know them beyond a Superman wannabe who takes a liking to Rose. And while some degree of contrivance is perfectly acceptable in a Doctor Who story, even I can’t believe the circumstances the story requires to get Rose to suddenly fall off of a building to push the plot forward. Bronze-winning gymnast, indeed!

The artwork by Cris Bolson is the best this series has seen yet as a monthly book. Bolson caricatures the actors from the original Doctor Who program perfectly. There is a dynamic sense of action to everything Bolson draws, with even the static scenes of two characters just having a conversation suggesting continual motion.

While long-time Whovians will get the most out of this story and the inherent humor of throwing the modern-day Mickey Smith against an older (from his perspective) Doctor, this issue is amazingly accessible to new readers. If you’re a comic fan who likes superhero stories who has wondered about the fuss over this Doctor character, this would be a fine first issue to start with.