[SPOILER WARNING: The following review contains SPOILERS for both the Injustice: Gods Among Us video game and the tie-in comics.]

Another world. Another time. The Joker put his theory that one bad day could tarnish even the most sterling of souls to the test. The end result was the destruction of Metropolis and the death of Lois Lane and her unborn child. The Joker’s victory was short-lived, however, and he laughed his last laugh as Superman gave in to rage and killed him.

For five years, Superman attempted to build a better world. As ally upon ally turned against him and more freedoms were sacrificed in the name of security, Superman became a tyrant. In a desperate gambit, Batman – leader of the Insurgency that rose to fight Superman – made contact with the Justice League of another world and recruited their heroes to help him bring down Superman and the Regime formed by the heroes and villains who supported the new world order.

Now, Superman is imprisoned and Batman is turning his attention to rebuilding society. Yet other powers seek to shape the chaos to their own designs and one of them has set their sights on Batman’s most loyal follower – Harley Quinn!

The most remarkable thing about this first chapter of Injustice 2 is how accessible it is to new readers. True, they may miss the little gags like why Harley is living in The Arrowcave and calling it The Quiver but the meat of the story is dished out smoothly. The opening talk between Bruce and Clark establishes the basics of the setting and the following scenes with Batman and Harley subtly showcase just how much this world has changed from the standard DC Universe that Harley Quinn has partnered-up with Batman. Such is Tom Taylor’s skill as a writer that he can manage this while delivering some hilarious Harley Quinn patter. 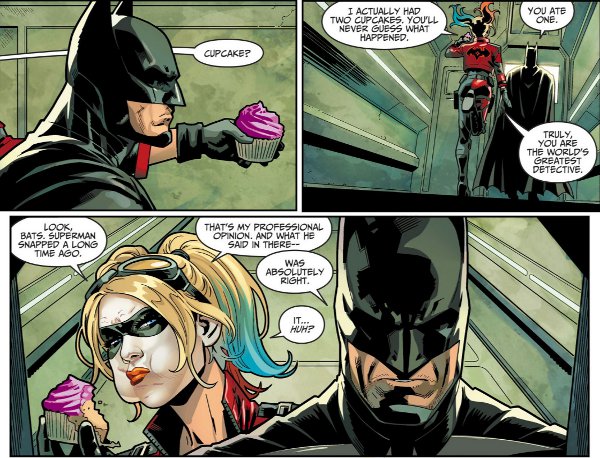 The artists of the original Injustice: Gods Among Us comic have returned along with Taylor and their work is in similarly fine form. Bruno Redondo is a fantastic and varied artist, equally capable of depicting the stoic Batman and animated Harley Quinn in the same panel while having them seem to occupy the same space. Juan Albarran’s inks find the perfect balance between enhancing and shading and colorist Rex Lokus finds the perfect shade for every situation.

I’d still suggest tracking down the original comics and playing the game before picking Injustice 2 up. It -is- a sequel, after all. Despite this, you could pick this book up and read it without needing much in the way of explanation and still find it enjoyable.