This final issue of Injustice 2 caught me off-guard. Not because of the contents but because I had no idea this was going to be the final issue! I suppose that most of the major events that occurred between the end of the original game and the start of Injustice 2 have been accounted for, but I still wish we could spend a little more time in this world.

I love having an honestly heroic Harley Quinn. I love married Ollie and Dinah. Most of all, I love all the little character notes that Tom Taylor subtly worked into every issue, like how Jonathan and Martha Kent are the only people Alfred Pennyworth will tolerate addressing him as “Al.”

Still, if the series must end, it could not have asked for a better ending. The action sequences of this issue are oddly understated, with the emotional moments packing the true punch. Bruno Redondo, Juan Albarran, Rex Lokus and Wes Abbott knock it out of the park one more time in bringing Taylor’s script to life. Hopefully they’ll continue to work together in some capacity at DC Comics in the future.

Reading this comic first thing as I sat down at the computer was something of a tradition for me on Tuesday mornings. I shall miss this series greatly and reread it often, which I think is the highest complement any artist can hope for regarding their work. I’m telling you for the last time – this series was a true classic and a must-read for anyone who likes superheroes.

The new Justice League Dark seek answers regarding the changing nature of magic at the Tower of Fate, but could one of their members be hiding a secret? John Constantine thinks so, but there’s treachery afoot that even the cynical Constantine won’t see coming…

Tynion IV twists the story and the knife like no other author and this story is a prime example of how he does it with style. While readers less-well versed in certain aspects of the DC Comics multiverse may be confused by this story, Tynion IV explains what little needs to be known and gives enough information for a Google search to research the rest of the unknown players.

The artwork by Alvaro Martinez Bueno and Raul Fernandez continues to impress, showing the same craft and skill seen during their run with Tynion IV on Detective Comics. With Brad Anderson on the colors and Rob Leigh providing the letters, this book is a clear contender for an Eisner next year on every level.

The means by which the hunter Eson Duul has learned to travel through time, space and reality stands revealed and his actions threaten to destroy all that is! Thankfully, Tarazan and Sonja are hot on his trail and well-prepared for a fight this time.

Hyborian purists and Robert E. Howard fans will surely be up in arms at this issue’s depiction of Cimmeria as a desert wasteland. I am willing to write this off, however, as a side-effect of the breakdown of reality which is mentioned in this issue. Ordinarily, Sonja and Tarzan would not be able to meet, being of two different worlds, so who is to say that Cimmeria might not have been altered by the same twisted magics?

At its core, this book is a ripping yarn meant to thrill the reader – a task it accomplishes admirably. Walter Geovani’s poses feel a bit forced at points, but the action of the issue flows smoothly enough otherwise and Simone’s script sizzles throughout. Damn the purists to The Abyss! This is a fine comic in the tradition of the original 1970s’ Marvel pulp comics.

Aspiring reporter Henrietta Tilney has just been given her shot at the big-time, interviewing the mad murderer Lord Harwood. The famed hunter insists he is innocent and Miss Tilney believes his claims of magic killing the people he stands accused of murdering. But who is responsible for the murders? And is Miss Tilney about to become their next victim?

Miss Tilney is an effectively written penny dreadful, though it suffers somewhat in this first chapter in that our title character barely seems to be involved in the action of the issue. The artwork is skillfully done, yet the animated style seems a poor fit for the Gothic aesthetic the writing seems to demand. Despite this, fans of Victorian-era horror and Sherlock Holmes stories will find much to admire in Miss Tilney’s misadventures.

Los Angeles is woefully unprotected when it comes to the craziness caused by mad scientists and costumed criminals – a fact that is made clear to Kate Bishop when she finds herself trying to stop a stampede of land sharks. Somebody needs to form a superhero team and, unfortunately, she’s the only person interested in doing the job.

Before she can blink, Kate finds herself with a camera-crew filming every aspect of her life and a team made up of an egotistical telepath, a heavily armed lunatic who thinks she’s living in a comic book and her dimension-hopping best-friend, along with her boyfriend and her mentor. Yeah. This is going to be awkward…

Fans of Kelly Thompson’s previous work on Hawkeye and America as well her recent work on Mr. & Mrs. X and Rogue and Gambit will find themselves on familiar ground with this series. The story is filled with the same wicked blend of twisted humor and high adventure. Those mourning the recent cancellation of Gwenpool will find this series to be in the same spirit and… well, presumably there’s someone who will be happy to see Quentin Quire in here, as well.

Stefano Casselli proves the perfect partner for bringing Thompson’ words to life. Caselli is adept at doing it all, whether he’s drawing land sharks or just showing two characters talking. This book is fantastic on every front and a must read for anyone who enjoys a good superhero comedy series in the same vein as Justice League International. 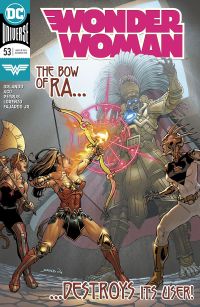 Recent arcs of Wonder Woman have been underwhelming to say the least. Currently, Steve Orlando is filling in while Diana awaits the talents of writer G. Willow Wilson (Ms. Marvel/Kamala Kahn co-creator), and the story he presents in the interim is perfectly adequate. A two-part adventure concluding in Wonder Woman #53, “The Enemy of Both Sides” finds Diana assisting Aztek – a lesser known DC hero who is the champion of the god Quetzalcoatl and which, unsurprisingly, this Nayeli Constant-version was co-created by Orlando – in her quest to defeat Tezcatlipoca. The task is right up Diana’s alley, however, things get a little complicated when Artemis – warrior of the Amazon splinter group, the Bana-Mighdall – tags along.

What makes “The Enemy of Both Sides” a bit more interesting than your run-of-mill, stop-the-evil-god story is setting it within the Aztec pantheon. Obviously, Wonder Woman typically deals in Greek mythos, but it’s neat to see her handle other rageful deities, too. Plus, Aztek proves to be a unique character with her own theological hangups that DC should perhaps trot out more often. Artemis, too, continues to be an interesting foil for Diana, offering a different perspective on the Amazons and their culture. In the end, this story is just a side adventure, but it’s setting up an arc which will become the bulk of Orlando’s mini-run (before the upcoming crossover with Justice League Dark). It’s an intriguing premise, having the Bana-Mighdall come out of hiding and invade, but it smacks a bit of the the awful Amazons Attack series and that’s worrisome.

The best part of this issue is the artwork – stunning and chaotically framed, the whole team delivers a wild and fierce battle between Diana and the giant, Tezcatlipoca. For a chunk of the pages, Hugo Petrus takes over art duties and he gives the fight a real grit. Throughout, Farjardo Jr.’s colors enhance the action, making it a bright but brutal brawl. And that’s really the big takaway of Wonder Woman #53 – a throw-down between Diana and a humongous Aztec destroyer god that’s entertaining but largely inconsequential.

The proof that Jean Grey was framed for murder is almost within the X-Mens’ grasp. Unfortunately, an ill-timed attack on Atlantis and the near-fatal wounding of Trinary in the middle of their mission threatens the team’s plans on two fronts.

The opening arc of this series comes to a satisfying conclusion. While not as full of grand ideas and wonderful character moments as earlier issues, Tom Taylor’s script delivers the action in a big way this month. Carmen Carnero does a fantastic job illustrating everything and Rain Beredo’s colors are perfectly chosen throughout.  I’ve never been much of an X-Fan, but even I love this series.